I’m sitting here in “Tehrangeles” watching the newest reality show, “Shahs of Sunset”. Westwood is the home of UCLA & the largest Persian population outside of Iran. How convenient as I nibble on ‘Sangak’ (a wheat-sourdough flat bread known to be Iran’s national bread) dipped in ‘Maast-o Moussir’ (yogurt with shallots) and Ghormeh Sabzi. My meal was purchased from Wholesome Choice Market, an Iranian market in Irvine that also sells a wide array of ingredients and food of international cuisine. While I’m enjoying one of my favorite cuisines, I watch in suspense the preview of the new reality show “Shahs of Sunset” broadcasting on March 11, 2012. Will this be the next Jersey Shore or Kardashian show? Or will it actually be somewhat educational? We shall see. 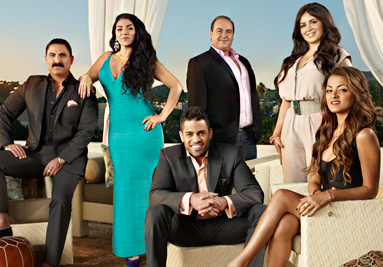 Meet the cast of the new Persian reality show, produced by Ryan Seacrest, “Shahs of Sunset“, following 3 males & 3 females. Some have compared it as a blend of “Jersey Shore” mixed with “Housewives of Beverly Hills”. The shitshow combined of both shows plus a lot more money than Jersey Shore. We all know that Seacrest has an eye for hit shows turned mindless guilty pleasures for many (i.e.: Keeping up with the Kardashians). These are shows that are exhilirating with controversy, high ratings and a lot of audience envy.

The Iranian-Jewish population in West Los Angeles is a group of charismatic individuals impossible to ignore. While they’re well known locally, the rest of the world may be confused by this seemingly oxy-moron of an identity slash religion. Iran.. Jews? Confusing to outsiders as Iran has now been an “Islamic Republic” for 40 years. Which is politically at war with the government of Israel and “Zionism”. Interesting to note though, that there are still Jews living in Iran today as well as synagogues.

The Iranian-Jews in LA drive flashy cars, sport incredibly expensive watches, throw rockstar parties, occupy table services at the hottest Hollywood clubs and own at least a third of the Real Estate around town. Most of them attended UCLA & USC, many with MBA’s & JD’s and are Lawyers, Doctors, Developers and Investors. They work hard (probably more smart than hard) and know how to play even harder. In the past 40 years, they have made a significant impact in the Los Angeles economy with their assets & presence. The interesting irony of this show is that the 3 guys are Jewish while 2 of the women are of Muslim descent. Interesting paradigm as they debate on the first episode about inter-marriage, a common conversation topic in LA.

The Iranian Revolution of 1979 Lead Most Jews to Flee

This show is not meant only to show off the rich lifestyles of Persian Jews. But to share the resilience of a small population of people who were kicked out of the “old country”. A term they commonly use to refer to Iran before the revolution of 1979 when the Shah was overthrown. Jews among other minorities and opposing political parties were persecuted. Some fled to their birthright of Israel, some to New York and Florida. Many eventually ended up in swanky Beverly Hills. There’s a total population of about 330,000 Iranian-Jews left in the world with only about 70,000 in the US. That’s a very small percentage compared to the 330 million population in the US. And what better time to showcase a culture of Middle Eastern people than now. So maybe, just maybe, it could shed light and change minds of ignorant Americans that not all of them are terrorists.

While the Jewish population of the world have been known to be an educated, resilient community in history, there is something about the savvyness of the Persian Jews that have been able to maintain the lavish lifestyle in Beverly Hills. With some money saved (although a lot of land and assets were stolen from them prior to escaping Iran), and the help of their tight-knit community, they began to buy small pieces of Real Estate. What would start as a small house, turned into a small apartment building. They would then pay off debt or refinance in the decades to come and are now grossing significant incomes for their families and generations to come. 9-5 jobs are uncommon for them. As you see in the video, confidently stated by the show’s most popular meathead, Mike Shouhed:

“We don’t work in buildings, we own them.”

That sophisticated way of looking at how to deal with money, money making more money, is one that I’ve used as a model. It’s the only way to retire by 40. Have a flexible lifestyle, be able to Travel the World and take care of one’s family through investments. Paycheck to paycheck and praying on a 401k is so 20 years ago.

I’ve become good friends with some Iranians, done a lot of business and partied with them at their Shabbats, Nowruz & lavish parties. They’re a fun bunch, and I look forward in watching this show in March. I do hope it will give the world some insight into their culture beyond the partying and money. But into a family-oriented culture that values Education while knowing how to have a good time. We shall await to see if the show turns more into a shitshow though.