India is a huge country separated by 29 states in a vast landscape of diversity. Although I’ve been 3 times, I feel as if I have barely scratched the surface of the country. On a recent trip, I spent one day in Amritsar to see the Golden Temple and took an hour ride to the Pakistan-India border “Wagha Border”. Naturally, I had to also make a visit to Chandigarh, the capital of Punjab, just 4 hours away by bus.

Chandigarh is the cleanest, safest (lowest crime rate) and most developed city in India. In 36 hours, I tried to jam pack as much as I could do, see and eat on the back of my friend Mogi’s bike. Best way to see the city is to rent a motorcycle, hire a rickshaw or a driver to take you around.

Chandigarh was the dream city of India’s first Prime Minister, Sh. Jawahar Lal Nehru and planned by the famous French Architect Le Corbusier. It is internationally known for it’s architecture and urban design, as one of India’s first planned cities. Picturesquely located at the foothills of Shivaliks, it is known as one of the best experiments in urban planning and modern architecture in the twentieth century in India.

“In 2015, an article published by BBC named Chandigarh as one of the perfect cities of the world in terms of architecture, cultural growth and modernisation.”

Today, it serves as the capital of both Haryana and Punjab. While it serves as the capital, it is not technically located in the state of Punjab, but instead as a Union Territory. The state of Punjab borders Chandigarh to the north, west and south, and Haryana to the east. Chandigarh has a population of about 1 million people which is minuscule for a major Indian city. This factor also contributes to the cleanliness and order of the city.

Approximately 80% of the population is Hindu, 13% Sikh and 4% Muslims. The remainder are Christians, Jains & Buddhists making less than 3% of that population. The major languages are Hindi, Punjabi and English.

Chandigarh derives its name from the temple of “Chandi Mandir” which is located in the vicinity of the site selected for the city. The deity ‘Chandi’ represents the goddess of power, the warrior Avatar of Goddess Parvati. The fort of ‘garh’ which laid beyond the temple gave the city it’s name, hence how the name “Chandigarh” came about as in ‘The Beautiful City’.

What to do in Chandigarh

Many of the city’s main attractions are located in Sector 1, (the way the city is divided): The Capital Complex & Peace Monument, Sukha Lake and Rock Garden.

Located in the Capital complex at 26 meters high, the Open Hand Peace Monument is the main attraction which stands for PEACE and reconciliation. French architect, Le Corbusier, designed this in mind as a place open for public gatherings, to discuss various social and civil issues. In essence, a place that would serve as a Center of Social Change initiated by the residents of the city for the improvement of the city. 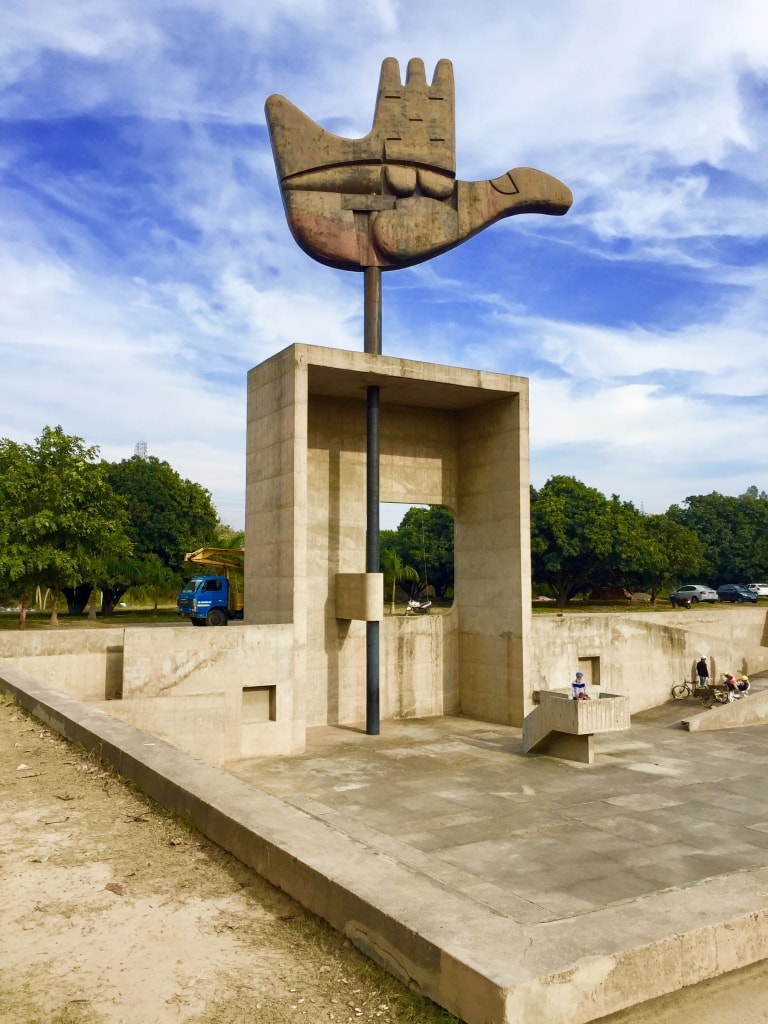 The hand is not fixed as it was made to move along with the direction of the wind. The City promotes peace. The city of the emblem says “Open to Give. Open to Receive“. 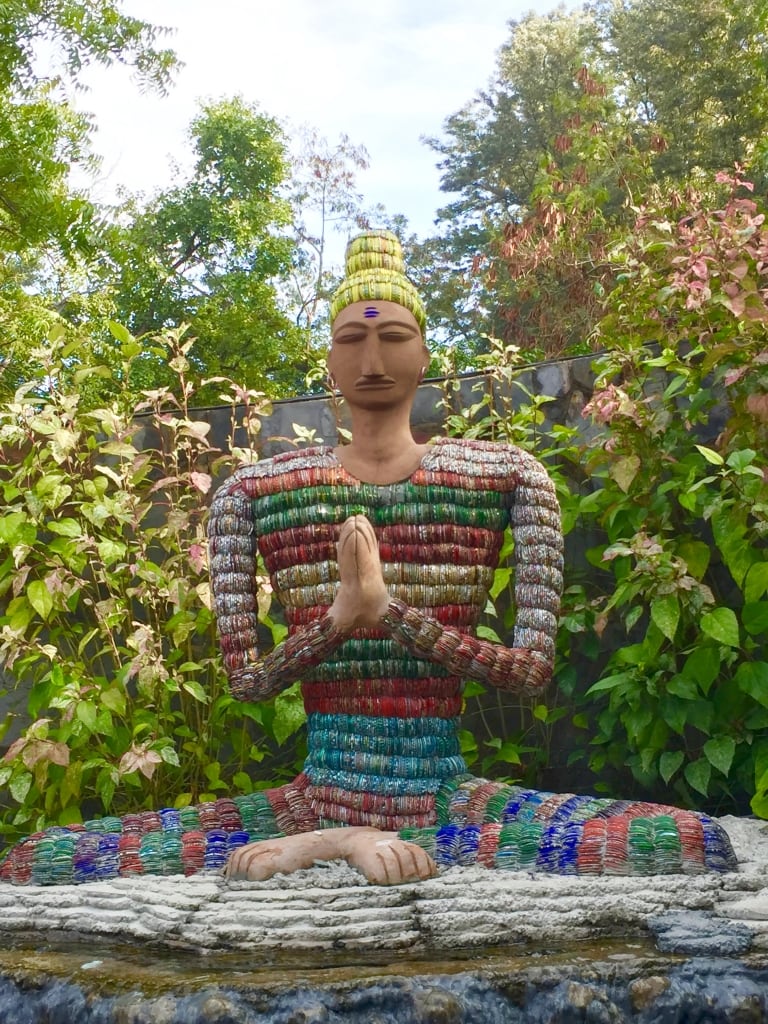 Nek Chand, a former government official  started the garden secretly  as a hobby in 1957. Spread across 40 acres, the mission was to create art with waste material as also a way to the environment. Trash such as: broken electric items, plastic, bangles, frames, mudguards, forks, handle bars, metal wires, play marbles, porcelain, auto parts, broken bangles (every little thing you could think of). 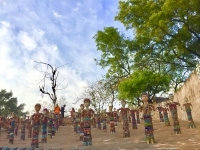 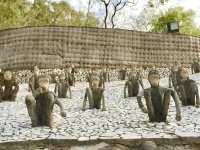 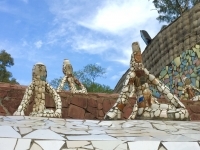 Rock Garden is open to the public for any visitors, any time of the week. As you enter, the first wall you see are made by white plastic electrical outlets. Long ago, it was covered with big stones. Today, it’s as if you’re touring another world with an adorable zoo of cute animals, huge natural waterfall and people. 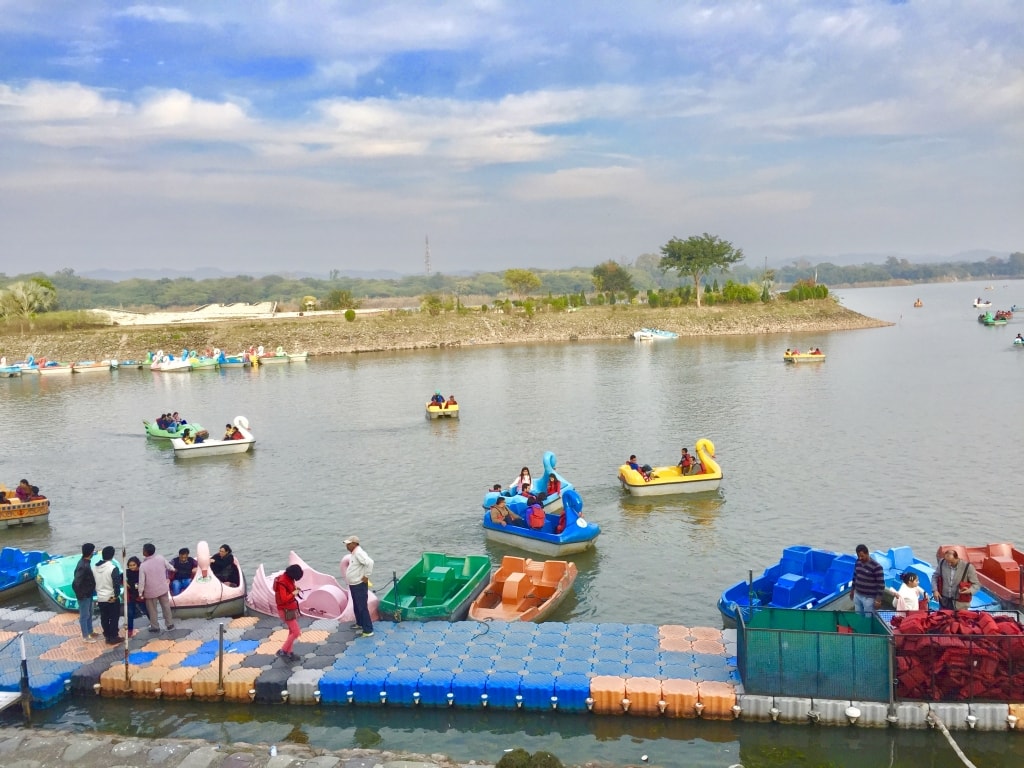 Located near Rock Garden, the artificial lake is an integral, central part of Chandigarh where locals go to relax with family and friends. The mood is serene and you could rent row boats, sailboats and/or hire someone to take you around. 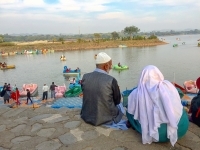 There is a mini-amusement park, arcade and pier for kids to play games and a small food court. This 3 km rain-fed lake was created in 1958 by damming the Sukhna Choe, a seasonal stream coming down from the Shivalik Hills. It has The Garden of Silence within it. Sukhna Lake is the venue for many festive celebrations, the most popular being the Mango Festival held during the monsoon season.

Situated in Sector 16, “Rose Garden”, is the largest rose garden in Asia, named after the former President of India, Zakir Hussain.  The garden is said to be spread about thirty to forty acres containing nearly 825 varieties of roses in it and more than 32,500 varieties of other medicinal plants and trees. It also hosts annual rose festival which is quite popular among local population.

Parrot Bird Sanctuary Chandigarh is a bird sanctuary and habitat of thousands of parrots, located in sector 21 Chandigarh India. It is notified under Section 18 of the Wildlife Protection Act, 1972. And is the second wildlife sanctuary in the city after Sukhna Wildlife Sanctuary. 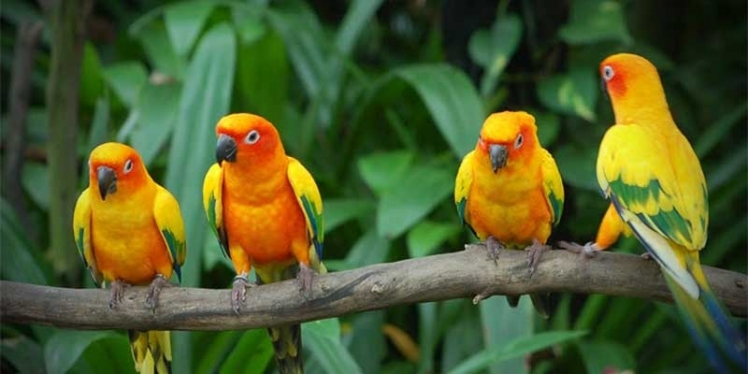 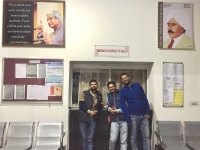 One of the most renown universities in India. I had the opportunity to spend some time there as my friend is studying for his PHD and introduced me to many of his friends. Universally, there is no better place than a college campus to witness young men and women flourishing into the change-makers of the next generation. It is a birth place of hopes and dreams, where ideas are debated and formed into realities. 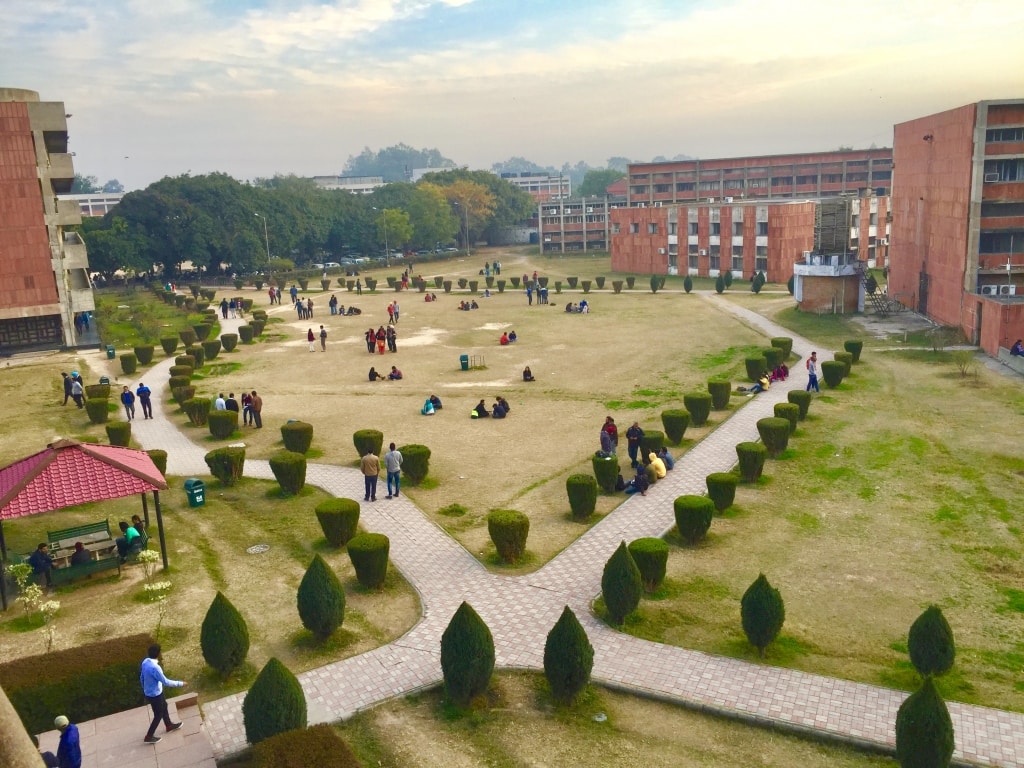 On this campus, students sit on the grass to exchange ideas, to share notes, to gossip, to discuss politics and plan which events to attend around campus. I loved being there. We stopped first for lunch as they have an outdoor foodcourt with 4-5 cafes in the center as we sat and people watched. After a day of sight seeing, we visited the library for a cup of chai, and then relaxed at the track field sharing conversations about the world. 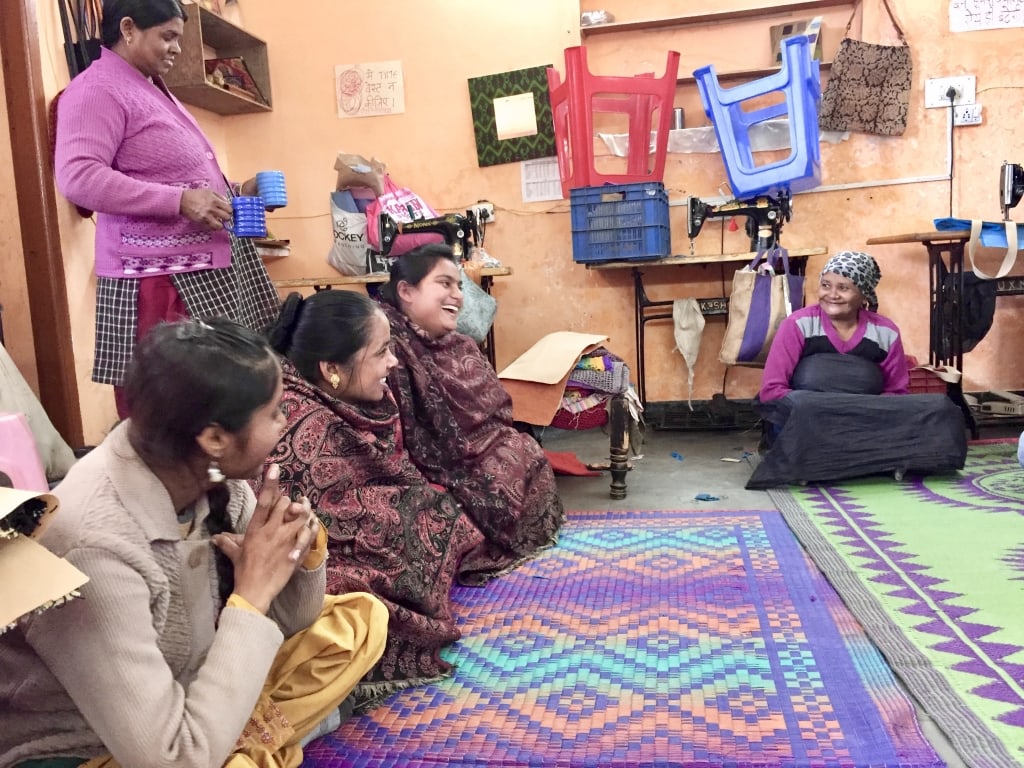 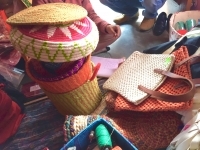 Visit Chotti Si Asha, a non-profit who’s mission is “to reach out to those on the fringes of our society and give them love and acceptance“. This includes street children, disadvantaged women and anyone who needs a helping hand.

Women come to sew, weave, and create at this safe 2-story center referred as the “Stitch Workshop” . Their crafts are then sold to retail stores, online and in various outlets. You could buy a wide variety of hand-weaved baskets, wallets, purses, travel totes, notebooks, special occasions cards, and more. I went on a shopping spree and it was magic that allowed me to fit it all in my luggage. 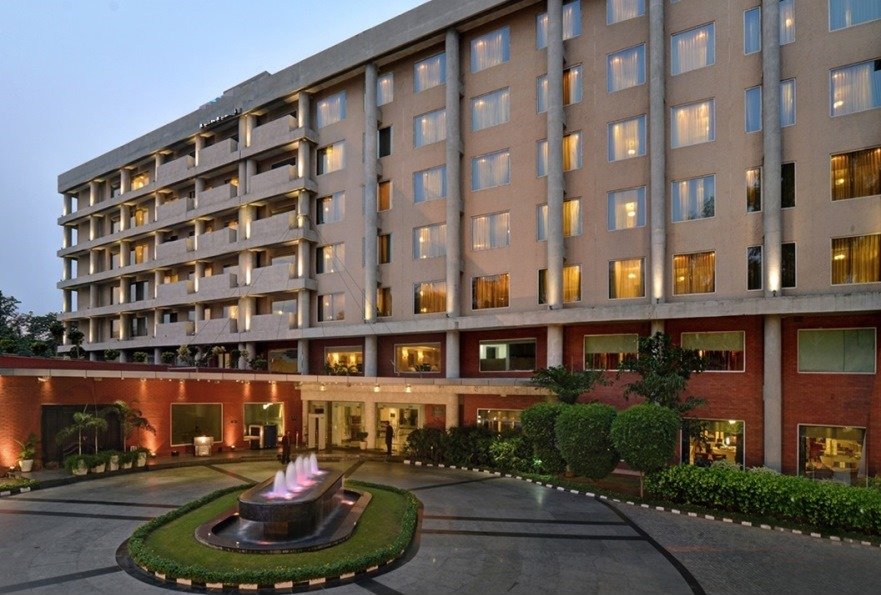 James Hotel: I booked this 4 star luxury/business hotel at only $70 a night. Conveniently located in Sector 17, a central, hip shopping area in the city. I took a 20 minute rickshaw ride from the train station, with the friendly front desk staff ready to greet me and take me to my room. A beautiful restaurant awaits downstairs with a lavish bar, as well as a London-themed pub connected to the hotel.

Near by Cities & How to Get There: 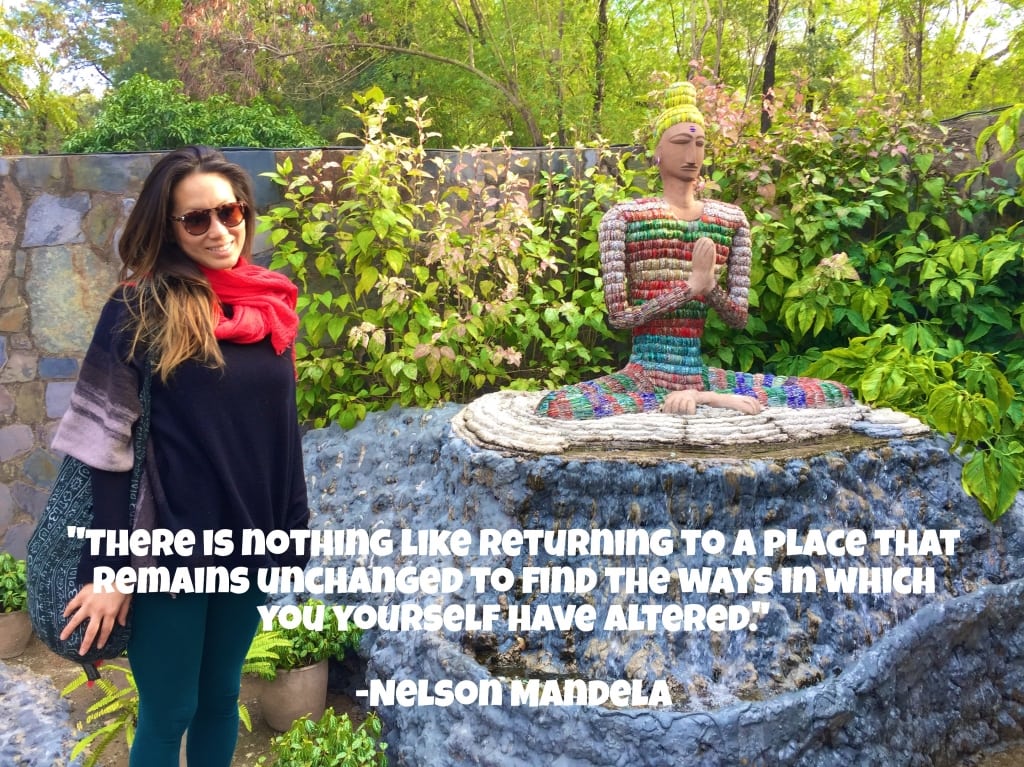 Visit the Official Chandigarh Tourism Site for more information and the Calendar of Events for festivals & holidays.