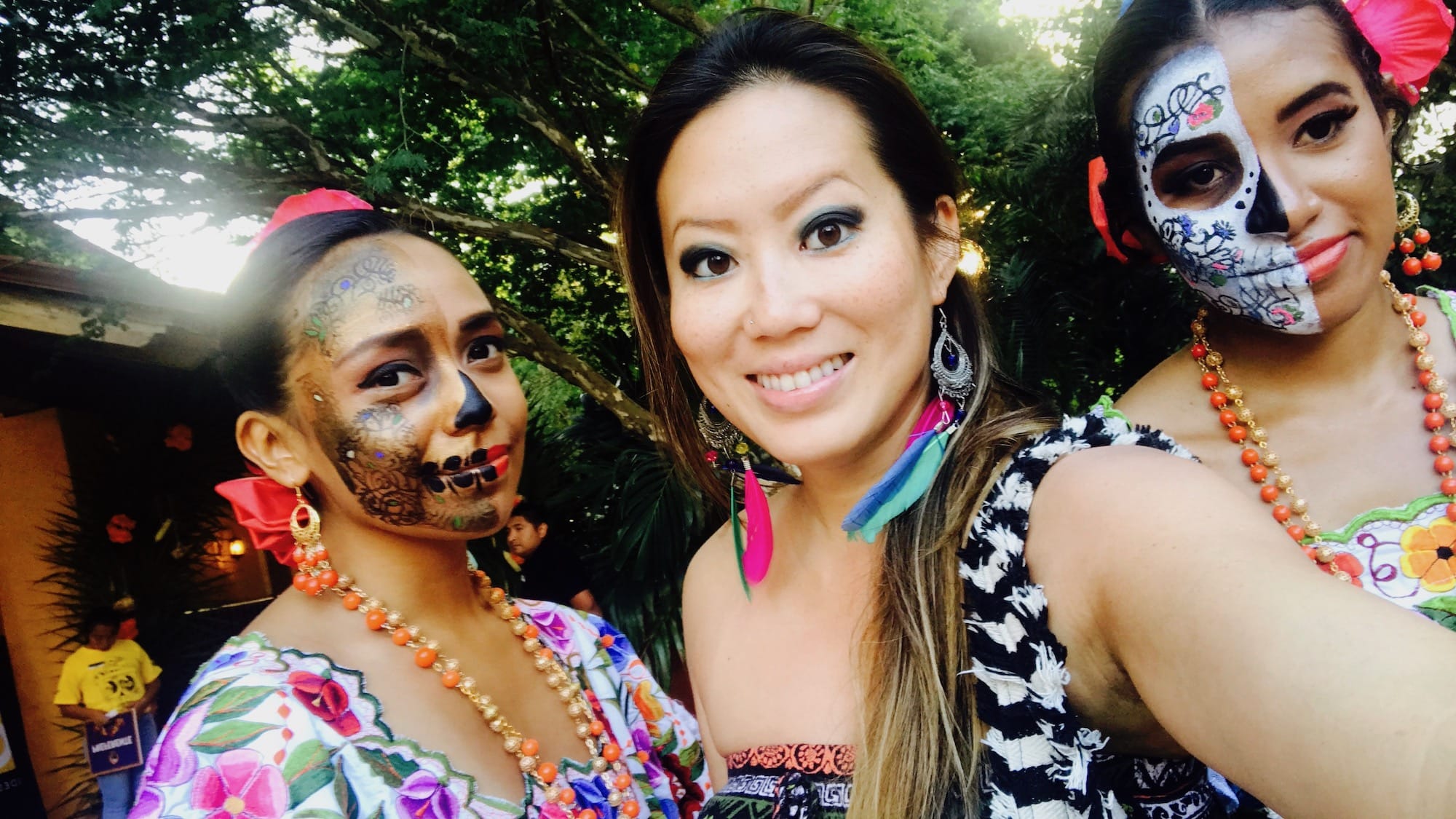 The best way to experience a holiday is in the country of it’s origin and with it’s people. I had the honor of celebrating the Day of the Dead in Cancun, Mexico this past October. The holiday is also known as “Día de los Muertos” or “Día de Muertos”. It is similar to our version of Halloween as it is around the same dates and has ties to the spirits of the dead (and Christianity/Catholicism). But the meaning and tradition behind Day of the Dead has so much more cultural meaning than what Americans have turned Halloween into. Mexicans celebrate these days by paying homage, honoring, remembering and praying to their dead loved ones. The history and traditions from generations before are deeply engrained into this holiday. But most of all, the soul connection to those that have passed are especially strong during these days.

While many cultures fear and avoid talking about the subject of death,
Mexican culture embrace it.
It makes death and the afterlife just as beautiful as life in so many ways. 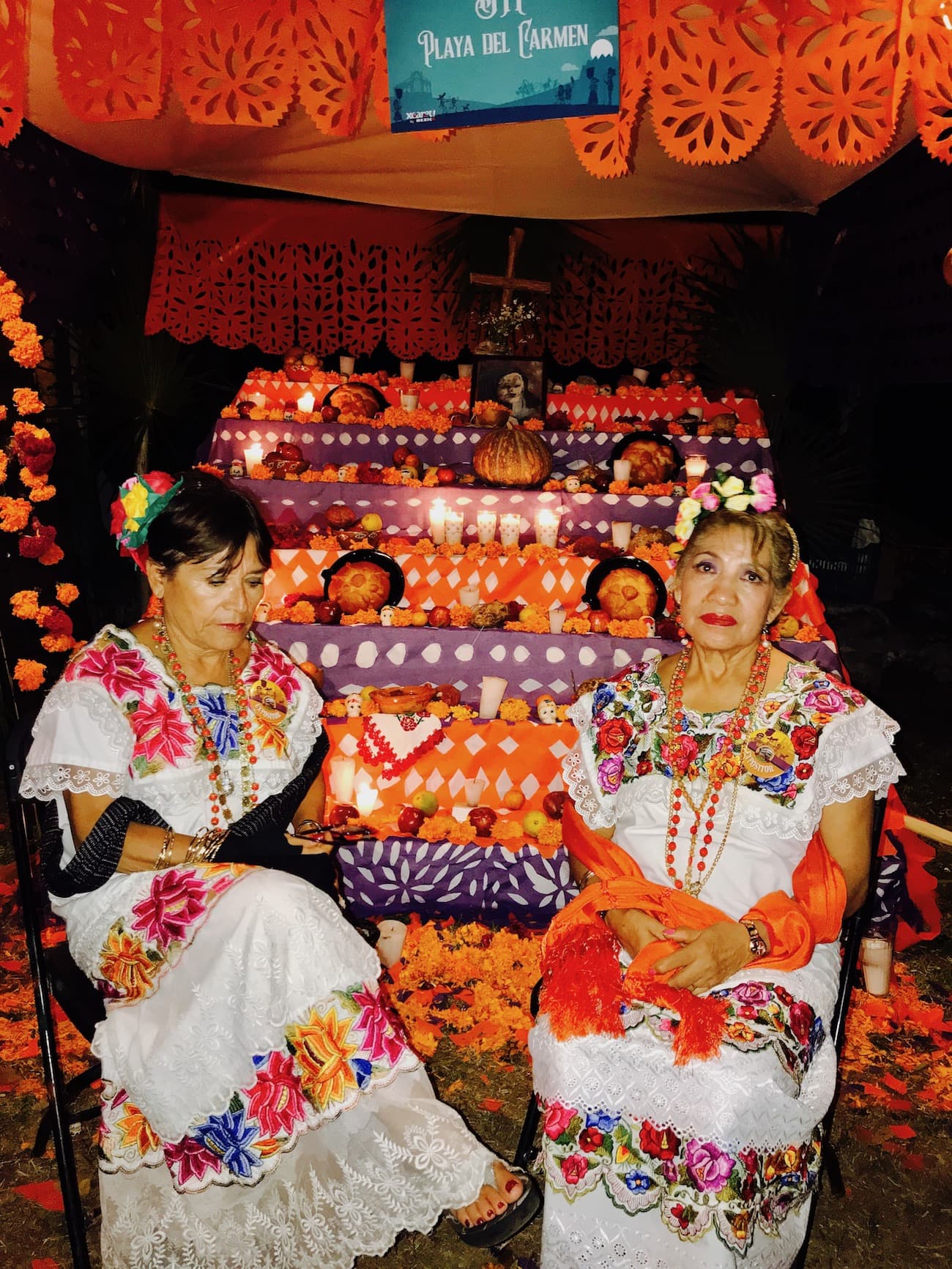 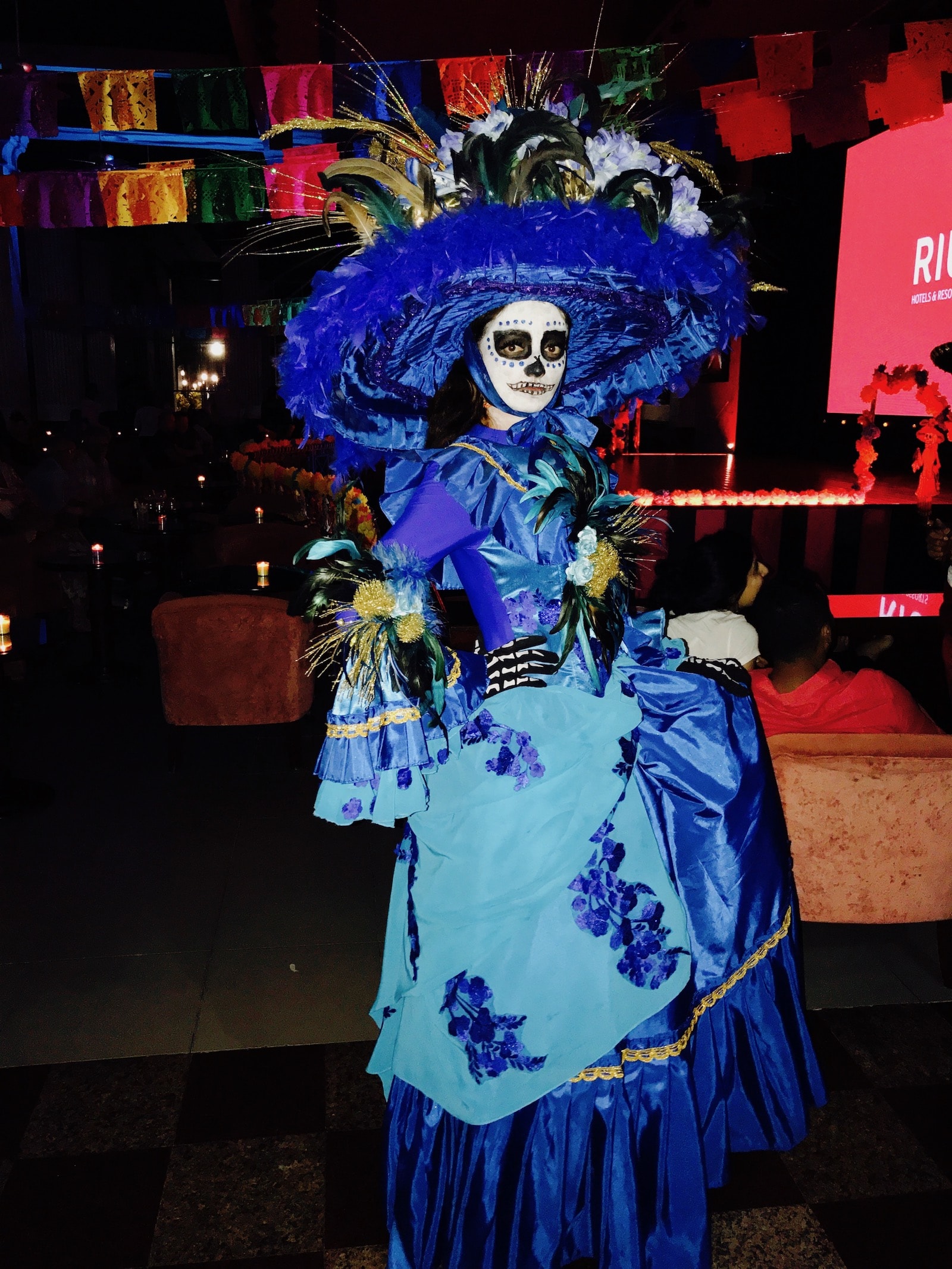 Día De Los Muertos – One of Mexico’s Most Spiritual Holidays

Day of the Dead is a Celebration preserved throughout Mexico, especially in the central and south. If you’re traveling during the end of October and early November, you will automatically be fully immersed into the festivities. The celebration is officially 3 days:

Although it’s officially 3 days, festivities easily go on for a week or month. Mexicans love to find a reason to party and celebrate life! Or in this case, celebrate the dead. I had heard of Día de los Muertos in passing through movies like Coco and experiencing/observing activities on Olvera Street in Los Angeles during Halloween. After watching Reza Aslan‘s show “Believer” on the episode of ‘Santa Muerte’, a Mexican Folk Religion that combines aspects of Catholicism and Aztec customs, I had an even deeper appreciation for this concept. Though related, those that celebrate Day of the Dead are not all Santa Muerte, as they are a small subset group with similar practices of worshipping the dead.

Celebrating Day of the Dead in Cancun

Cancun is known for it’s sexy white sand beaches, warm turquoise waters, ladies in hot bikinis and bomb-shell bodies all year round. It’s the spot to vacation with hundreds of resorts, residences and timeshares to stay at and endless bar/club options. But dive deeper during your travels in Cancun to discover the deep cultures and tradition behind the state of Quintana Roo where Cancun is in. If you go to towards the end of October and early November, there will be endless parties options to celebrate Day of the Dead in Cancun. It is one of the most important Mexican holidays of the year. Every hotel, restaurant, bar, home and even on the streets are offerings and decorations. 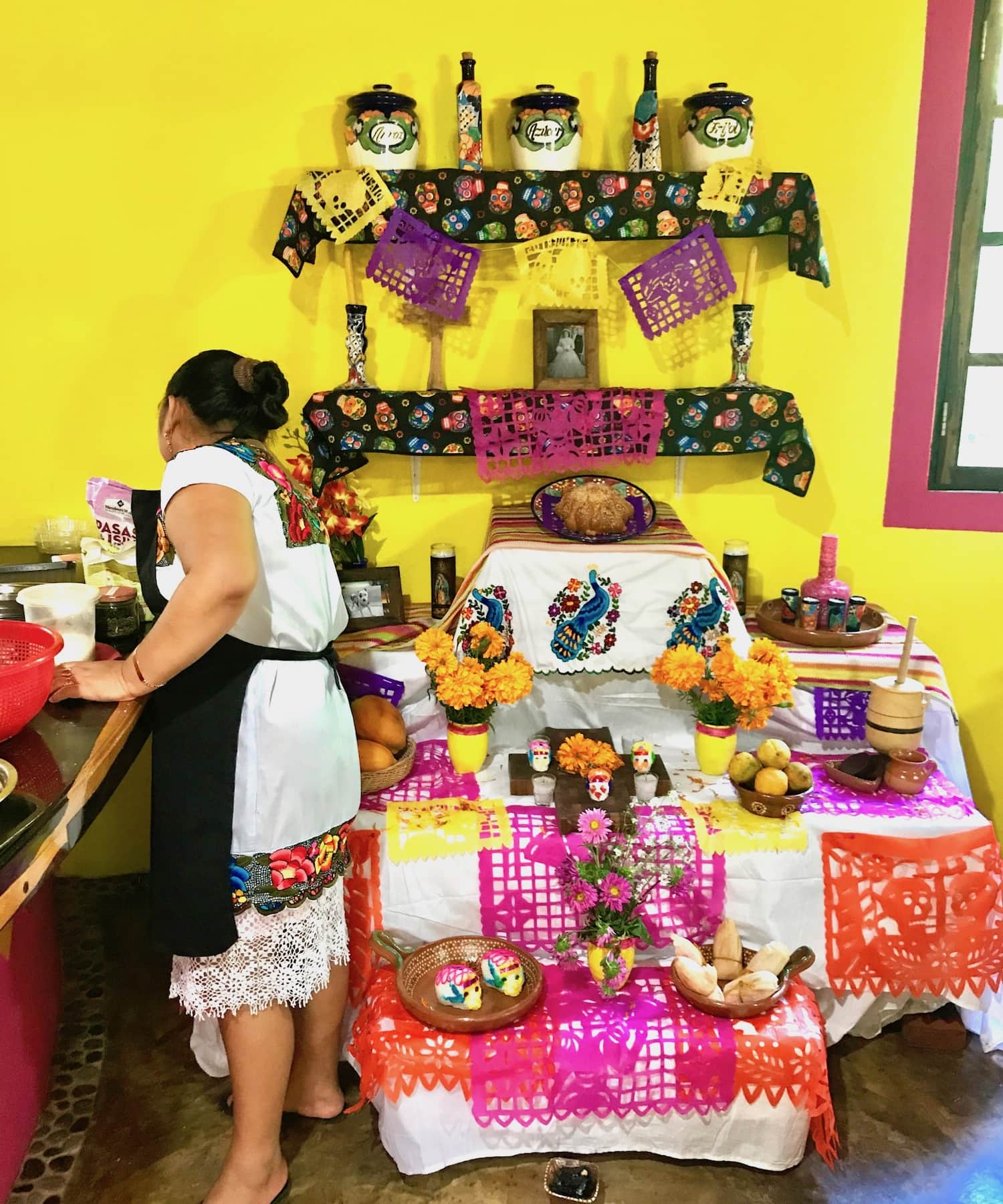 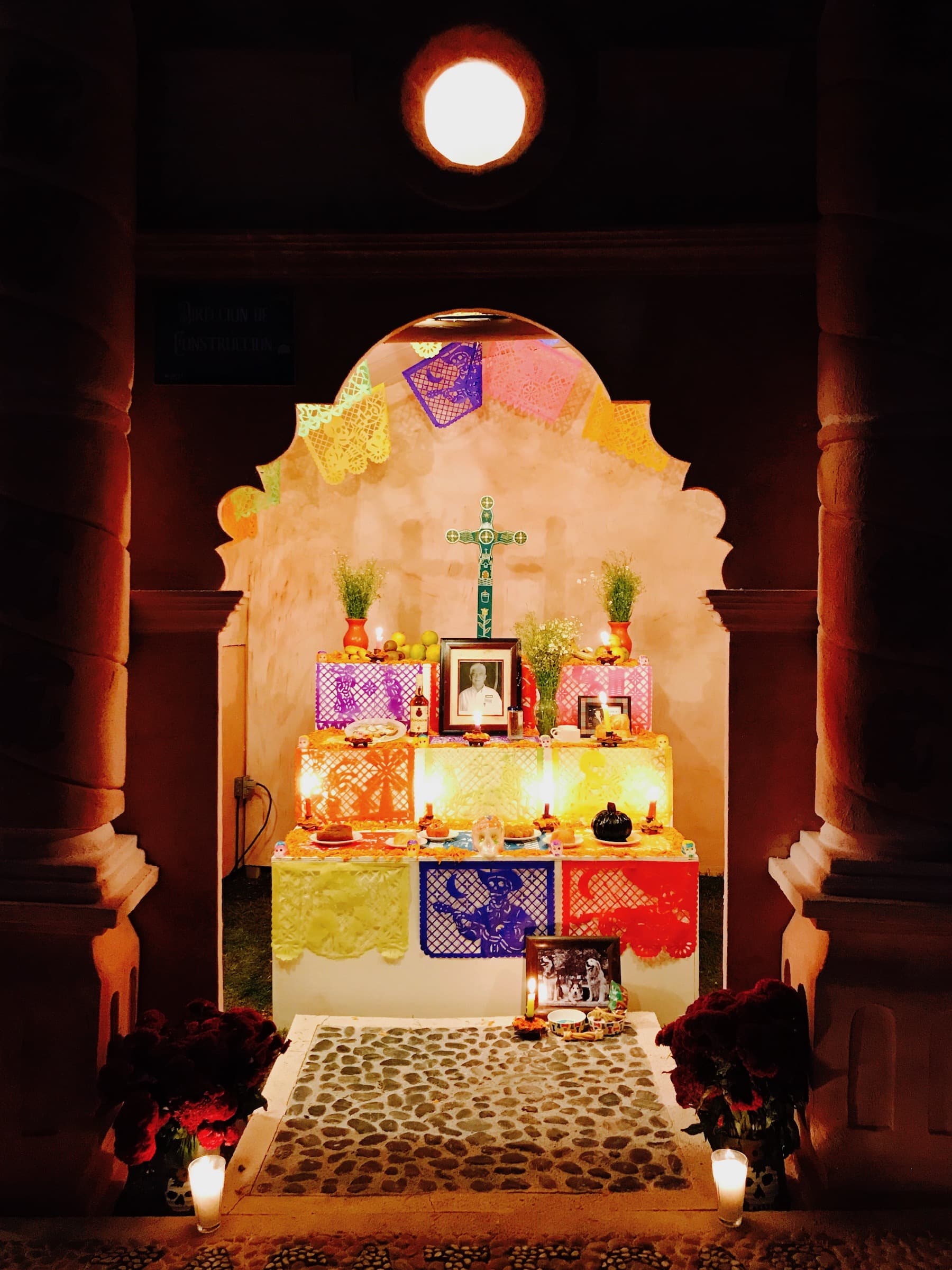 “Ofrendas” = Altars Dedicated to the Dead 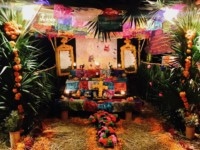 The most symbolic is the Altars or in Spanish, “Ofrendas” which typically has 7 levels. Altars will vary depending on region and family traditions. But every altar will display: Food, Marigolds, Drinks, Fruits and Sweets for the spirits to enjoy. Candles are lit to guide the spirit along with photo of the person who passed.

This is also a special time to visit their grave and garnish with flowers, fruits and food. 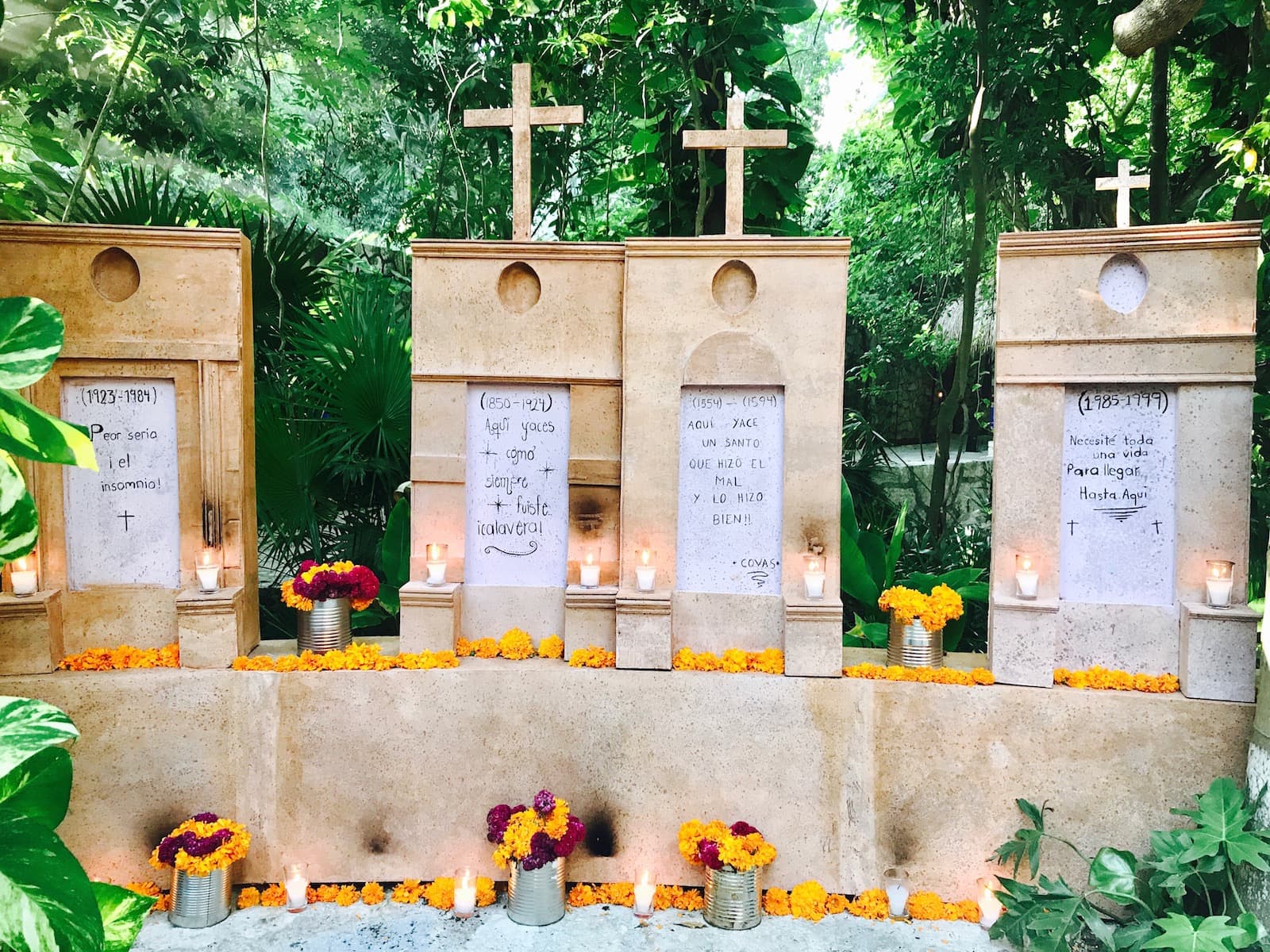 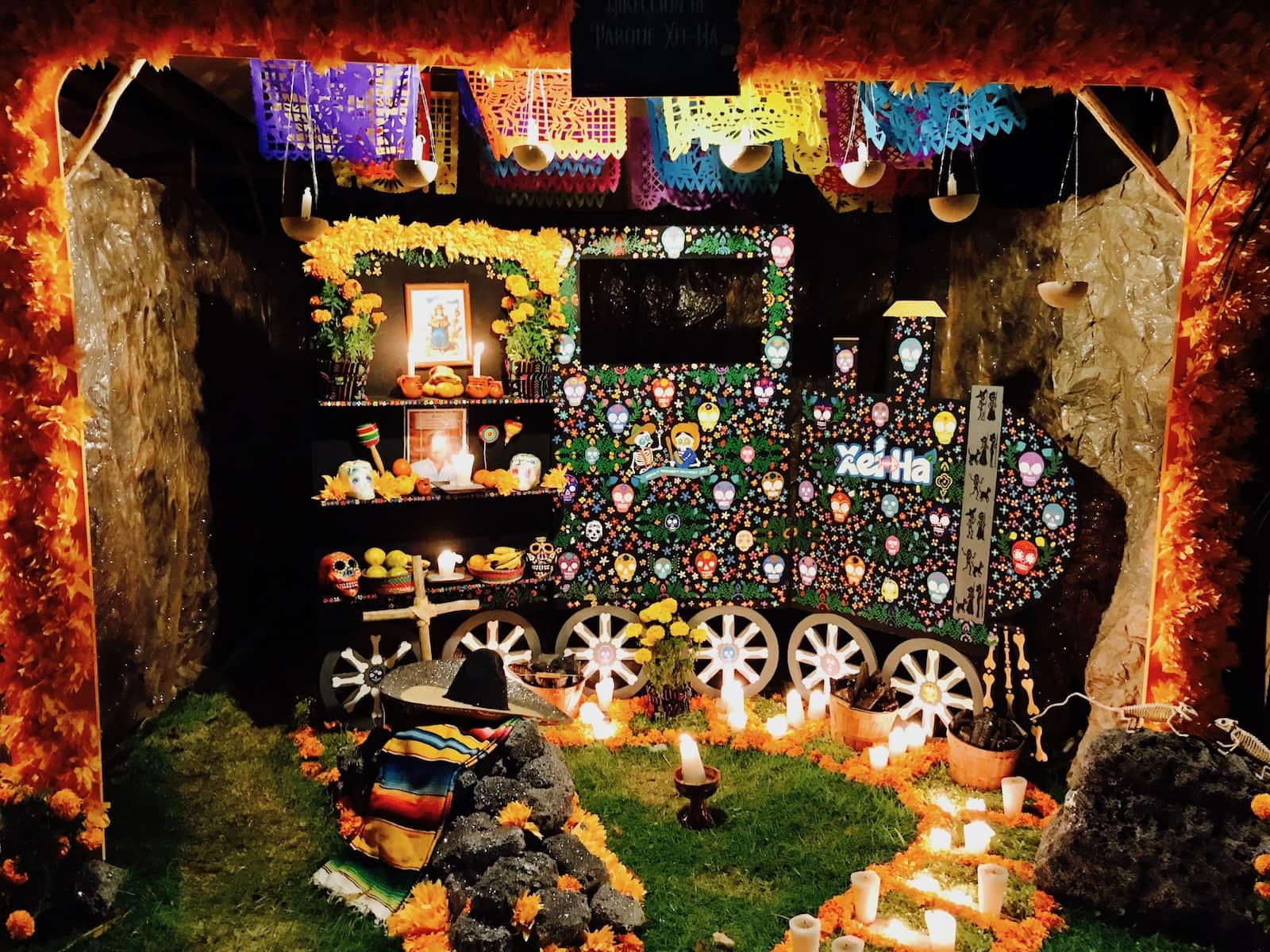 Not only is this a celebration of those that have passed, this is also a time to re-connect and bring the familia together. It’s a time for the returning journey of the souls. Most will say that they feel the spirits of around them especially strong at this time. All of a sudden, their memory and soul doesn’t seem so far away. As one friend told me, to not remember them is the real death. 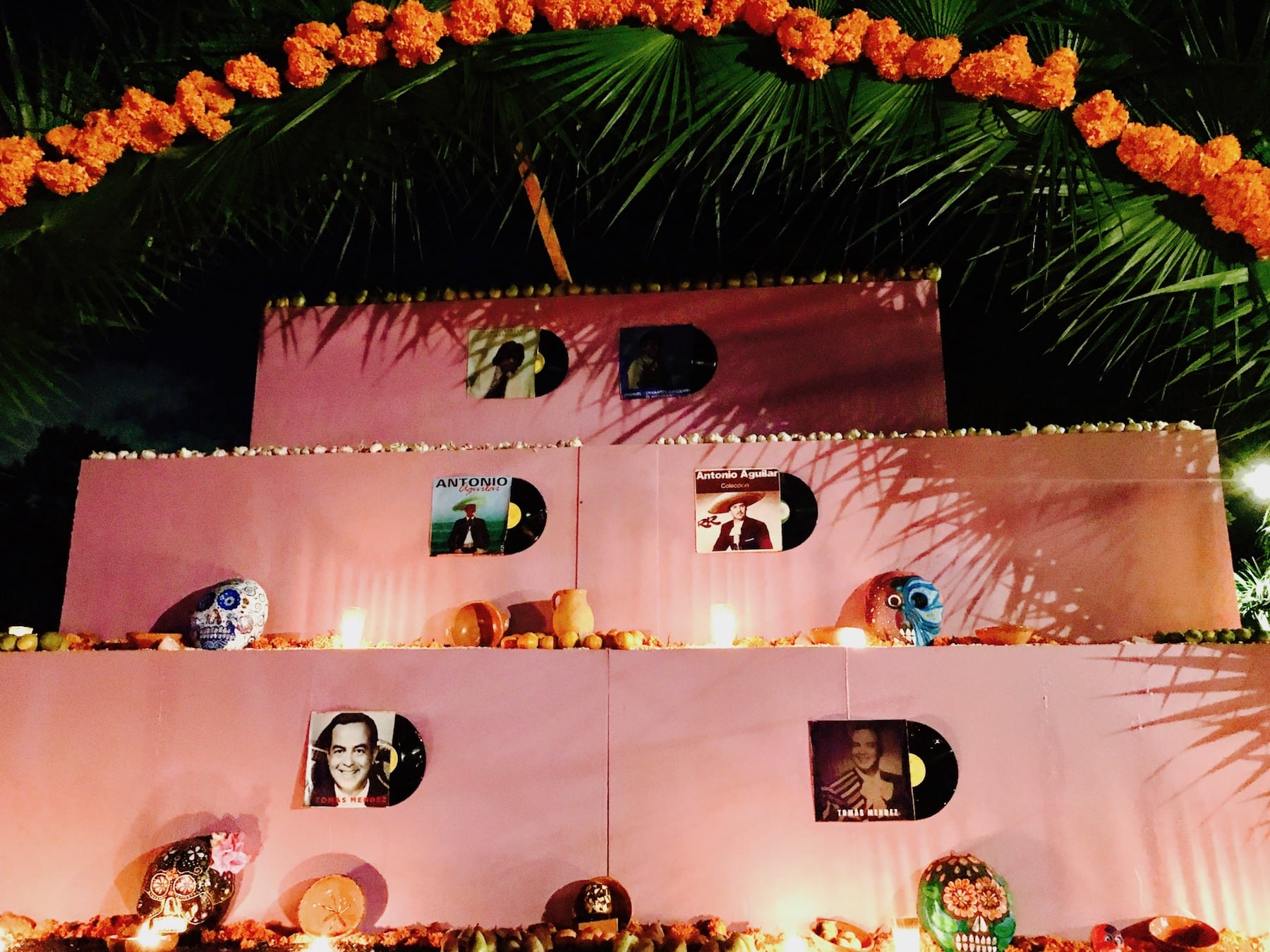 Pan de Muertos is a sweet flour bread sprinkled with powdered sugar and shaped as skulls that is commonly made. Sugared Candy Skull is also common as it represents death. Fruits and the favorite food of the deceased are offered on the Ofrendas for them to enjoy. Tamales are offered to God.

Where to Celebrate Day of the Dead in Cancun

There were 4 significant places in Cancun that we celebrated which I would highly recommend during your visit:

“Festival of Life and Death Traditions” at Xcaret Park 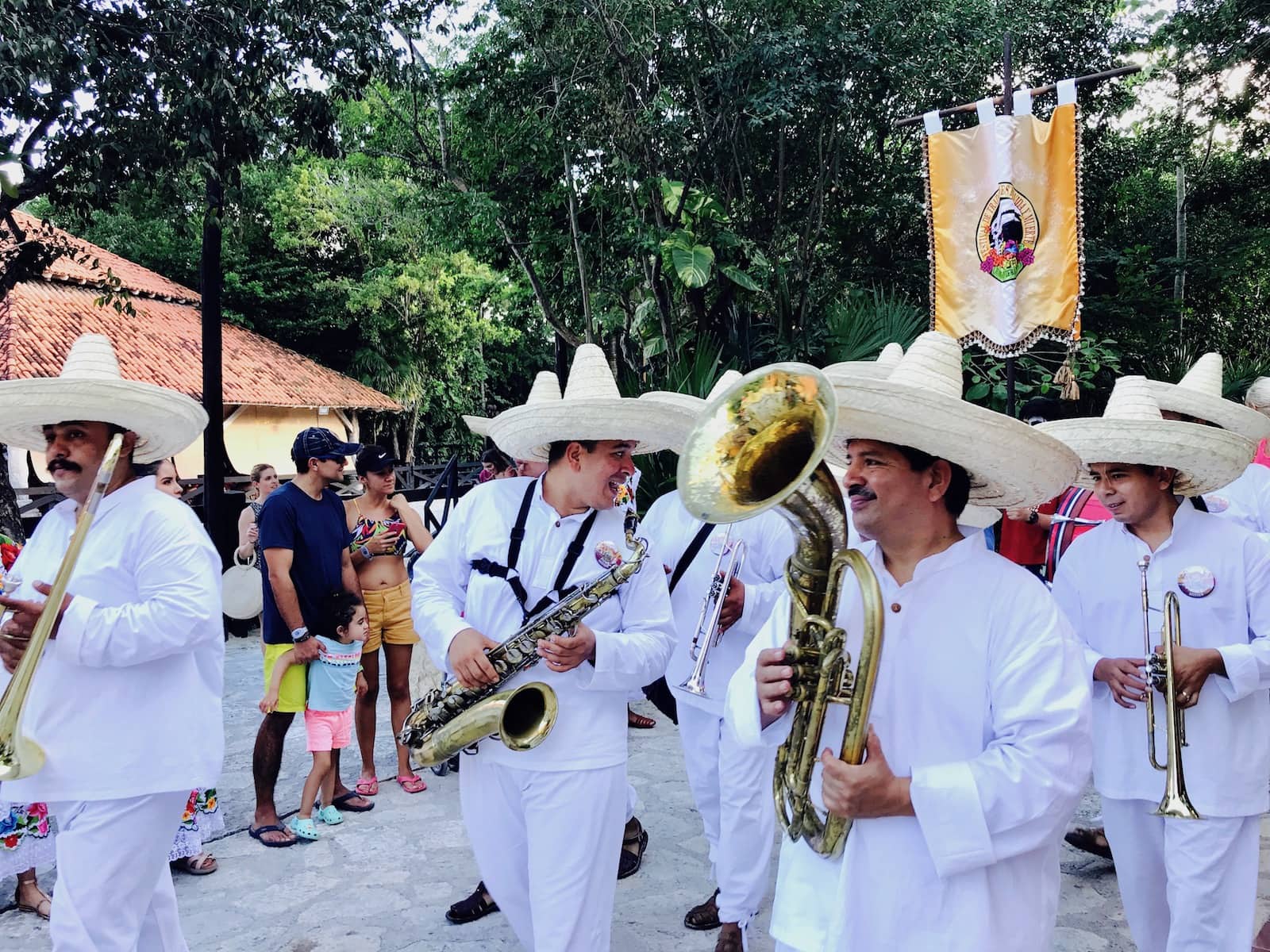 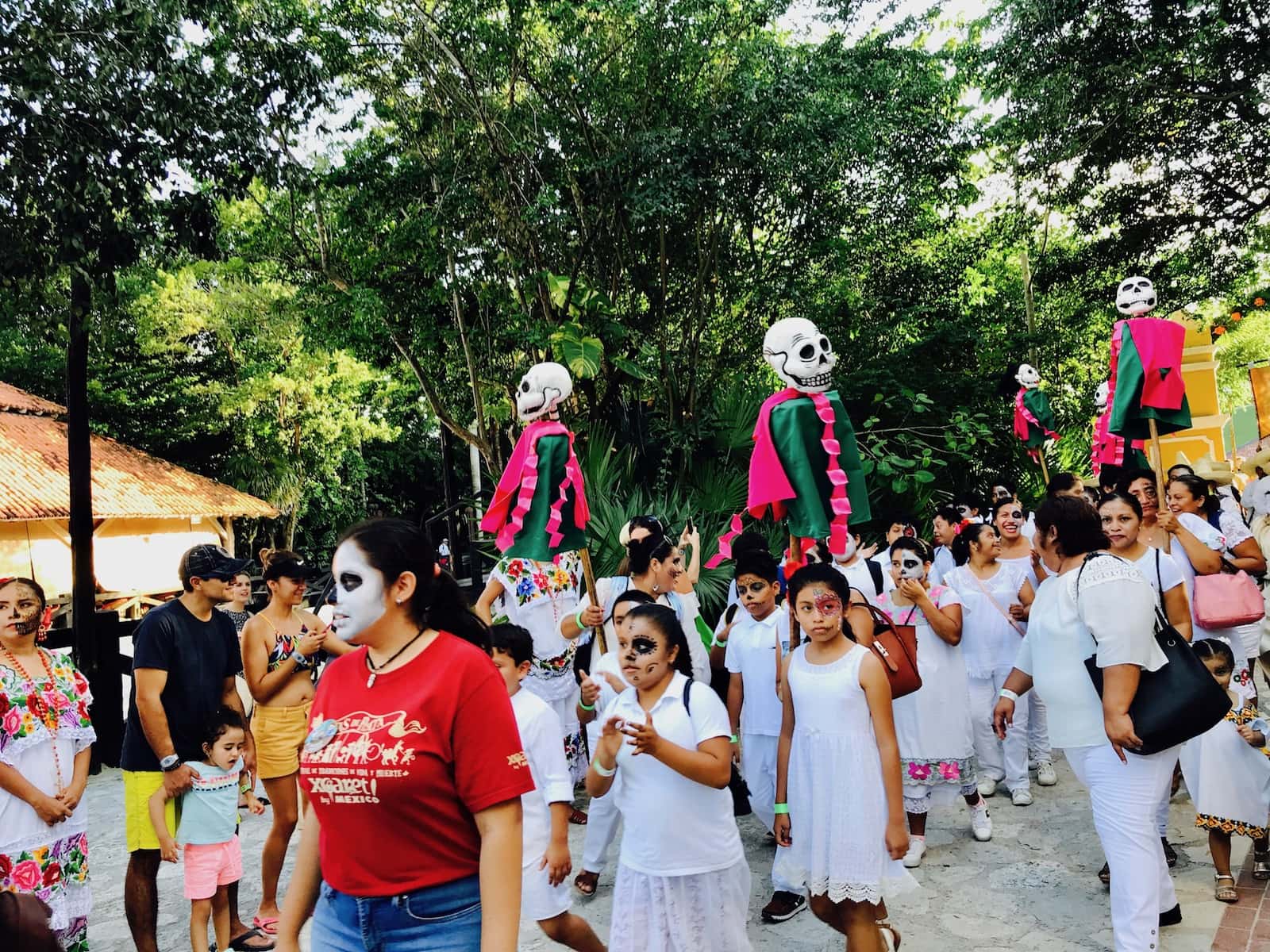 The best way to throw yourself immensely into the full observance of the Day of the Dead in Cancun is to spend a day at Xcaret Park. Xcaret is a massive nature park located in Playa del Carmen with underground rivers and more than 50 attractions. Day of the Dead is a great time to go with their event called the Festival of Life and Death Traditions. We attended the 13th edition! 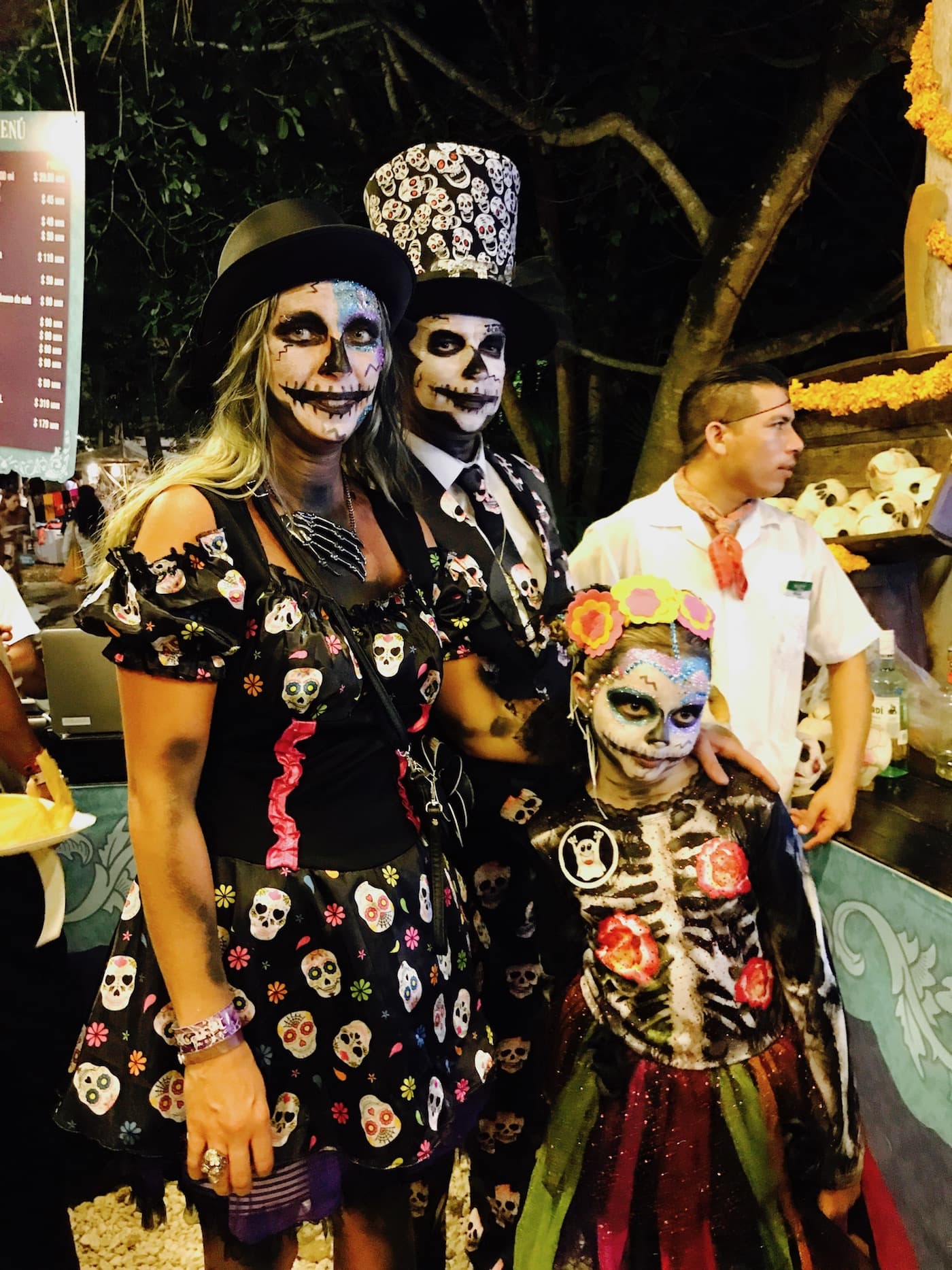 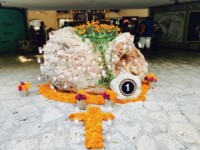 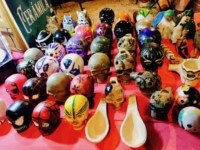 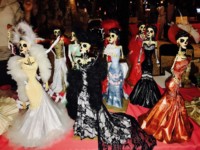 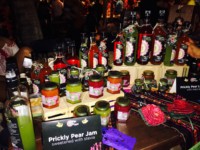 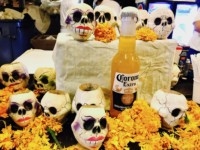 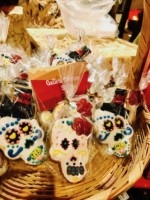 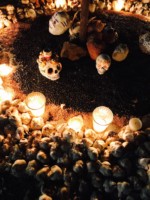 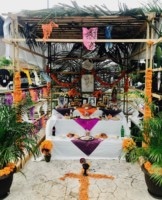 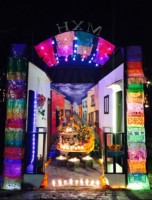 Theatre performances by Clowns, Puppets and Circus reignited the children in us along with performers from the Mexican state of Zacatecas, Yucatán and Quintana Roo. We spent all day at Xcaret watching folkloric ballet, pre-Columbian dances, traditional rituals and festive dances. During the evening, the Ofrendas were lit up by candles and the fragrance of incense. There were beautifully decorated mini chapels, skulls, grave setups, workshops, photography opportunities, handicrafts to buy, expositions, theater, dances and a Gala concert.

And of course, music. There is no shortage of music in any Mexican celebration, from eras throughout Mexican History. From the Mexican Revolution, to the songs by the Zacatecan, Yucatecan, Jaraberos, who are all ancestors of the world-renowned “Mariachi“.

My favorite part? There were ladies that roamed around the park pouring free Mezcal for all the guests! Be sure to keep the ceramic shot cup they give you so that you can get refills. 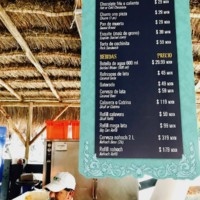 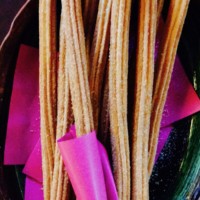 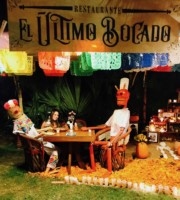 For information on Festival of Life and Death Traditions at Xcaret Park: https://www.festivaldevidaymuerte.com/en/festival-of-life-and-death-traditions 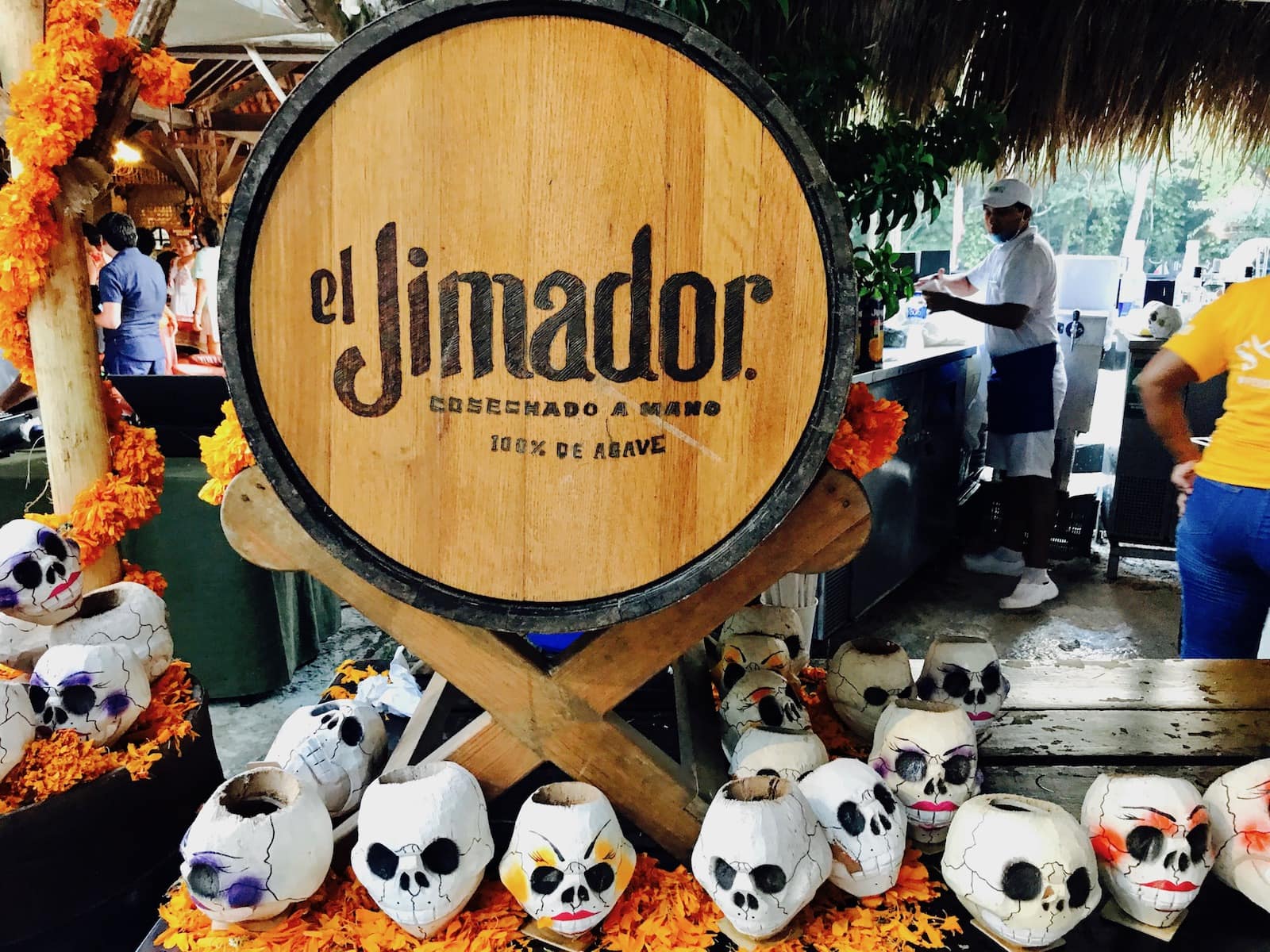 Xcaret is basically a huge amusement park, though much more exciting and spacious as if you’re in a fairytale land. The point of the park is to get a glimpse of all that Mexico has to offer within one visit. Especially of it’s expansive nature, forests, sea as well as the cultural customs, traditions, food, music and drinks. There are jungle trails of the Eco Archeological Park, Sea Turtles, Flamingos, Butterfly Gardens, Tropical Birds, Coral Reef Aquarium and introductions to plants of the Riviera Maya. Nature pools are available for some relaxation time as you feel the warm breeze of the Caribbean Sea. And of course, lots of food, beers and all the Tequila and Mezcal you can drink. 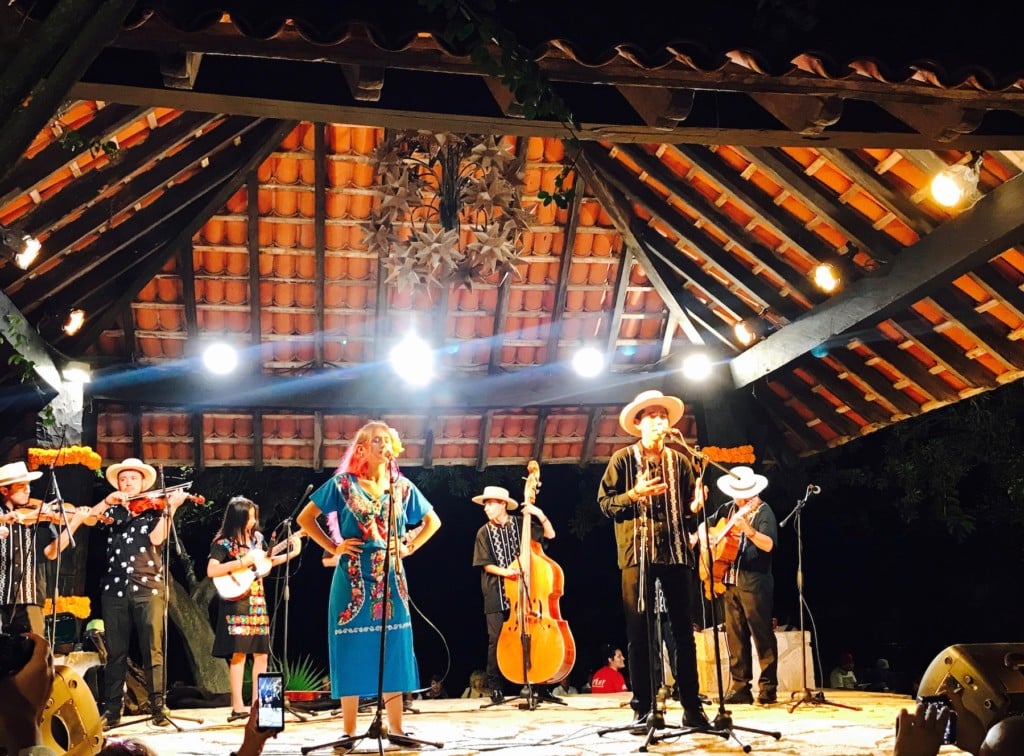 There are evening performances every night, with more than 300 artists on stage at the Xcaret México Espectacular. Experience the fascinating history of Mexico and the folklore of its states at the Gran Tlachco theater. Enjoy a colorful, cultural party, full of traditions. Tickets to the park cost about $90 for Adults and $45 for children. Spend a day at Xcaret to get a glimpse of all the Mexican regions has to offer through the natural and cultural wealth of the country.

Best Place to Stay in Cancun

Hotel Riu Palace Resort is an All-Inclusive Resort in Playacar (in Playa del Carmen) which is a gorgeous 5 star hotel. All you can eat and drink options in various tasty restaurants. White sand, swaying palm trees and Caribbean breeze awaits you. Friendly waiters serve you from your room all the way to the private beach. The interior and exterior design of the hotel is soothing on the eyes with a white base and pops of purple and magenta. Service is spectacular with 2 main pools and swim-up bars. Rooms include your own mini-bar, all included in the package. 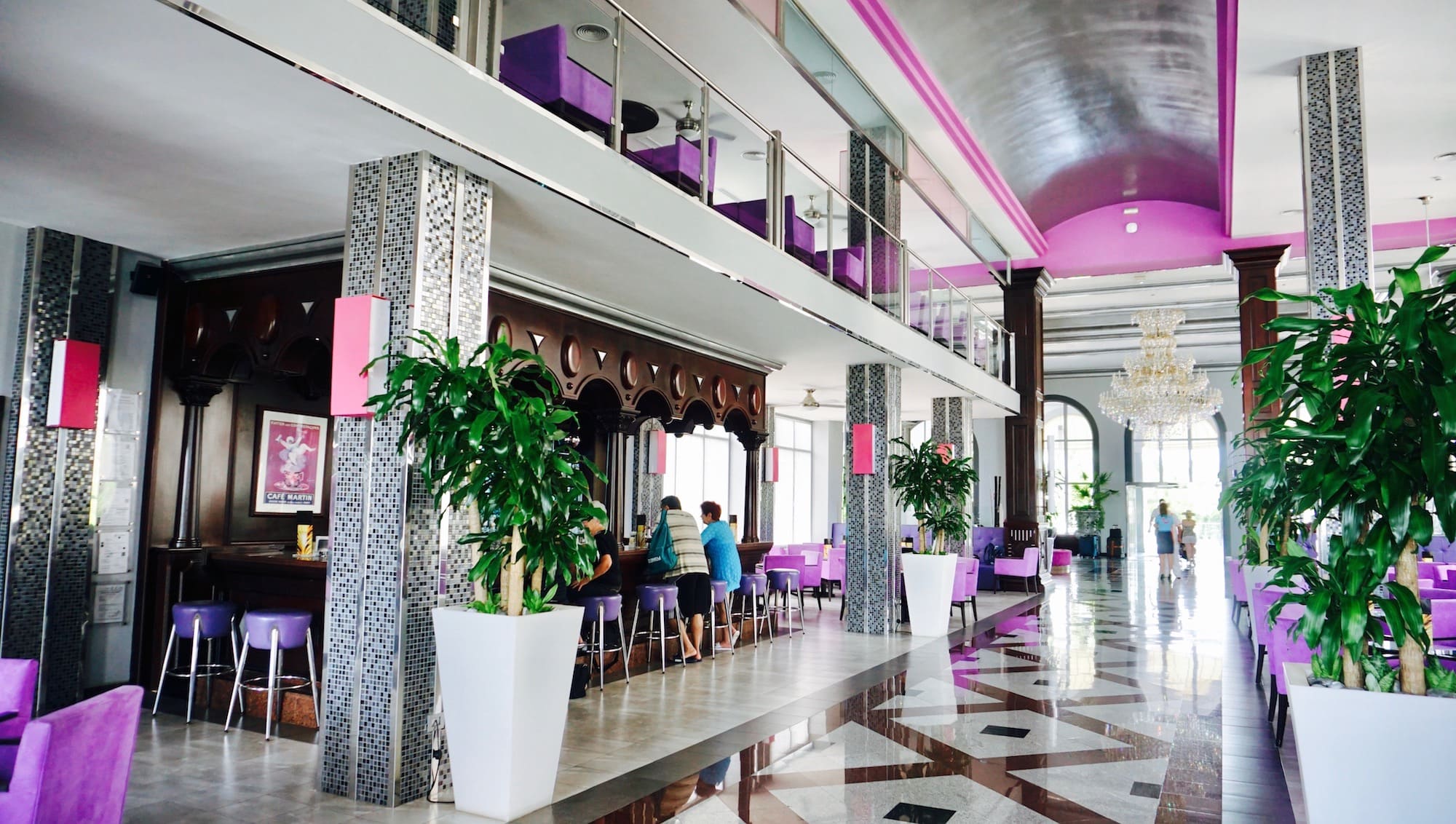 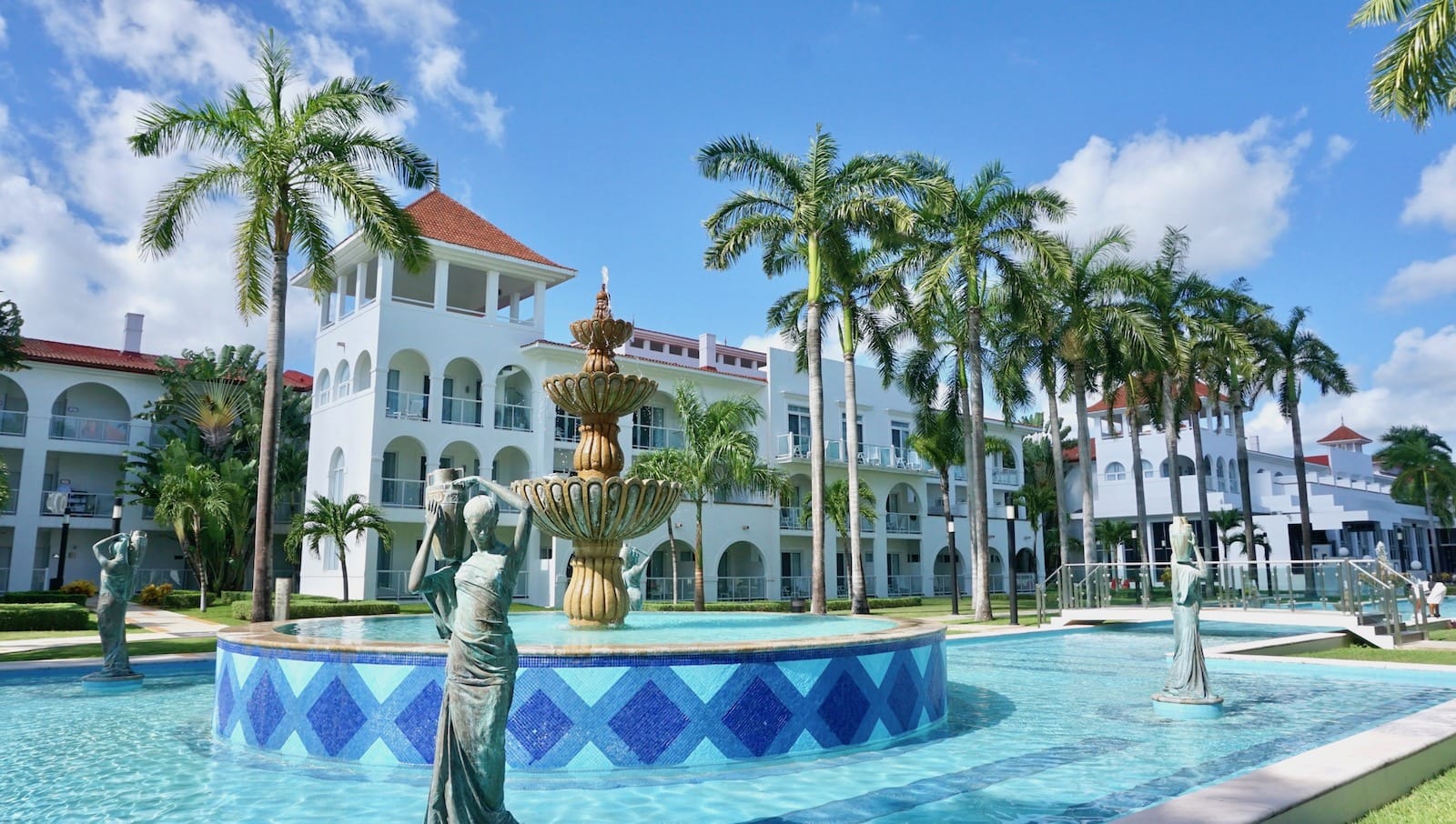 Flights: There are direct flights on Delta and various airlines from LAX (and other major cities in the US) to CANCUN that takes only 4.5 hours.

I have always had a deep confusion regarding death. Many people do. Though for those that are religious, the meaning and reasons behind death are laid out more explicitly. Because I do not follow any organized religion, it’s been a tough concept for me to grasp. One day we are born, we live X number of years and one day we die. What happens to those that die? Sure, they live on in our memories, and then what? How do we cope, how do we go on?

In learning more about the Mexican Tradition of Day of the Dead, it has given me a different perspective on dealing with the deceased. The Western customs tend to sweep the conversations of ‘death’ and the ‘deceased’ under the rug with graveyards as a separate place to be located farther away from our daily view. The concept of ‘ghosts’, ‘spirits’ and ‘souls’ seem to be taboo to many (because they aren’t ‘scientifically proven’ or are ‘spooky’). Though growing up in an Asian family, we have always honored our ancestors. Especially on holidays such as Chinese New Year. We light incense to pay and bow to our ancestors while giving up food offerings and money.

Honoring our Ancestors: An Asian and Mexican Tradition

Though the concept of death has always confused me, honoring our ancestors is not so foreign. The Asians, Aztecs, Mayans, Mexicans and so many other cultures today still carry on this tradition. Experiencing Day of the Dead in 2018 was especially relevant, special and nostalgic for me. The first close loved one in my family had passed away earlier that year: my paternal grandfather at the age of 98.

As I spent my days in Cancun connecting and celebrating those that had passed, my grandmother (his wife) would also be breathing her last few breaths on earth. I reflected on his death as well as what I anticipated on the soon passing of my beloved grandmother (1 month later in December). She basically raised me and was the person who I spent the most time with in my childhood. I had been dreading the day of her death since I was a child but knew the news would realistically soon come. While talking to people in Mexico we met about Day of the Dead, I began settling in my mind and emotions about death a bit better. I reminded myself that death doesn’t need to be such a tragic event. That even after their passing, that we can still connect with them, now and eternally.

As we learned about the offerings that were placed on the altar for the dead, it put a smile on my face to relive all the favorite food and meals spent with my grandparents. 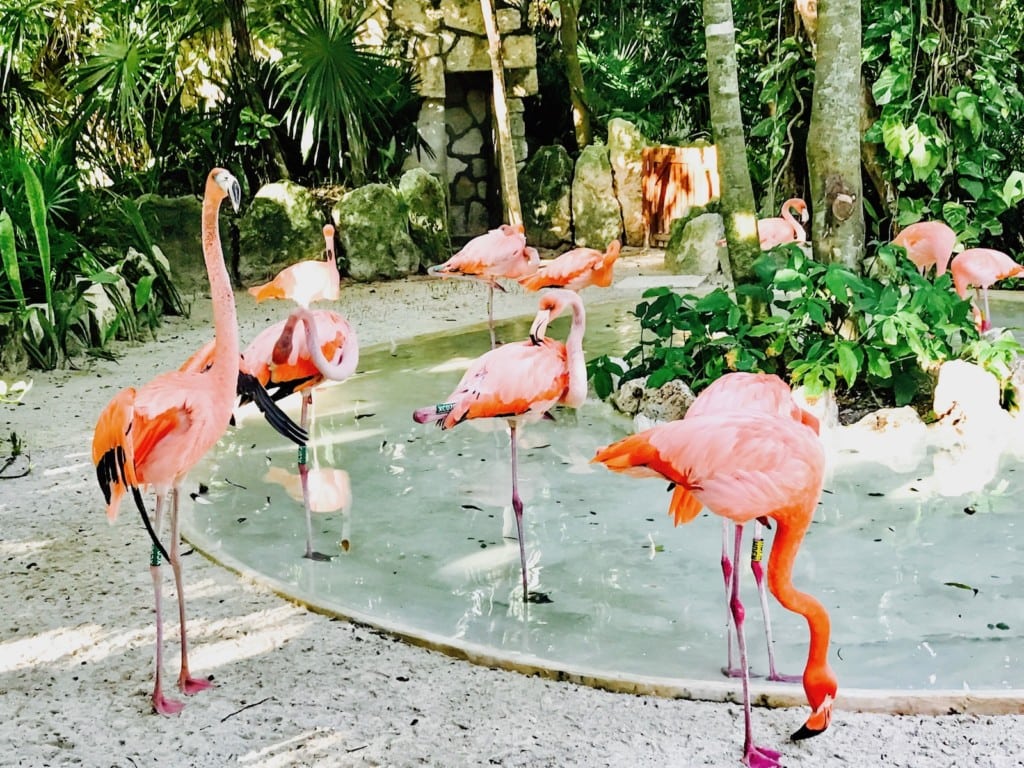