I’ve spent 3 nights here and could easily stay longer. Its a lot more modern and catered to tourists but still a peaceful hidden city. I hear Kovalam is over-saturated with tourists and expensive hotels. This hotel here is costing me about 14$ a night. I’m about to check out and board the train to Trivandrum, the most southern tip of India, I plan to stay one night at a non-profit school.

I’d say about 1/3 the people here are from Tibet, many who came the past few decades, some on exile, others for a better life. The people here have been absolutely the friendliest bunch I have met – the travelers as well as the natives. There is not one person you miss saying good morning, good afternoon, hello too, and they remember you.

I walked out to do some shopping as I haven’t don’t much yet. The dozen or so quaint shops are lined along the top of the beach cliff, among the small restaurants. As I stopped at my first shop, the power went out.. QUITE SCARY! (although a very common occurrence throughout India) I ran out to the next restaurant over filled with candle light for some security. I have been use to eating alone, as it is quite peaceful.

As I began to order my drink, I noticed a friendly bunch of expats sitting next to me. And an older hippie gentlemen caught my eye and invited me over to their table. I accepted the offer, of course the more the merrier, the more to learn about their experience in India and their story. This man was in his 50s from Southern Switzerland and it was obvious he was a stud back in his days. He reminded me tremendously of the Scuba instructor in Along Came Polly. He has been staying in Varkala for about 3-4 months, doing yoga daily and relaxing. He is a business owner, which seem to be the consensus for long term travelers.

I have therefore concluded that that is the way to go as a future goal of mine. Really the only way one will ever have that amount of flexibility in time and money to travel. The other gentleman sitting at the table was in his 60s or 70s from Athens, Greece. Also here for a few months just relaxing and retired. Soon, a lady from Greece joined, another from Switzerland and then a couple, a white guy who had been traveling for 7 years out of his native country and now all of their yoga instructor on the beach and his Japanese girlfriend (who left Japan 9 months ago and don’t intend on going back).

I felt like I had met the Varkala utopian inner circle. All seated before me. A collection of laid-back Global Travelers in Varkala with the common love of Yoga and Freedom that brought them all here.  I loved it and took all the Energy in. 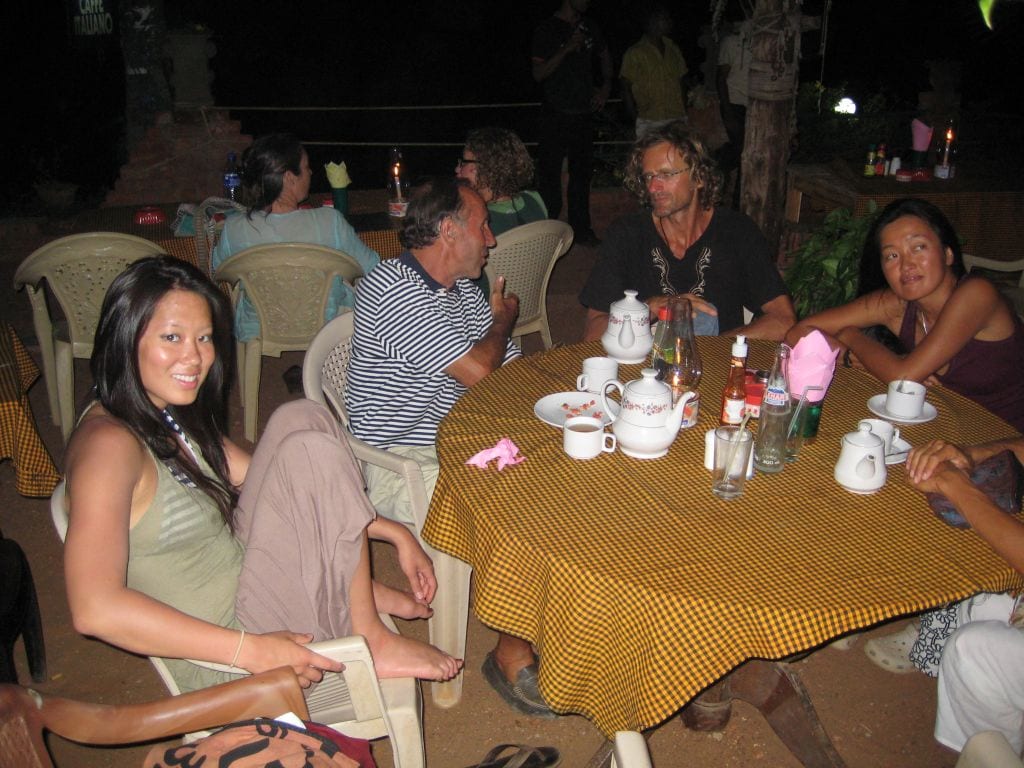 The restaurant was Cafe Italiano. Anything Indian here is completely bland but I’m taking a rest from Indian food as it can become very heavy. I ordered a bruschetta pesto and a Greek salad. During our meal, we all learned about each other. The old man from Greece, very fatherly, stated when I go to Greece, that I could stay at their guesthouse for free. It was a genuine offer, and I’d love to take him up on his offer one day. He spoke fondly about his 26 year old son who had a boat and his business was sailing who would take me on his boat when I arrived in Greece some day. Also, shared with me his daughter who is my age teaching horseback riding in New Zealand. I could sense the love, caringness and the proud father talk when he spoke of his children.. I will surely call him and his family when we visit Greece.

After dinner, I thought I’d be in the mood to get some drinks but was tired again. I went for a short scroll, said hello to the locals and became very curious about the Tibetans here. I ignited a conversation with a store owner sitting outside of his store and like all other warm locals, he invited me to sit down and told me he came to India just when he was born, fled from Tibet. I asked if he liked it here. He shrugged and said “Its just the way it is..”. A pretty common mentality of acceptance in India.

I bought a book on my way back since I finished “China Dolls”. A major chick flick filled with hysterical Chinese stereotypes of a young female in a Traditional family. I also picked up “Yoga Hotel” for $5 at a used Book Store, a trading post for Backpackers/Travelers who come by. The book contains short stories based in India written by an English girl who’s parents took her to India for business at an early age. I am 50 pages in and it’s OKAY but allows passing time and some more insight into the culture.

Now I’m off now to my first train ride, and rickshaw ride alone to the Southern Tip of Kerala and India!