Lebanon is home to many natural wonders, religious monuments, and the world’s most beautiful historical sites. Escape the busy streets of Beirut and take a day trip to three of Lebanon’s proudest sites: Jeita Grotto, Harissa, and Byblos. This popular three-way route is popular for many travelers which can easily be done (at leisure) within a day. Start your morning at the magical mountain caves of Jeita Grotto. Grab lunch in Jounieh and then take a cable car to Our Lady in the Sky (in Harissa) where you get a romantic view of the Meditteranean Sea. Get to the historic small town of Byblos by sunset for some fresh seafood at family-owned restaurants and bars. What makes this combination perfect is that they are all within 30 minutes driving distance of one another.

I’ll share everything you need to know about spending a day touring Jeita Grotto – Harissa – Byblos. I have also listed some of the most popular restaurants and hotels in Byblos as I recommend spending the night so you can explore more the second day! As for transportation, hire an English-speaking driver/car (for no more than $100) for the day from your starting point of Beirut (just 40 minutes south of these sites). Or rent your own car to get around as there aren’t always taxis or ubers available out of Jeita Grotto. In Harissa and Byblos, you will be able to find taxis but not necessarily ubers. 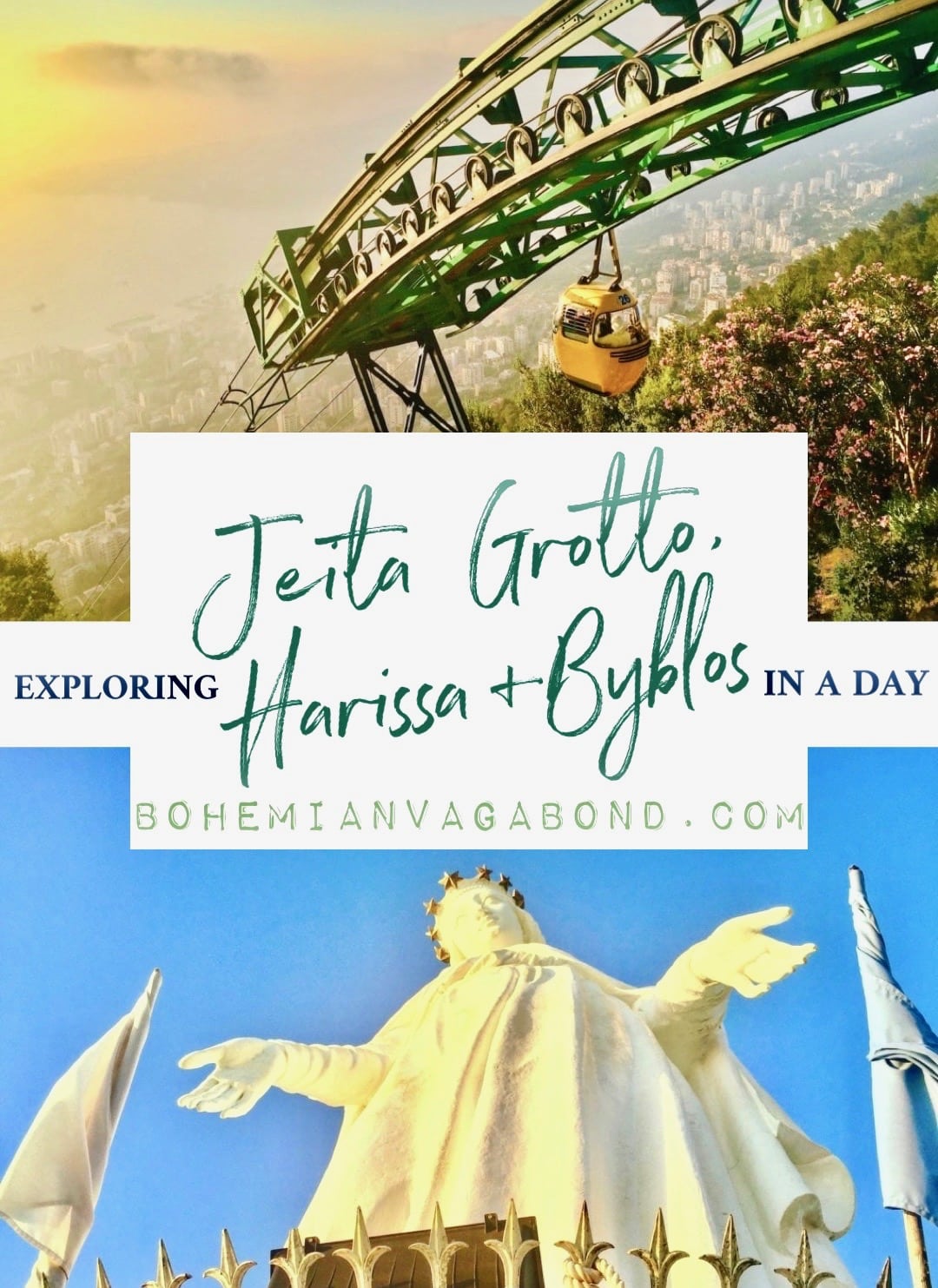 Begin your day as early as 9 am when Jeita Grotto opens to visitors. The majestic Jeita Grotto is a system of two karstic limestones crystallized grottoes located in the valley of Nahr El-Kalb, approximately 18 kilometers north of Beirut. Jeita Grotto is the longest explored cave in Lebanon and the longest complex cave in the Middle East. The road leading to Jeita itself is a stunning mountainous drive surrounded by greenery. This is hands down the most stunning cave I’ve ever seen in my life.

Jeita Grotto was discovered by an American missionary named Reverend William Thomson in 1836. After venturing about 50 meters into the cave, he fired a shot from his gun and heard loud echoes from inside the cave. Thomson then realized that this cavern is of great importance after exploring further. Expeditions led other explorers to discover deeper parts of the cave, reaching the length of approximately 9 kilometers. The lower caverns were first opened in the 1950s and instantly became one of Lebanon’s major tourist attractions.

When touring the upper and lower Grotto, one will get an in-depth glimpse into all elements of nature from the stone, water, flowers, trees, airs to the animals – all with a touch of Lebanese heritage.

What To Expect at Jeita Grotto 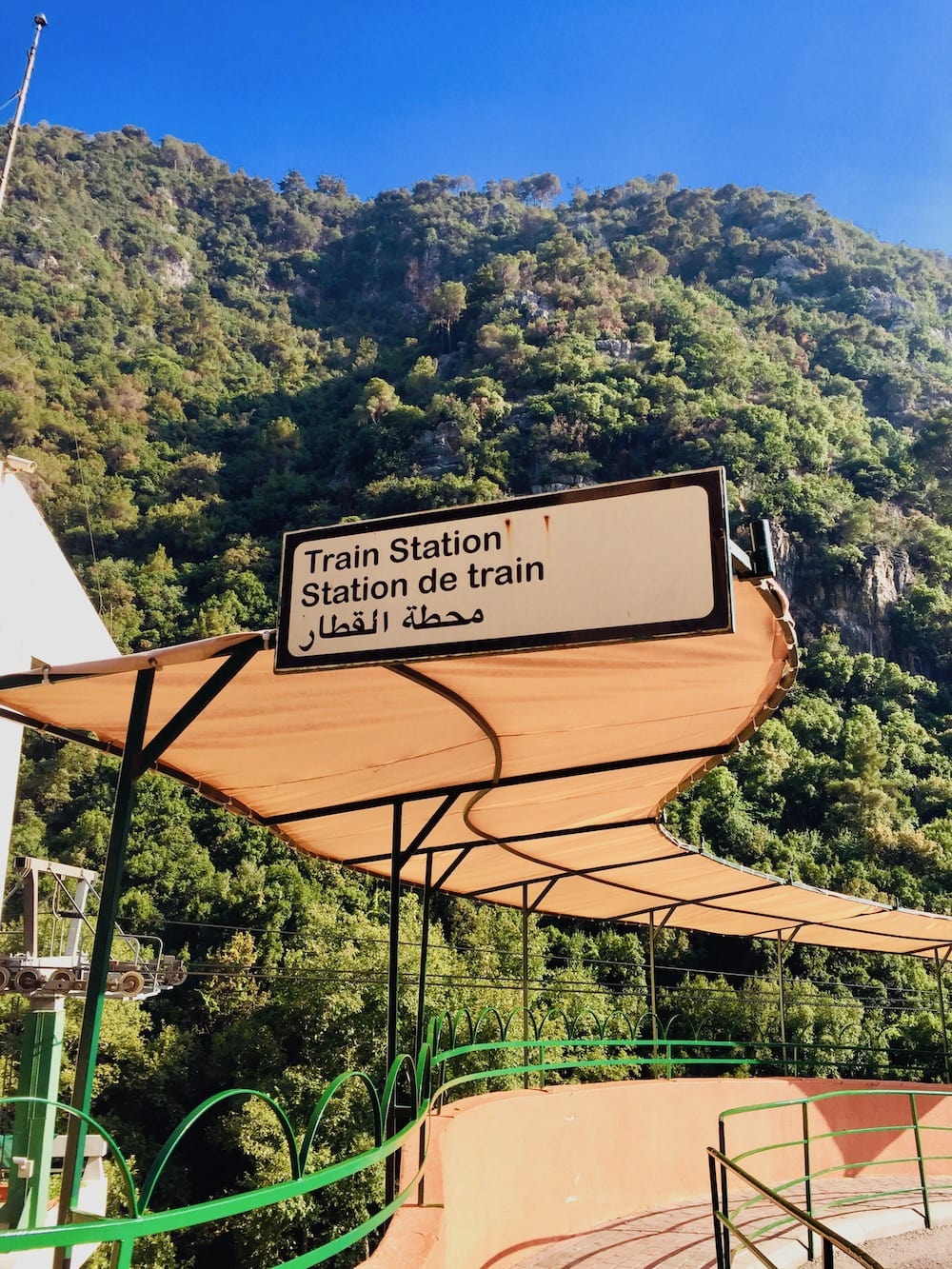 The upper grotto is accessible via cable car ride from the ticketing office. This cave has about 700 meters of accessible walk-way and has three chambers. The White Chamber contains the most impressive formations in all of the upper grotto with a length of 8.2 meters. This part of the cave is known for having the longest stalactite in the world. The Red Chamber has a height of 106 meters while the third chamber towers at 120 meters and is considered to be the highest of the three chambers. The walk in the upper grotto will take you into a world of stunning limestone formations.

The lower cave is accessible via a train ride from the ticketing office and the upper cave. It’s located 60 meters below the upper grotto. Exploring the lower grotto can only be done through a peaceful, idyllic boat ride. This unique experience will show you one of the world’s most amazing stalagmite formations. Keep in mind that they sometimes close the lower grotto during the winter months (December-March) due to the higher level of water.

Picture-taking is prohibited inside the caves. The staff will strongly advise you to leave your camera in one of the lockers provided at the cavern entrance. It is unlikely that they will check, so I recommend sneaking in your phone/camera so you can secretly take some stunning videos.

At the end of your cave journey, there is a souvenir shop, a small zoo, a Phoenician Garden with sculptures and a family restaurant. I’d recommend a comfortable 1.5-2 hour exploration by foot so wear comfortable shoes! 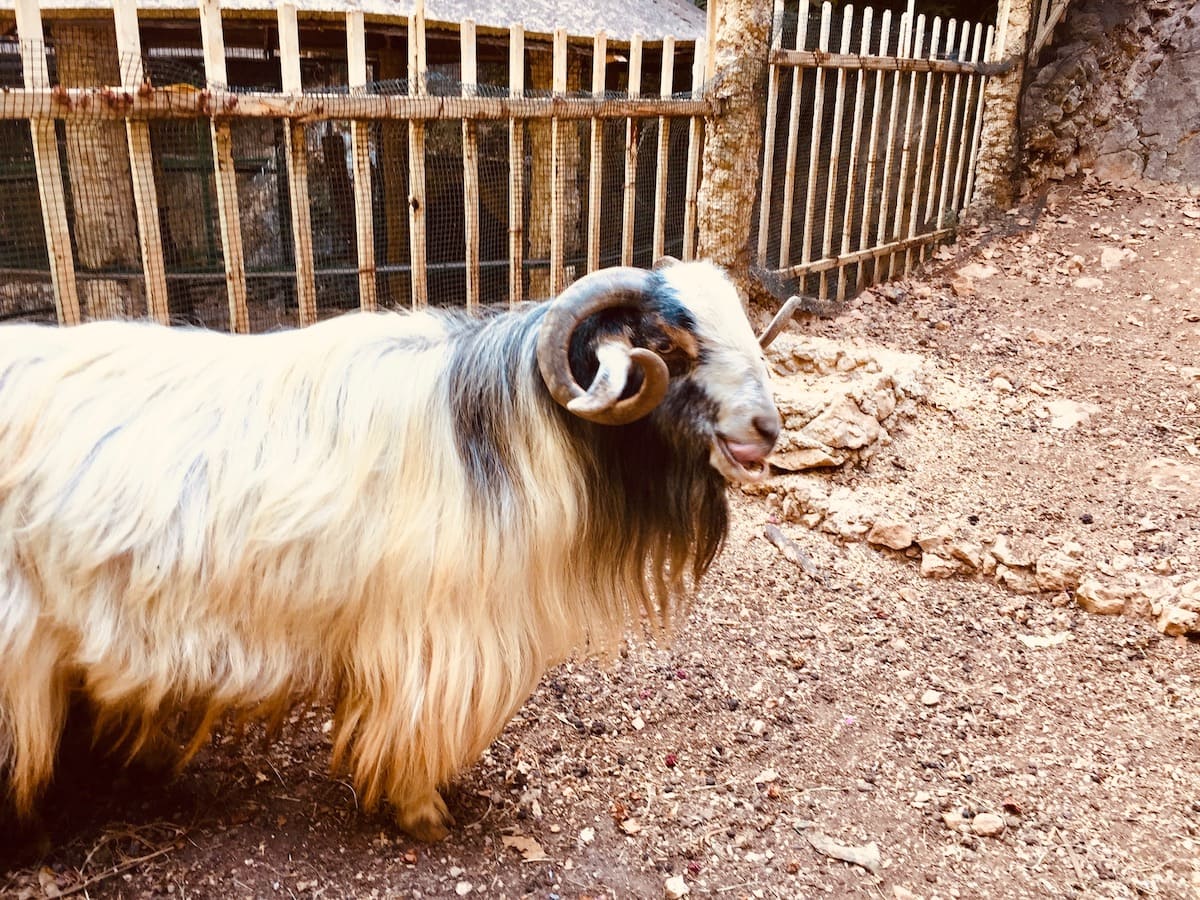 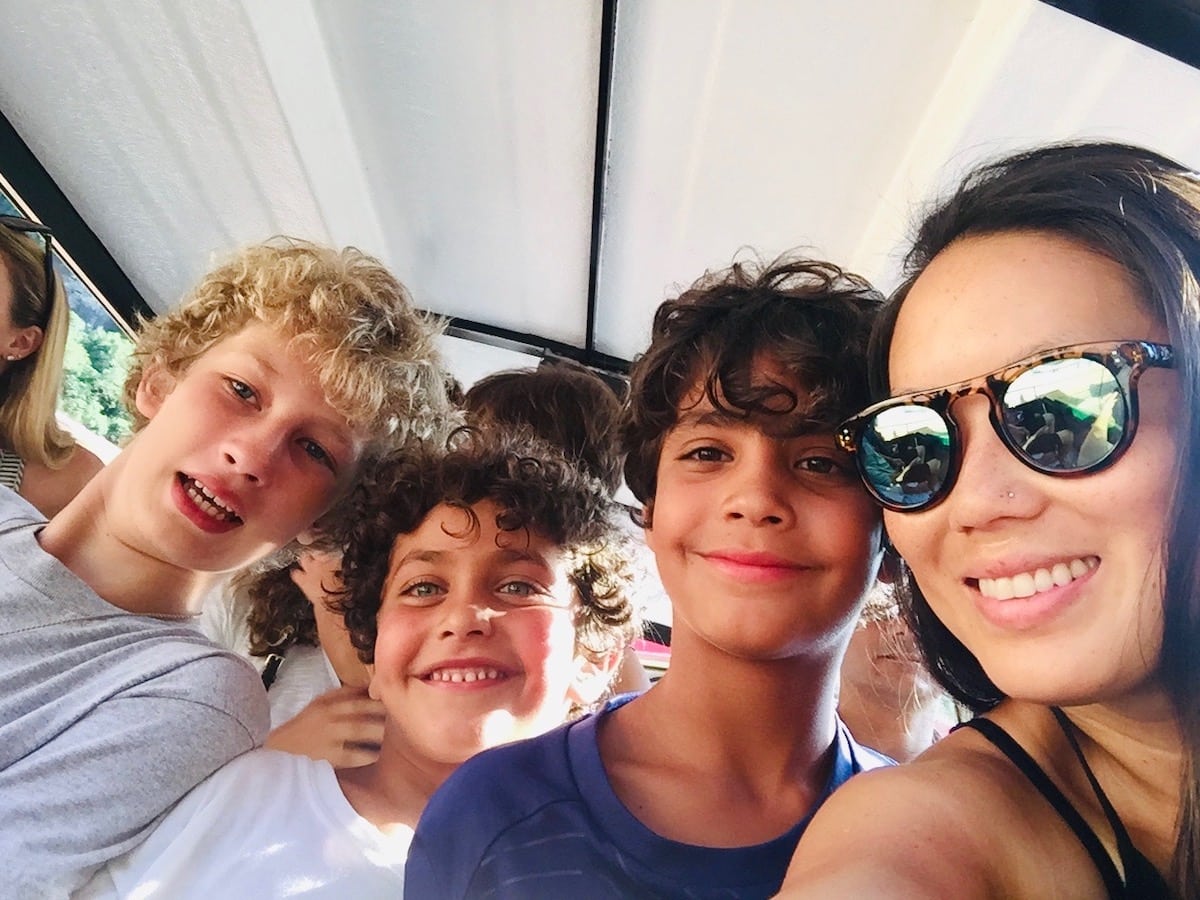 Bottom left photo where I’m posed is the “Guardian of Time“.
One of Lebanon’s most prized statues, situated at the entrance of the lower grotto. 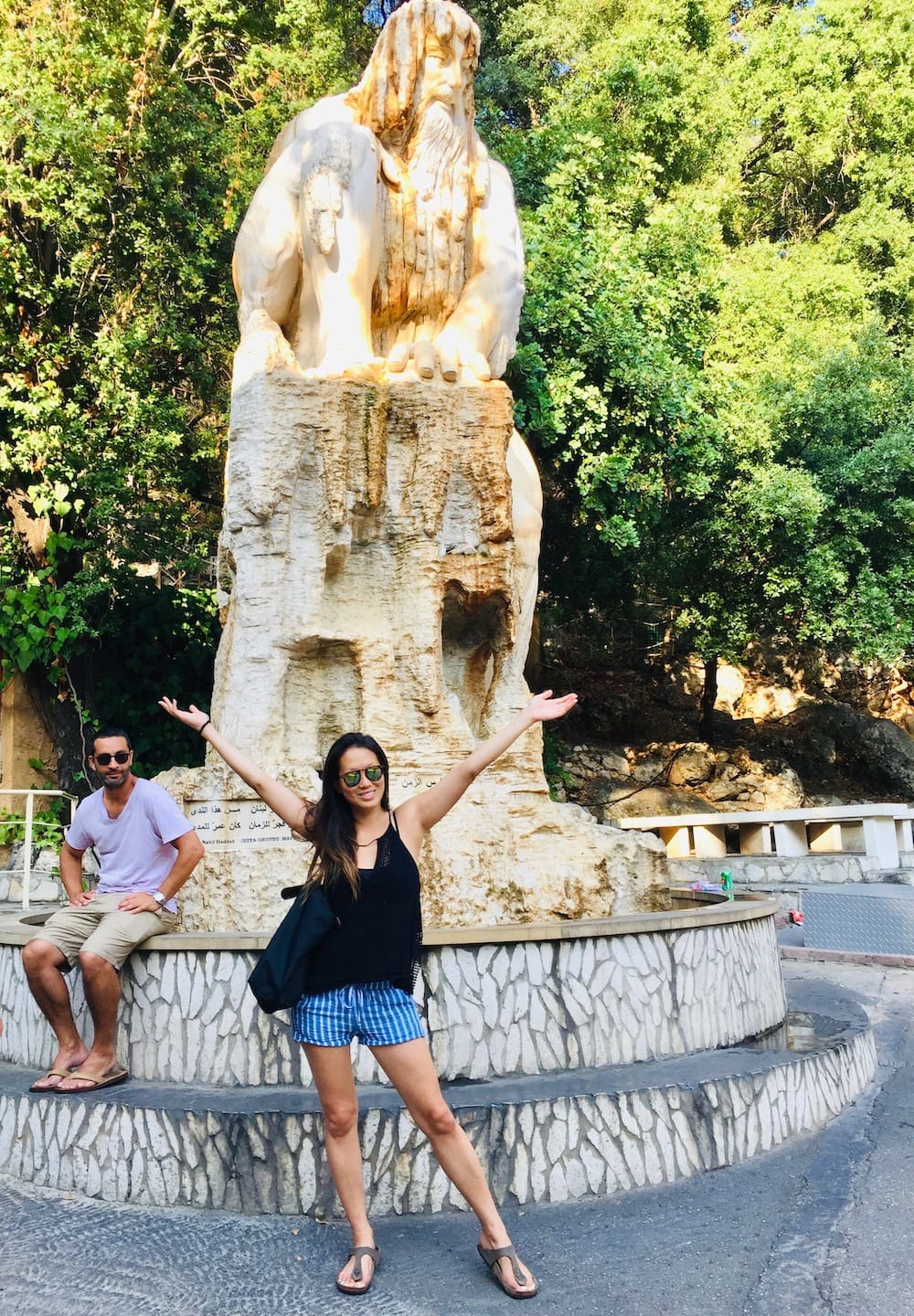 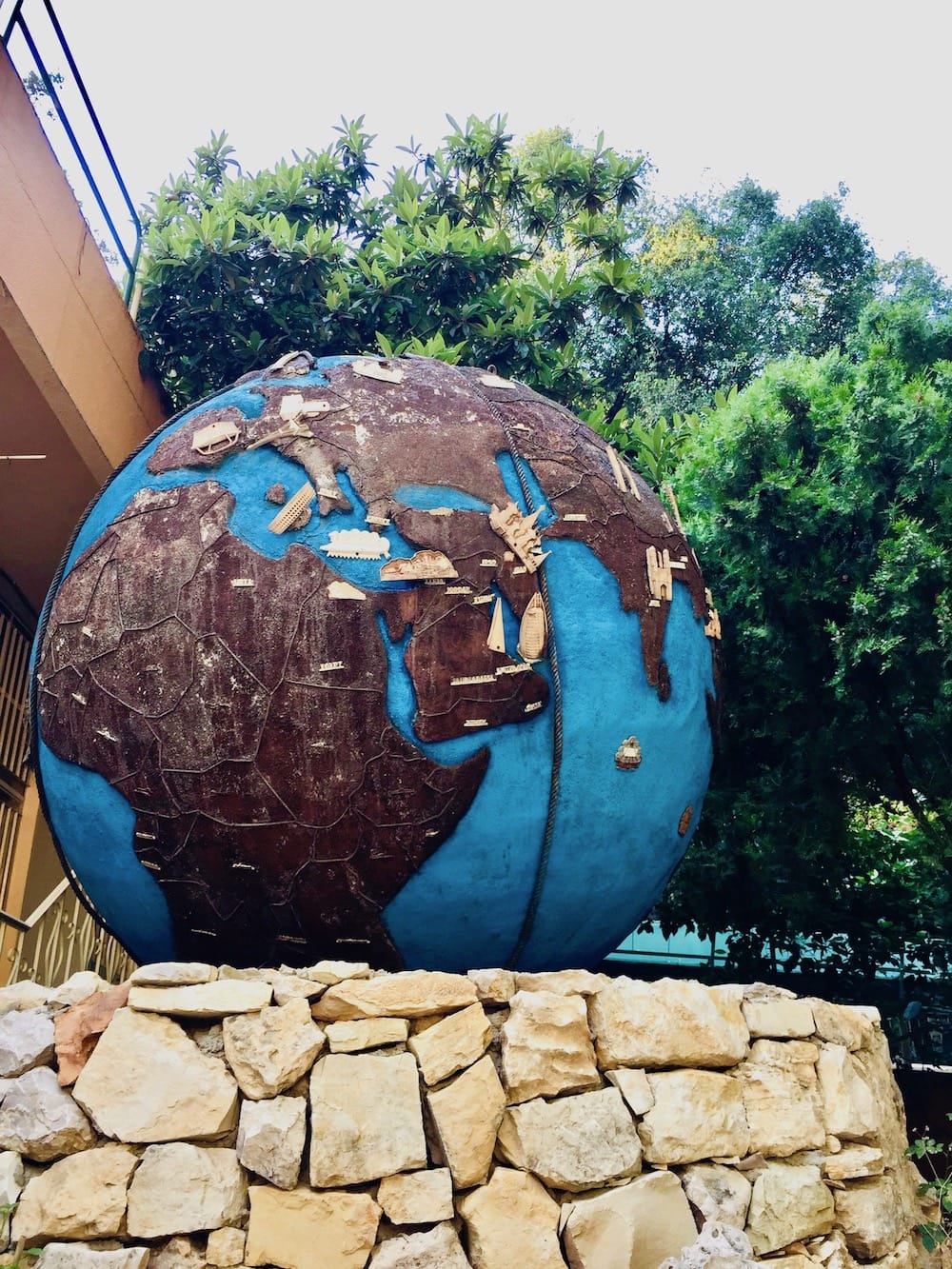 Jounieh Teleferique to Our Lady of Lebanon in Harissa

On your way from Jeita Grotto to Jounieh, stop for some lunch first. There are smaller family-owned restaurants on your way to Jounieh. Otherwise, there are a bunch of options in the town of Jounieh. After lunch, reach the Teleferique (gondola lift/cable car) by early afternoon (though sunset is also a gorgeous time to go). The Teleferique starts at the base of Jounieh (approximately 20 minutes away from Jeita Grotto). The gondola transports you up through pine-forested mountain villages to the statue of Our Lady of Lebanon in Harissa. Though I am not religious at all, I felt the sacred force of the Lady when I approached her.

History of Our Lady of Lebanon

The Lebanese Christians are known as one of the earliest converts to Christianity. Many believe that Lebanon was the first place The Apostle Paul went after fleeing Damascus. A monk named Maron helped preserve the Orthodox-Catholic Christians in Lebanon during the 4th and 5th century. It was during this time that the Christians of Lebanon became known as “Maronites”. The Maronites eventually swore allegiance to the papacy despite challenges under the rule of the Ottoman empire. 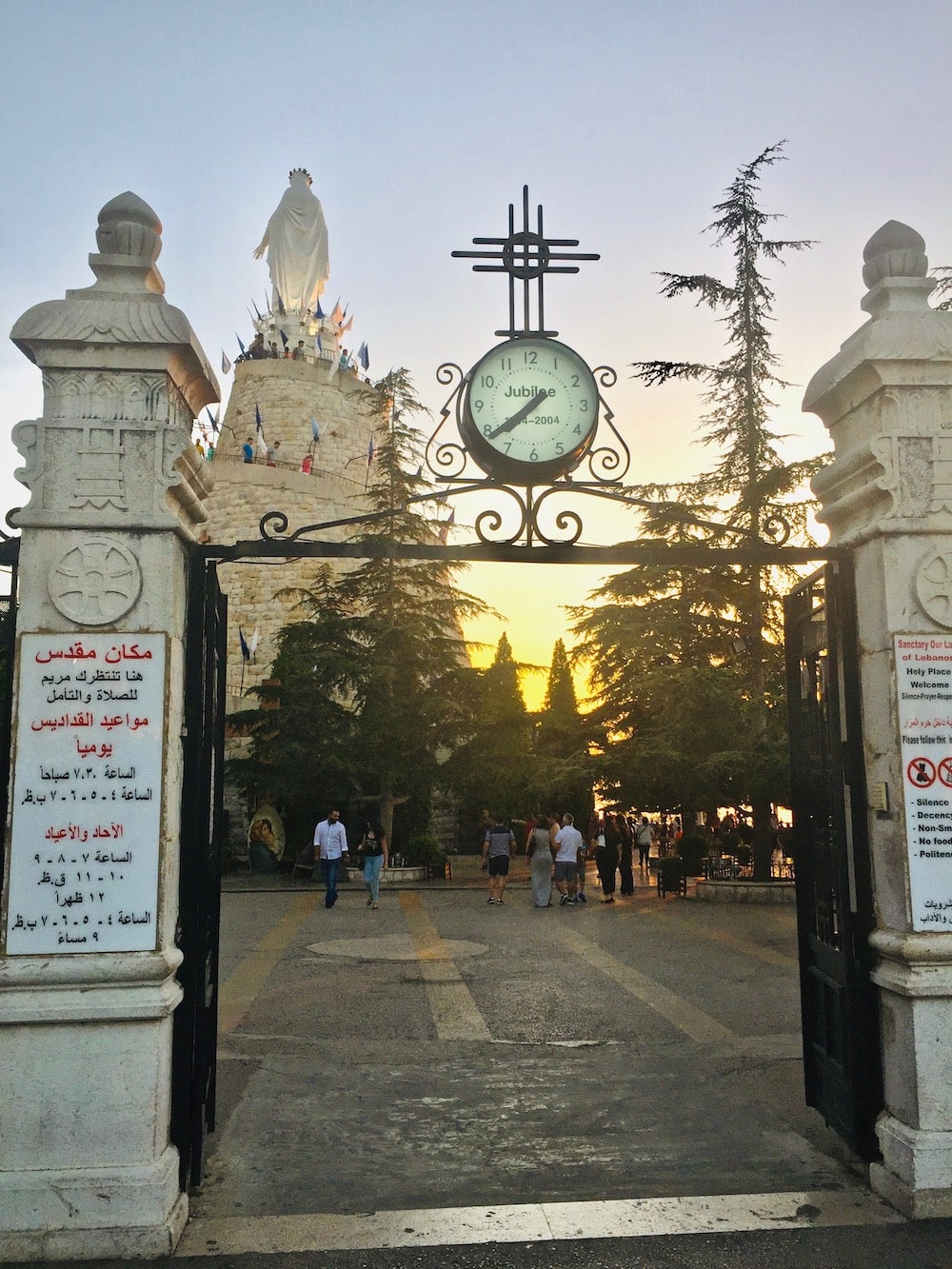 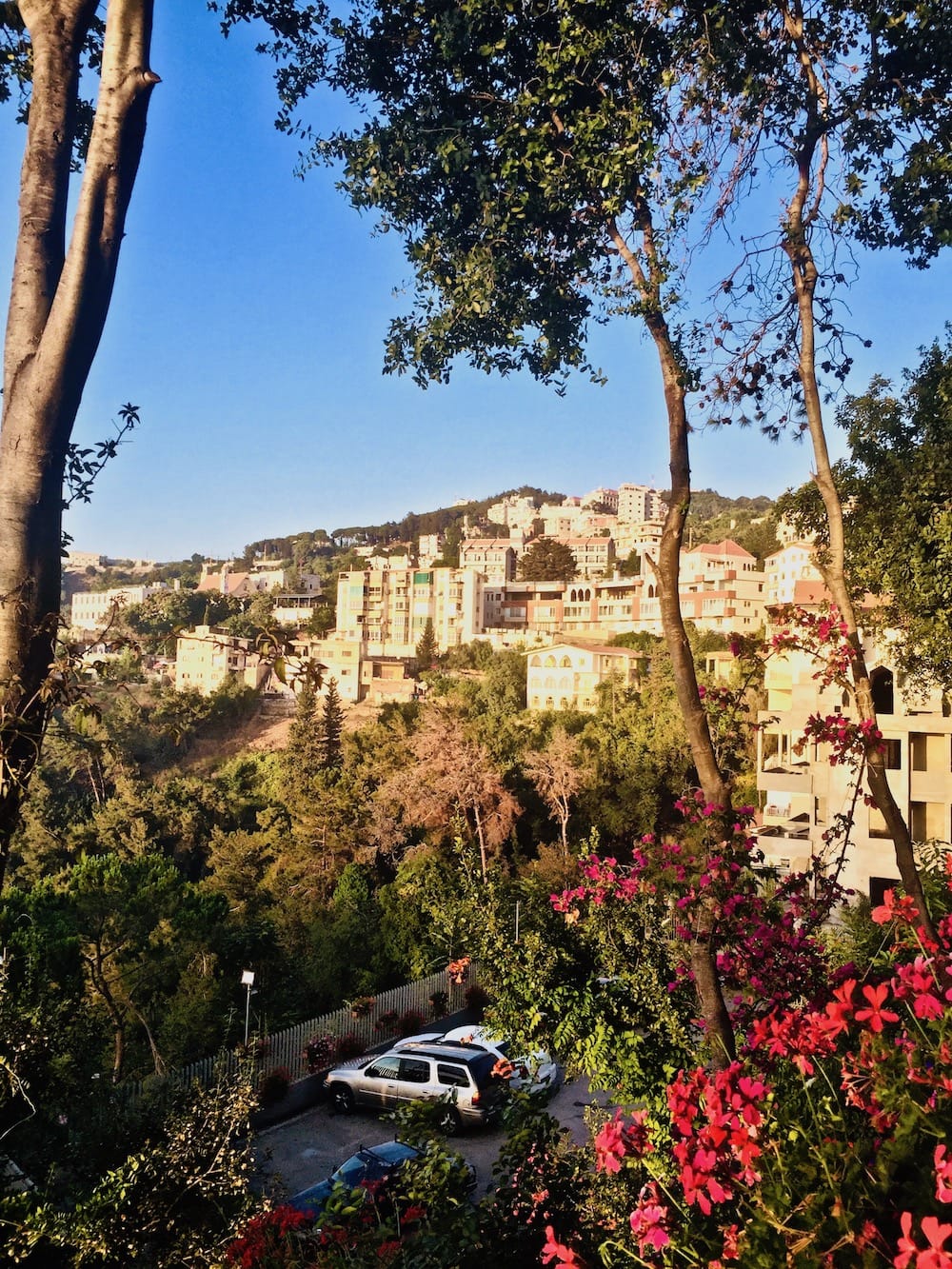 Maronite Patriarch Elias Hoyek decided to erect a shrine in remembrance of the “Immaculate Conception” dogma declared by Pope Pius IX in 1854. They envisioned a statue of the Virgin Mary that could be seen from afar and decided to name it “Our Lady of Lebanon.” The laying of the stone foundation took place in 1904 and the statue was built in 1907. The shrine was dedicated in 1908. It’s become one of Lebanon’s proudest and symbolic monuments today.

The statue made with cast bronze towers at over a hundred feet tall while a golden crown sits on top of the Virgin’s head. At the base of the Shrine of Our Lady of Lebanon is a chapel where pilgrims may worship. And it’s still known today as the second-largest Catholic church in the Middle East. 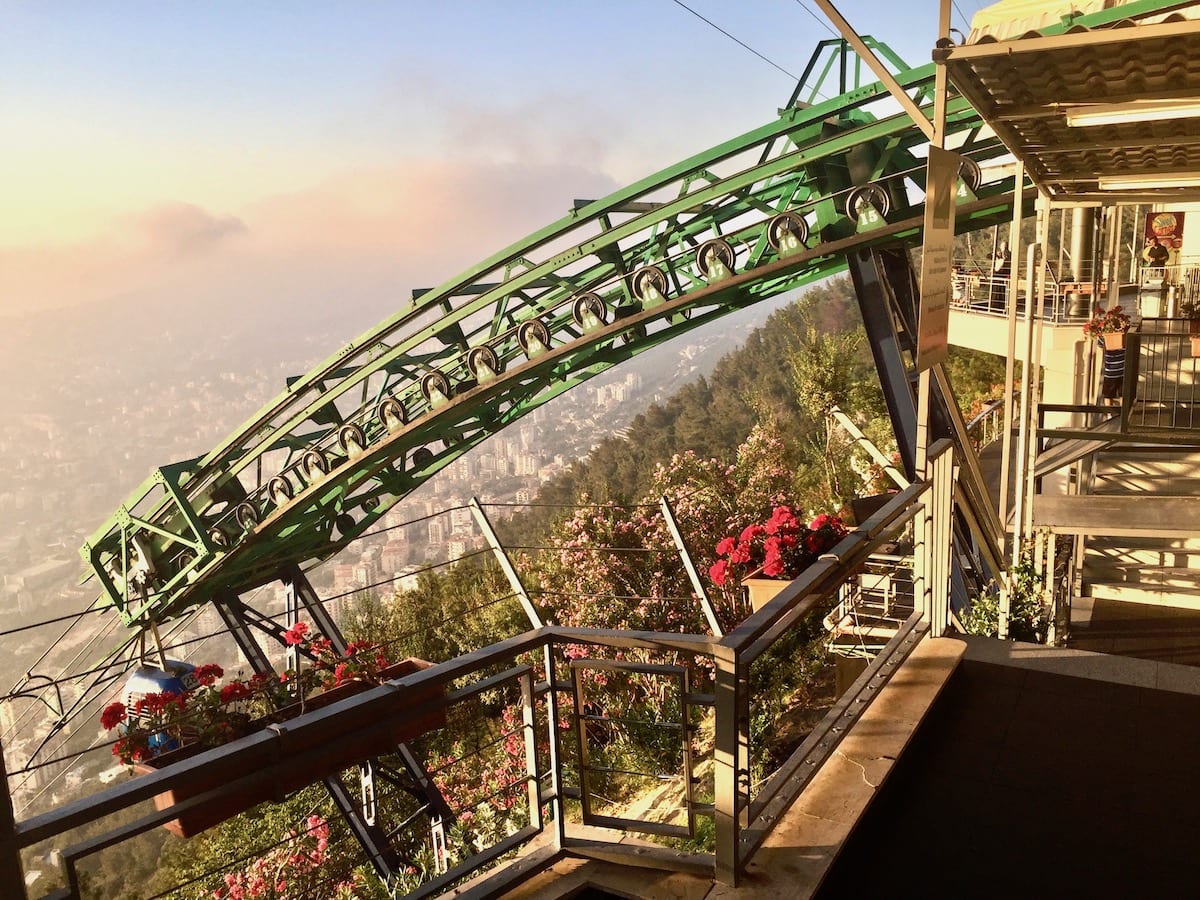 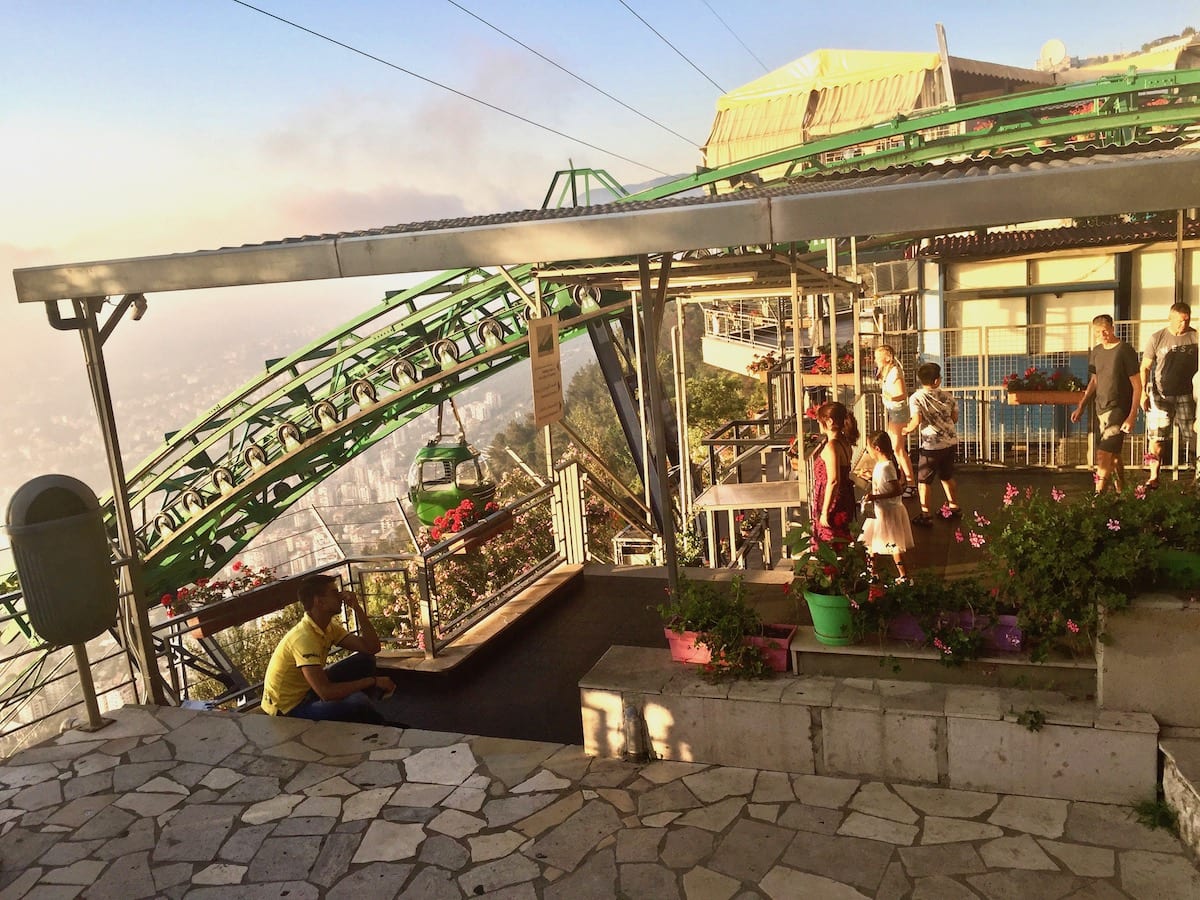 Taking the Teleferique from Jounieh to Harissa

The Teleferique of Jounieh takes approximately 9 minutes each way and is 1 mile long. After getting off the cable car, take the funicular to the sanctuary level. Allow yourself an hour to explore the Our Lady of Lebanon, the gorgeous view of the Jounieh Bay and the rest of Lebanon from above.

Tip: Unwind with a class at AK Yoga in Jounieh after your day of exploring Jeita Grotto, Harissa and Byblos.

The Ancient Fortress of Byblos

The drive from Jounieh to Byblos takes approximately 20 minutes (18 kilometers). Byblos is a popular destination for both tourists and locals due to its laid-back atmosphere. Known to host one of the oldest civilizations in the world, Byblos still holds it’s historic charm today. Some of its structures date back as far as the Stone Age. And there is undeniably something very special in the air. You’ll have to be there to feel it.

What to Do in Byblos: This coastal city is home to the Byblos Castle built in the 12 century, the medieval Roman port, and the Obelisk temple dating back to the times of the ancient Egyptians. You can visit these relics, then head to the Old Souk after for a walk and some shopping. There are also small beaches where you can lounge at, boats to rent, as well as restaurants and bars to stay throughout the night.

Where to Eat in Byblos

End your day by having a delicious dinner at Malena, a Mediterranean restaurant in Byblos. This restaurant features a sea view and serves a vast menu of traditional Lebanese and Italian dishes. Malena is known for its live-cooking barbecue, fresh seafood, and the full bar perfect for winding down after a long day of sightseeing.

Locanda – A la Granda serves traditional local food in a beautifully decorated Lebanese architecture house. Stone stairs lead you to this gorgeous restaurant shadowed by a Jasmine tree. Ask to sit on the terrace where you’ll get the perfect view of the fortress of Byblos and ancient ruins dating as far back as 5000 BC. The food is always prepared, cooked and served with pure love with incredibly friendly staff and ambiance. This restaurant has vegan, gluten-free, and halal options. 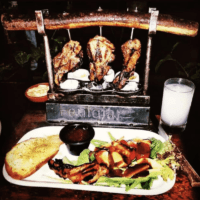 Feniqia is a cozy restaurant located in the heart of Byblos. This restaurant serves authentic Lebanese and Mediterranean cuisine. You can also spend the rest of your night at the bar and meet other travelers.

Where to Stay in Byblos

Byblos Fishing Club is a famous guesthouse and restaurant located just 3 minutes away from the Old Souk. Originally started by Pepe Abed in 1962, this is a local favorite of Byblos. You can also check out their cozy restaurant and enjoy their wide selection of Lebanese dishes. Book your stay in advance via Booking.com.

Byblos Sur Mer is a 5-star boutique hotel that is complete with a swimming pool, a restaurant, and access to the beach. This hotel overlooks the Byblos port and an amazing view of the Mediterranean Sea. Book your stay here.

Note: Airbnb is always a good option for accommodation and experiences in Lebanon!

From Byblos, I recommend going 20 minutes north to Batroun.
My favorite small beach town in Lebanon for several days of pure, hedonistic relaxation by the sea. 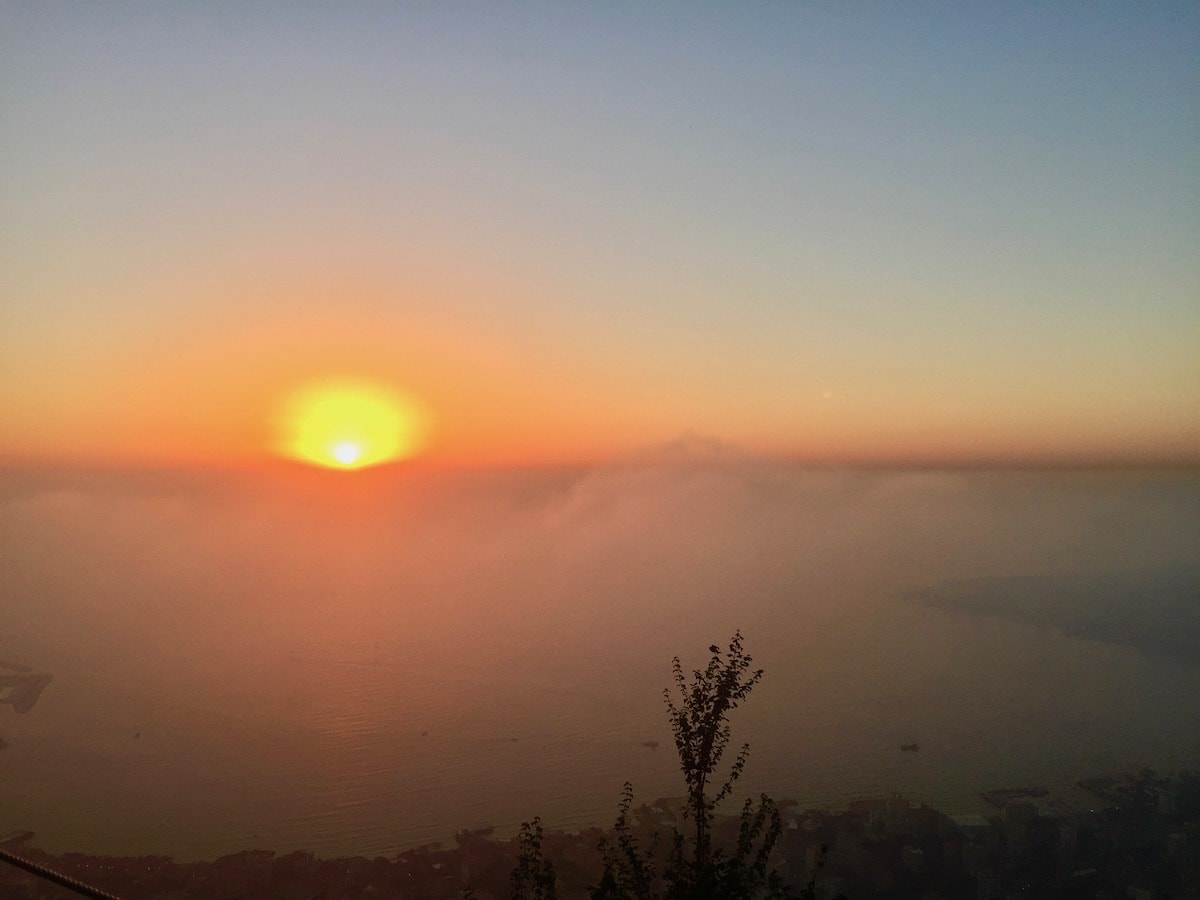 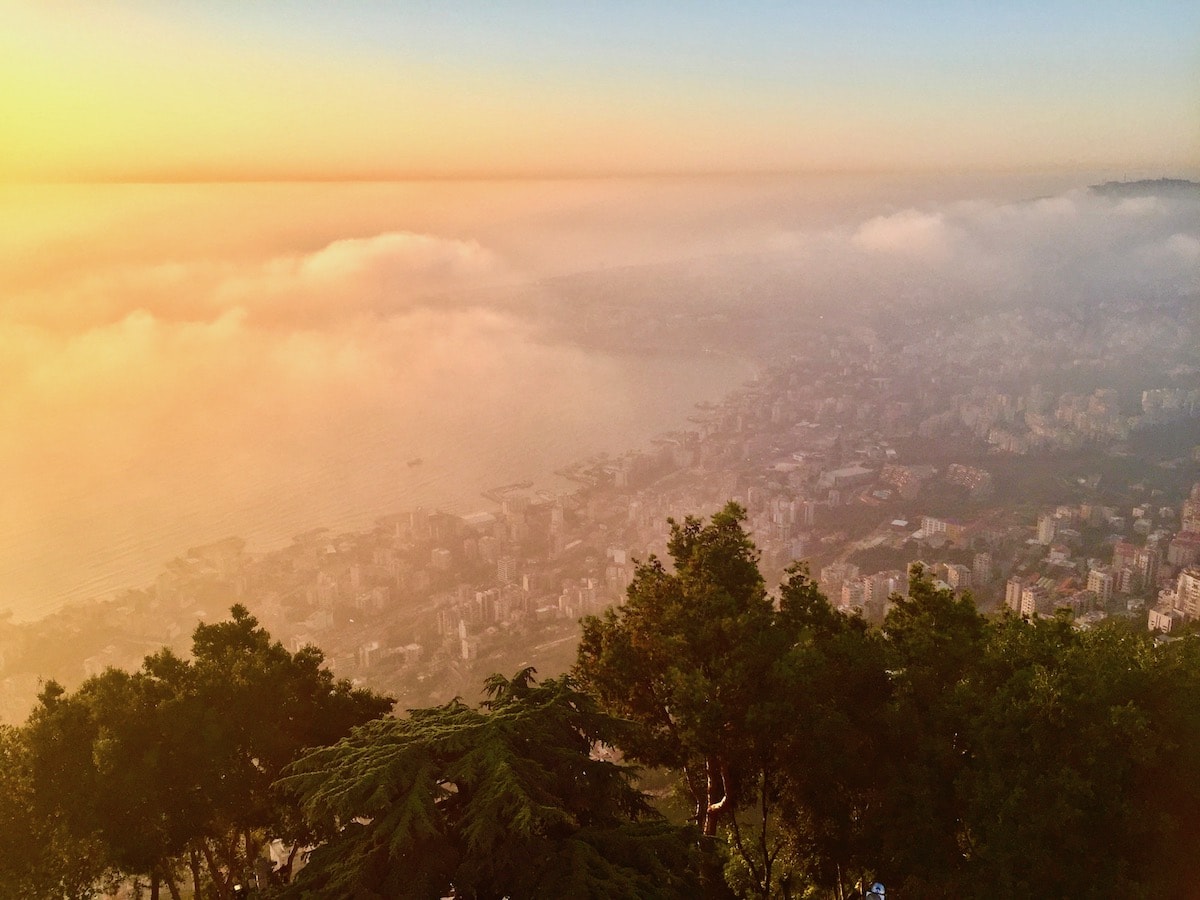 Read My other Travel Blogs on Lebanon: