My goal on this blog is to encourage everyone to Travel more & to see the World as a Safe place where mainly everyone’s goal in life, despite where they live, their religion, their political stance, that they all want to live long healthy, happy lives. People want their kids to go off to school, to be educated, and have a better life than their parents. Yes, there are some crazies out there, but I do believe people are born good. That’s why I love the World and I take every opportunity I can to travel and see what’s out there.

But most people live in a bubble. A bubble of their own town, their own ethnic group, their own group of friends, their own country. I don’t blame them, it’s very comfortable to do so. I know many people who were born & raised in Beverly Hills and have rarely left within a 10 mile radius from them, because it’s so easy not to.

It’s very common for most people to believe that what they know is the ‘truth’. Fewer than average can see that it’s all perspective and there’s very little truth in the world. Unless one makes the extra effort to seek knowledge outside of what is offered, through other news outlets, or by meeting people outside of their comfort zone, read books, to travel off beaten paths, we will continue to only know what is conveniently available to us, ‘our truth’. It doesn’t seem to register to many that the daily news has been carefully picked out by producers and writers aiming for one goal, and one goal only – Ratings. Depending on what news station you watch, it will lean towards a certain Political Party which will lean towards favoring certain issues while dismissing others.

I woke up yesterday morning to the newsfeed from LA Times of, yet, another shooting.  Sad that I was somewhat immune to it, although very sad to see another shooting. This time, a White TSA worker who went on a rampage at LAX with a huge rifle, which killed 1 & hurt several people. 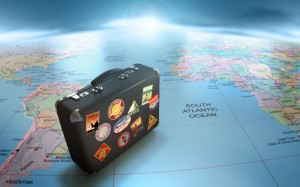 Very often, I’m bombarded/attacked with questions like “is it safe to travel as a woman?” “Is it safe to go to… ‘fill in the blank’ – Israel, Cuba, India, Mexico, Turkey.. when I heard blahblah on the news.” At times, I am restless and just want to ignore them, I feel it’s a lost cause. But most of the time, I muster up the energy to try and shed some perspective to others on why I travel and why I encourage them to also.

Have you thought about what our news looks like to others? My friend who traveled through Europe during the George Zimmerman trial, met many European & International Travelers staying updated with US news. They say “Oh, you’re from America huh? You guys LOVE guns & spending money on war! And are all women like the Kardashians & Honey boo boo?” “You guys love to talk like “what the F&*k sh1t!” I’m sure you’re offended now and think, how ignorant of them to think that about us? Yes that is ignorant for those that think that, that is all Americans are, from what they see on TV. There’s some reverse perspective for you.

I hate to sound like devils advocate, but is our country any safer, when our OWN citizens (not always taliban terroists), but White Anglo-Saxon US Citizen men, are shooting up what we should feel as the safest places – kindergardens, movie theatres, airports.. Just to name a few? During a period which the government made attempts to ban guns, the country’s gun sales doubled? Are we any safer than middle-eastern countries and southeast Asian countries we hear a few selected news about!? America certainly has the equality, the liberty, the freedom of speech many of those countries don’t.  My point is to be fair across the board (an innocent until proven guilty mentality when it comes to the foreign) and stop being so ethnocentric as if your own country, America is the safest place in the world.

Don’t get me wrong, I Love my country and especially my rights as a woman here, but shit does go down. You can’t control what happens, so why not go out and fearlessly Live, Travel, Taste, Learn, Ask Questions, meet people who are different than you, visit their homes if they invite you, and see the World as a beautiful place no matter how unknown it is to you. There are delightful surprises in every corner.