Wanderlust: a strong, innate desire to rove or travel about.

Yoga: a school of Hindu philosophy advocating and prescribing a course of physical and mental disciplins for attaining liberation from the material world and union of the self with the Supreme Being or ultimate principle.
// from Sanskrit: a yoking, union, from yunakti “he yokes”.

Festival: an organized series of special events and performances, usually in one place: a festival of drama 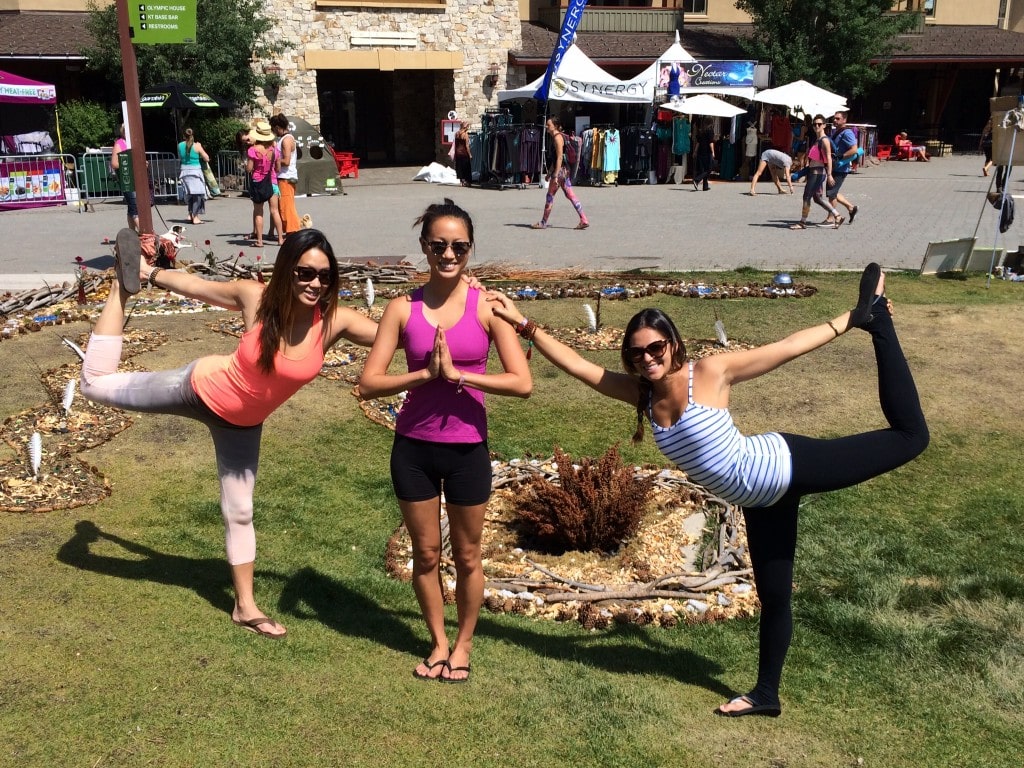 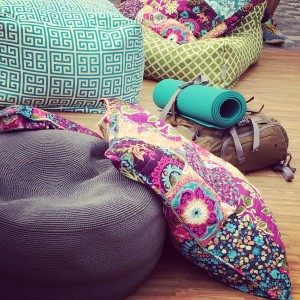 You add these 3 wonderful words together, and we get “Wanderlust Yoga Festival”, a vision of a few revolutionary Yoga Teachers 4-5 years ago, in an effort to bring Yogi’s from everywhere together for 3-4 days to practice Yoga (to unite), to celebrate life, a step towards making the World a more peaceful place through collective chants to the universe of “OM”, to relax in nature, to enjoy instrumental music, dj’s & unique musicians, to eat healthy, to bring free-spirited, fun-loving people, out of their normal urban lifestyle together and a place to just breathe.

I attended last weekend, and certainly experienced their full vision (with over 1000 others). Mission Complete. I felt fulfilled on the sunday drive home which normally is not the case every other “Sundays”.

My girlfriend and sister joined me on this road trip adventure 330 miles north, Thursday, 7/17. We left in the A.M. on a Ford Explorer from West LA, up the 5 fwy for over 270 miles north (through orange groves, the grapevine and alluring smell of cow fields) to Lake Tahoe, to a beautiful town named Squaw Valley where Wanderlust Festival would take place. We bought a 3-day festival ticket from fri-sun (you can buy a 1 day pass up to 4 days). After a few pee breaks and gas station stretch stops, we arrived 7 hours later, just in time for the Wanderlust Spectacular Performance at 8pm which was simply divine. Hemalayaa, the beautiful, fun Bollywood dance workout/Wellness Yogi teacher was the MC as a dozen of Wanderlust teachers danced in all white and performed Acro-Yoga (acrobatic Yoga), with DJ Drez. What a perfect way to ease in, through dancing with kindred spirits the night before the Yoga begins.

We checked into our Cabin 20 minutes away in the woods and crashed for an early start friday. Each of us packed our backpack with protein bars, water, coconut water, yoga mat, towel and a sweater for the chilly evening. Prior to the festival, we had scheduled our weekend through their online portal, with 2 Yoga classes, 1 speaker event, and an outdoor activity each day, and evening concerts lined up. In between the scheduled classes, we roamed around the center of the festival with at least 5 dozen vendors selling handcrafted Jewelry from all over the world, henna, Yoga clothes, and a section for local organic food, kombucha, coffee & juice. What was awesome was some generous food vendors such as Kashi and Gardein Vegan food were passing out samples all day long.

“Off the Mat, Into the World”

It was such an honor to take some of the most popular Yoga teachers all in one weekend including Seane Corn (World Activist, who’s started “Off the Mat, Into the World“). Also, Gurmukh (a legend in Kundalini Yoga), Rod Stryker, among other Yoga teachers. The first class I took may have been my favorite by far. It was called “A Tribute to Nelson Mandala“. A man who lived his life courageously supporting Human Rights, Equality & Freedom of all People, on what would have been his 96th birthday!

This class took course high atop 7000 ft elevation on the mountain, by way of a 15 minute lift. We practiced Yoga & Breathing Exercises outside in nature, with a live DJ for 90 minutes. It felt surreal being in a downward dog position, witnessing mountains and trees that’ve been in existence far before my time, behind me and windy breezes. 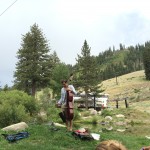 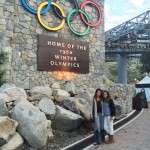 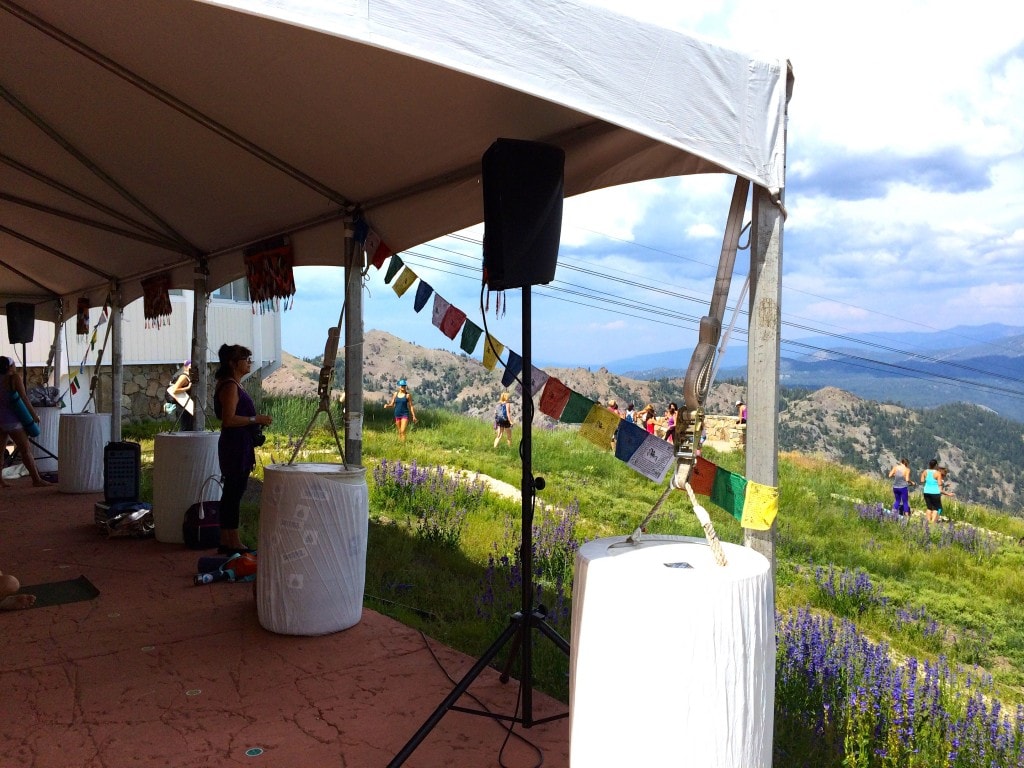 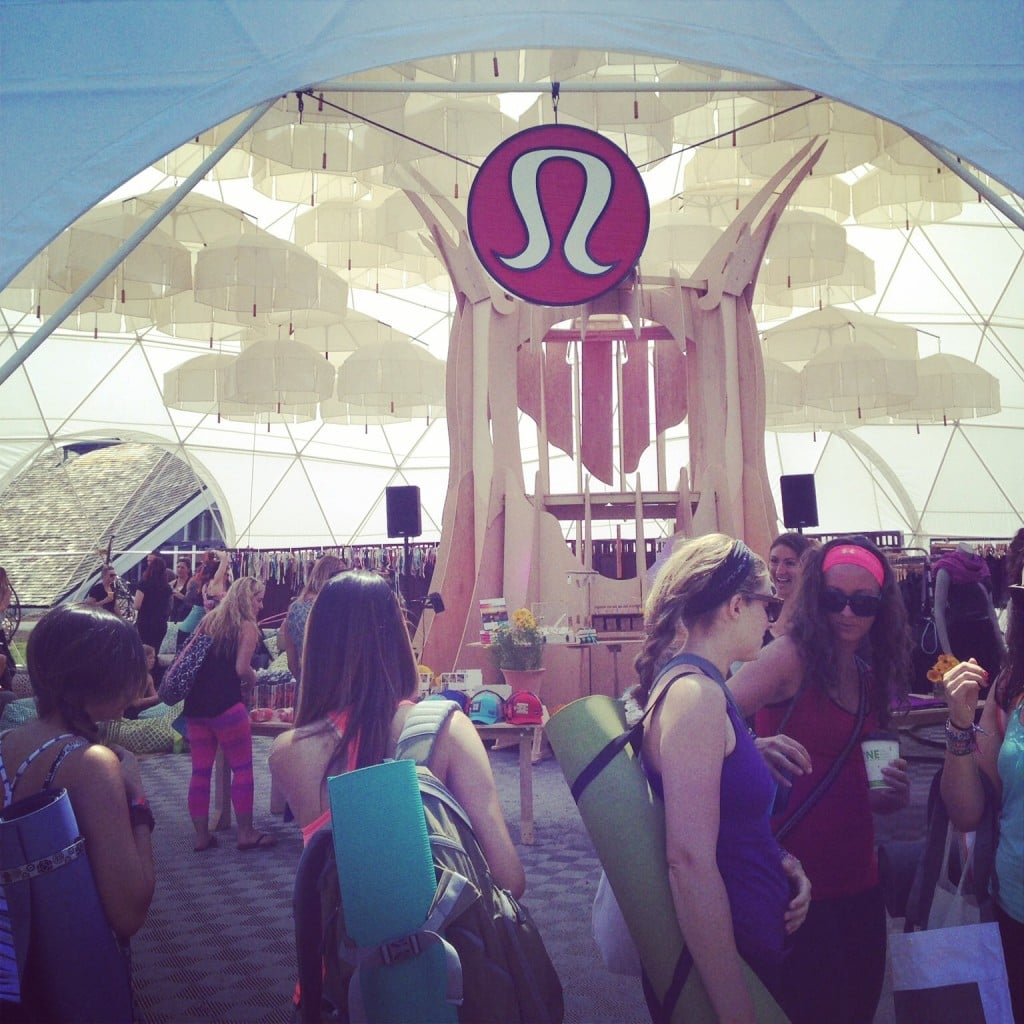 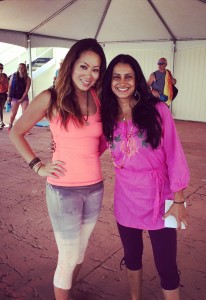 Other classes I took that I loved was “Dancegasmic” – a mix of Dance & Orgasm with Hemalayaa, “Becoming like Angels” – Kundalini Yoga with Gurmukh (it began to rain in the middle of class, and yet we enjoyed every bit of it!), “Detox Flow” with Seane Corn – plenty of twists to wring out the Toxins!

Later Saturday afternoon, we took a short hike to a grassy meadow, where Garth Stevenson played the Guitar for us as we layed on the grass and winded down our day.

In the evening were concerts lined up in 2-3 different tents, with the whole Coachella feel, minus the massive drugs (although there were some of that going around, especially the ganja very openly) and some organic alcoholic beverages such as Tito’s who was a sponsor (the best!). The highlight of the weekend was the Saturday evening performance by MC Yogi who rapped & sang renditions of old songs and new, while literally jumping on a surfboard through the crowds from stage while doing Yoga poses. I love him. Such great energy. 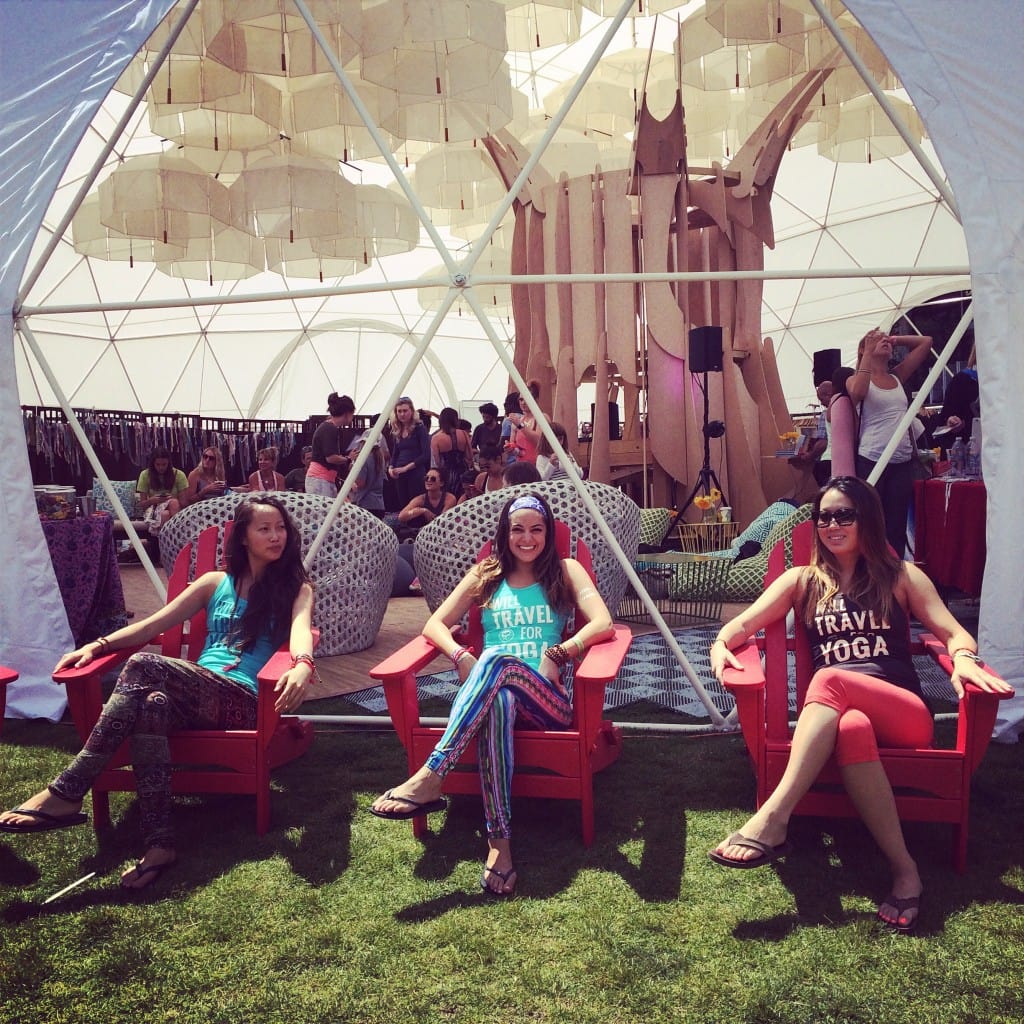 Sunday morning, before we hit the road back home, I took a nice hike with a group and local guide through her favorite path. She gave us 20 minutes in nature for “alone time” to wander and just be. Sure enough, in those moments alone, I found a water fall where I sat and reflected. 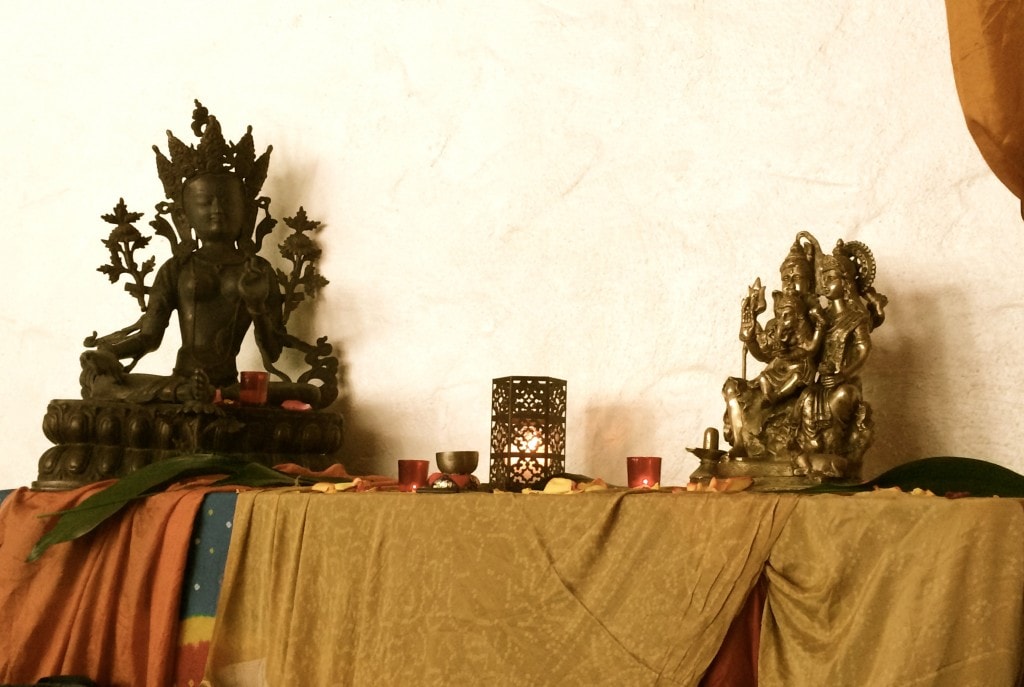 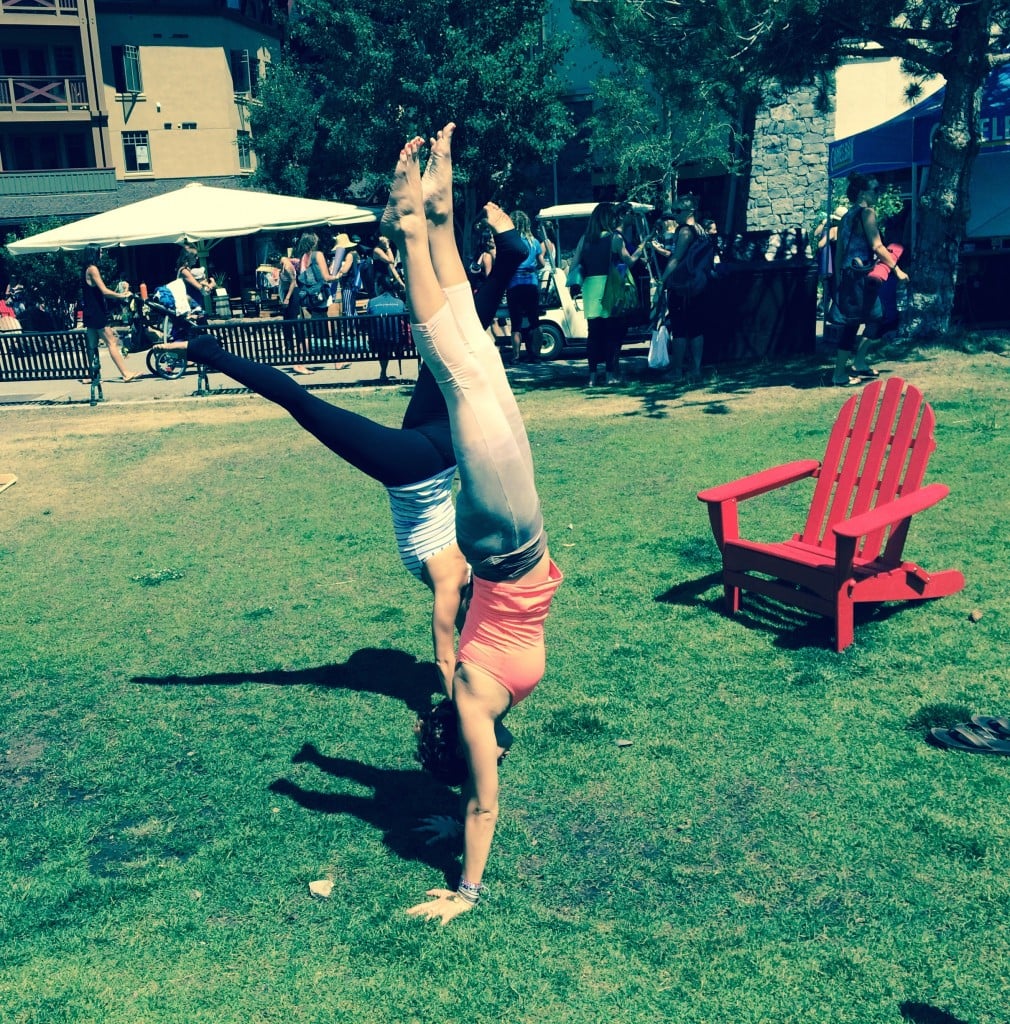 Being “In Our Element” at Wanderlust! 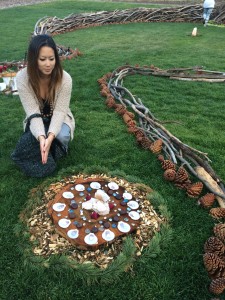 There was a moment in the midst of the festival where my girlfriend and I face each other and admit how much fun we were having, and realized that we were truly “In Our Element“. The feeling of being so completely present in the moment and not wanting to be anywhere else in the world.

Definition of Yoga is “to yoke”. The purpose is to bring us in the moment, into our breath which should lead us to “Being Present“. But the reality with most of our busy lives is that we aren’t always in the ‘present’. Especially if we are not working a job we love, in jury duty or sitting in LA traffic.

Regardless, we can try our best to make the most of it. There are those lucky moments though, where we don’t even need to try. Those certain moments in time, where we are at a certain place, at a certain time with certain people, where we just naturally feel “In Our Element”. It’s as if Fate brought us there and the stars aligned. It feels like pure Etopia and blissfulness.

Moral of the story: I realized I am happiest traveling, and in Nature, by any form of water, with good company and good music.

Wanderlust Festival occurs 7-8 times a year in different locations. They also offer 1 day Events with Wanderlust 108 which is a mini-triathlon: 5k run, Yoga & Meditation. Visit their Yoga Studio in Hollywood too! 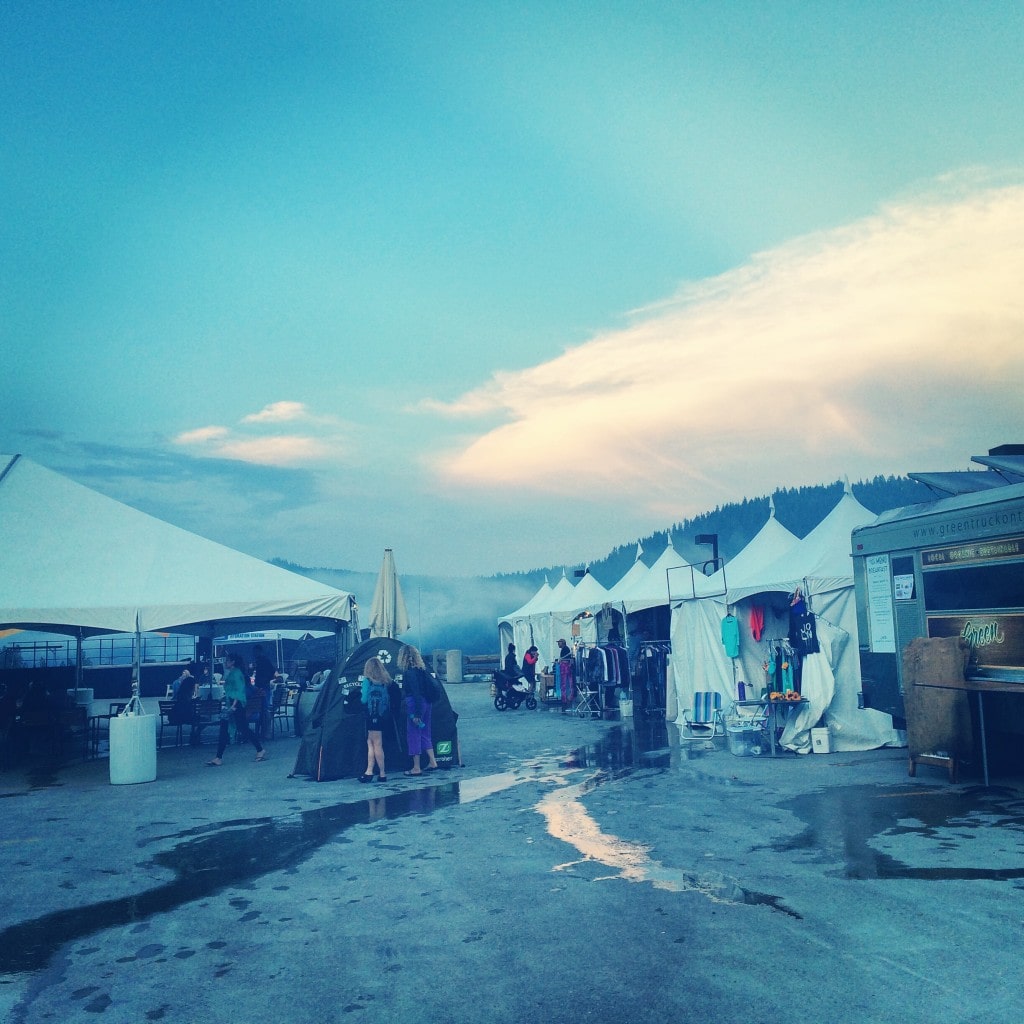 To find out more, visit Wanderlust Yoga Festival for all the events happening this year!