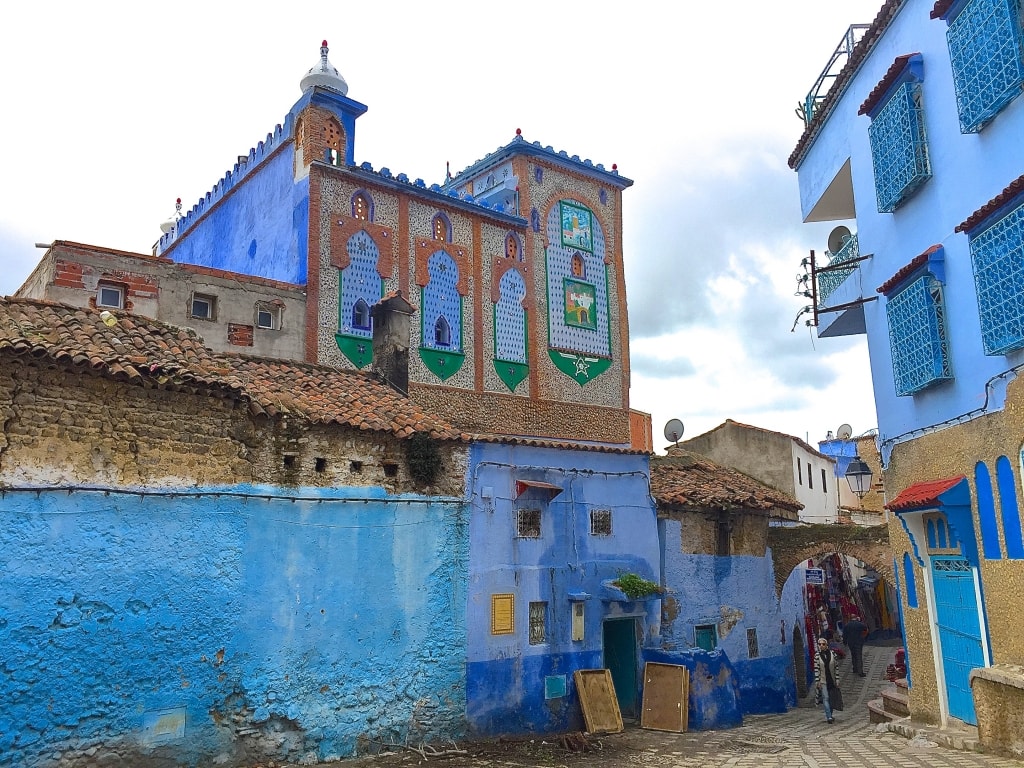 A trip to Morocco would not be complete without a stop to the mountainous blue city of Chefchaouen. While not bombarded by loads of tourism yet, hippies and seasoned European travelers have been visiting since the early 1960’s as a mystical untouched getaway. One of the main draw is its location in the Rif mountain, a fertile land of incessant hashish. This seemingly utopian town is a must-see and must experience destination that is one of the most charming places on earth. Welcome to your Chefchaouen Travel Guide. 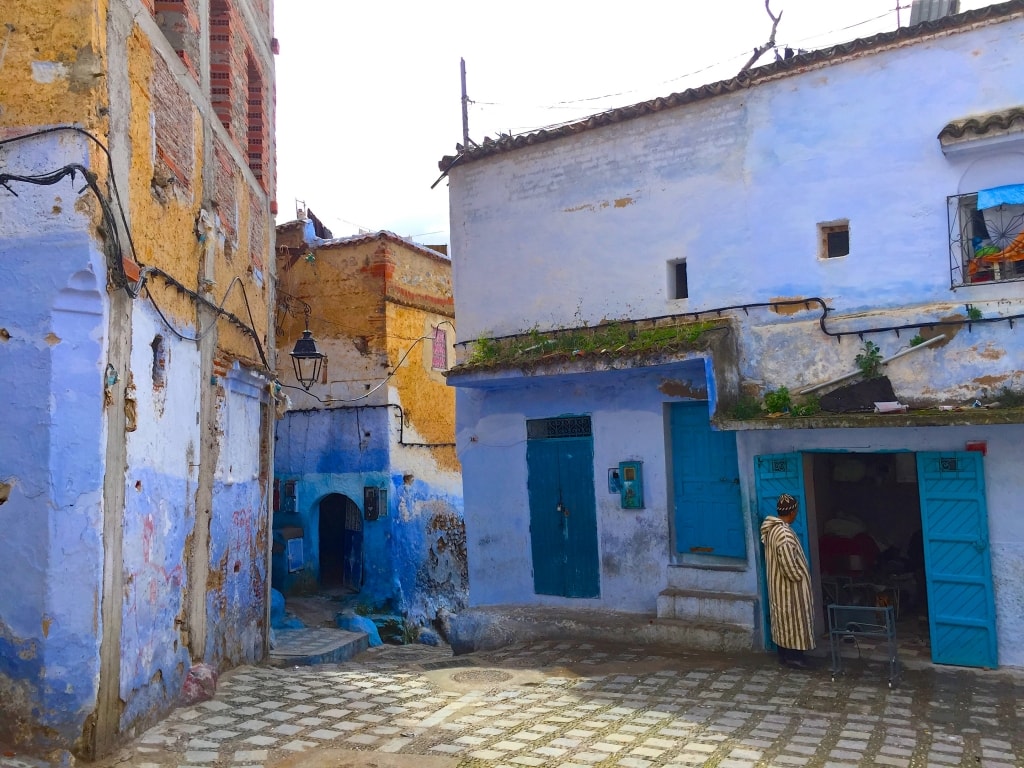 Many on the Moroccan tourist trail start in the international cities of Casablanca or Marrakesh. Make a stop to the Sahara or Zagora desert for a night or two of camping with Berber tribes and camels. Then make their way to Fes or Tangier for some leather shopping. Too many miss Chefchaouen which I think should be on the first of the list. Though I was only there for 2 days, I plan to go back for at least a week or more. 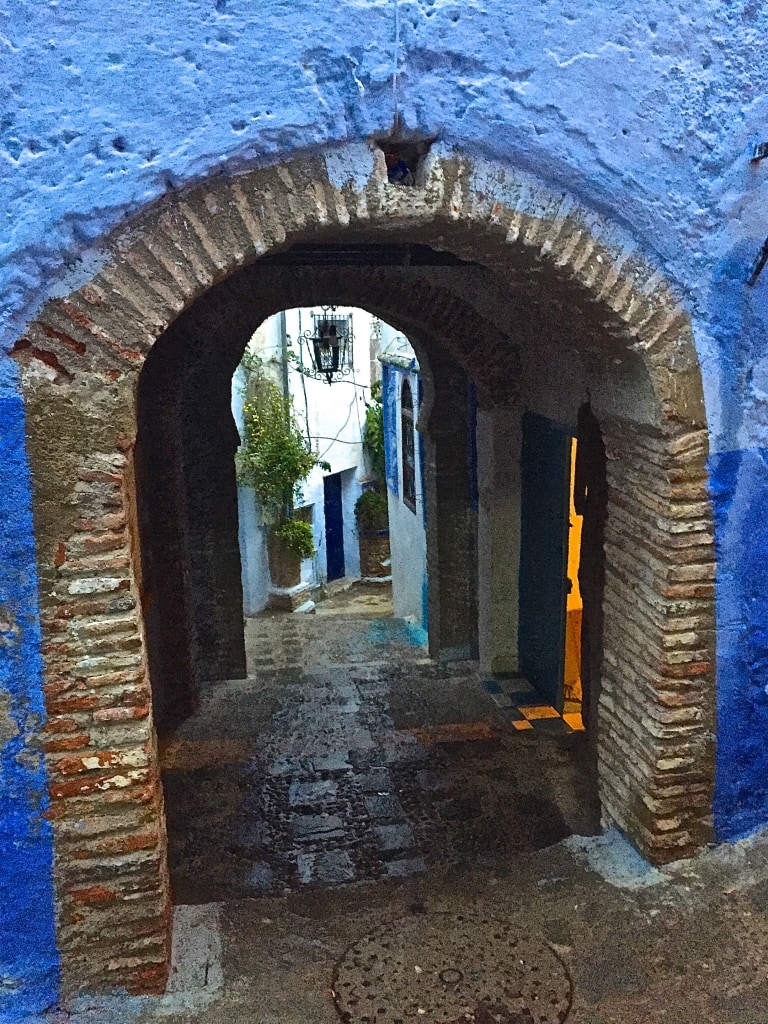 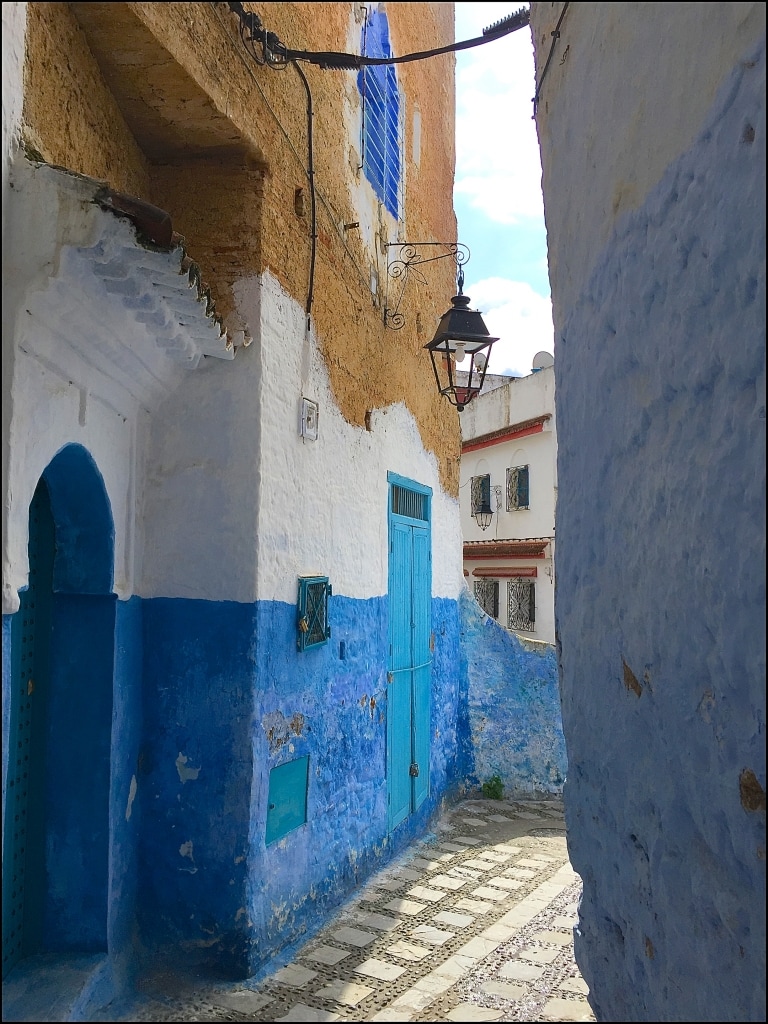 Chefchaouen bares a lot of resemblance to India’s Jodhpur Blue City due to the blue painted color and the style of the cement buildings.  But the meaning behind the blue-washed cities are different. The history, traditions, culture and people are a world apart. Coincidentally though, Jodhpur and Chefchaouen were supposedly found both in the 15th century.

A Little History on Chefchaouen

Established in 1471, this quaint city sits atop of Rif mountain. The 500 year old fortress at its city center was built by Moulay Ali Ben Moussa Ben Rached El Alami, to fight off Portuguese invasions of Northern Morocco. The earliest inhabitants were of Ghomara tribes, Moriscos and Jews who settled here after the Spanish Reconquista in Medieval Times. 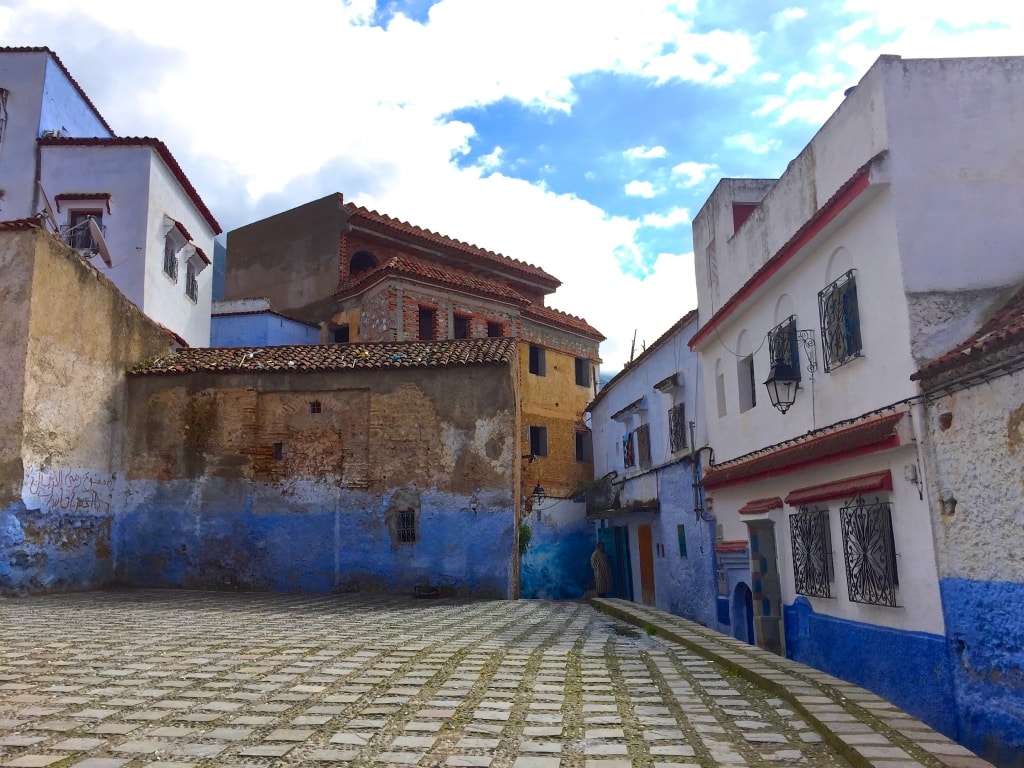 The origin of the blue-rinsed city is a common debate until this day. A common version of the story is that the Jews who fled the Spanish Inquisition brought the sentiment. The color blue according to Judaism states that dying thread with blue and using it during a moment of prayer would be a good reminder of the power of God. Painting the town blue would remind them to see the reflection of God which brings them closer to him.

Another version of the story is that the color blue keeps mosquitos away. What most would agree though, is that the color represents the sky which reminds them daily to live a life of spirituality, no matter what religion they are.

What Does the word Chefchaouen Mean?

The name “Chef Chaouen” refers to the shape of the mountain tops above the town, that resemble two horns (chaoua) of a goat. It translates to “Look up at the horns” from the Berber language. The locals though refer to it as “Chaouen“.

Today, the population is approximately 43,000 people of Portuguese, Moroccan and Spanish descent with Muslims, Jews and Christians living peacefully. Due to the influx of tourism, this village has begun to flourish bringing a more sustainable life to the residents. There is this timeless charm of seeing the color blue, and is certainly picturesque and incredibly photogenic for us travelers. 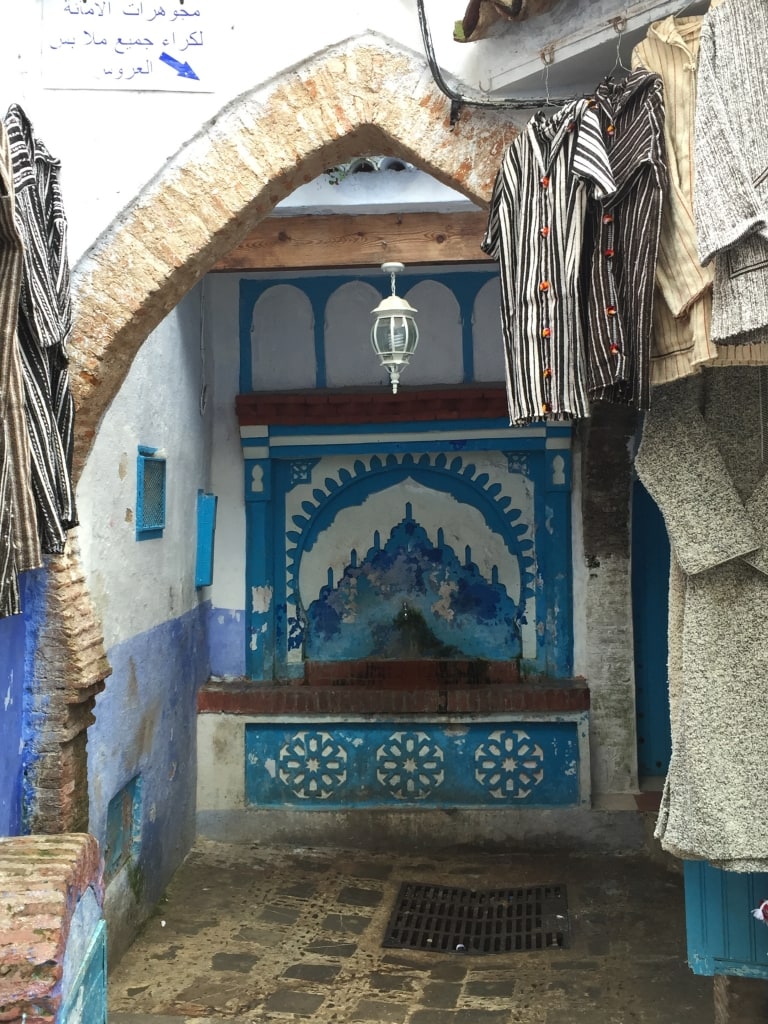 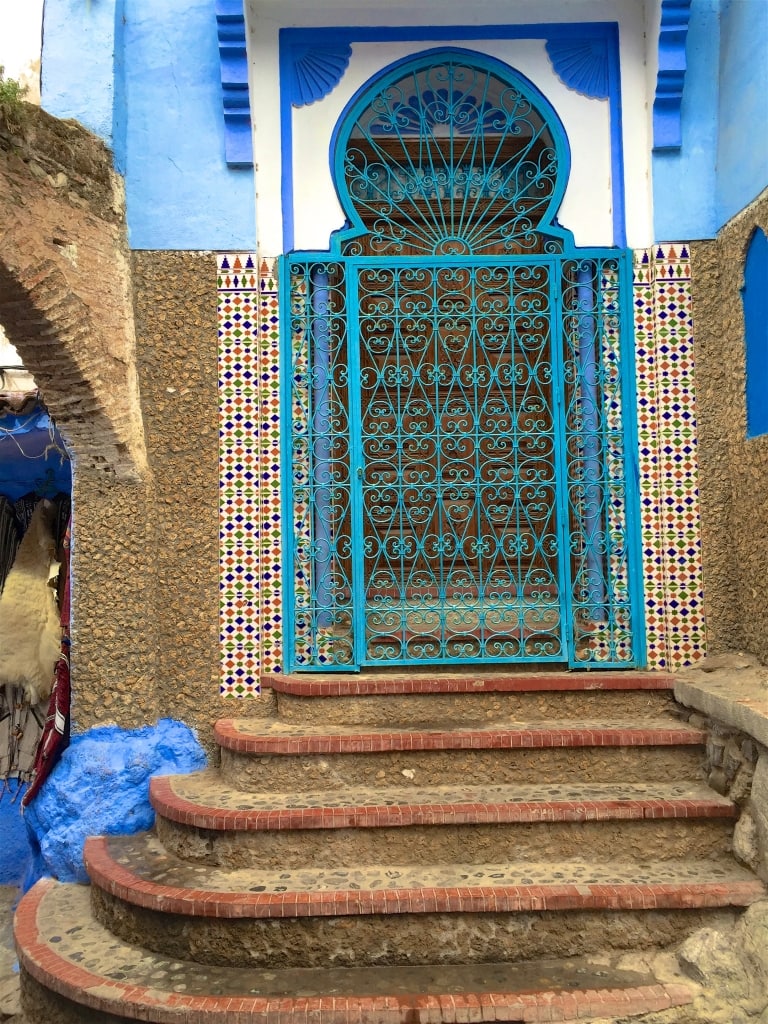 Getting to Chefchaouen: Roadtrip!

If you plan to explore out of the main areas, I would recommend renting a car. 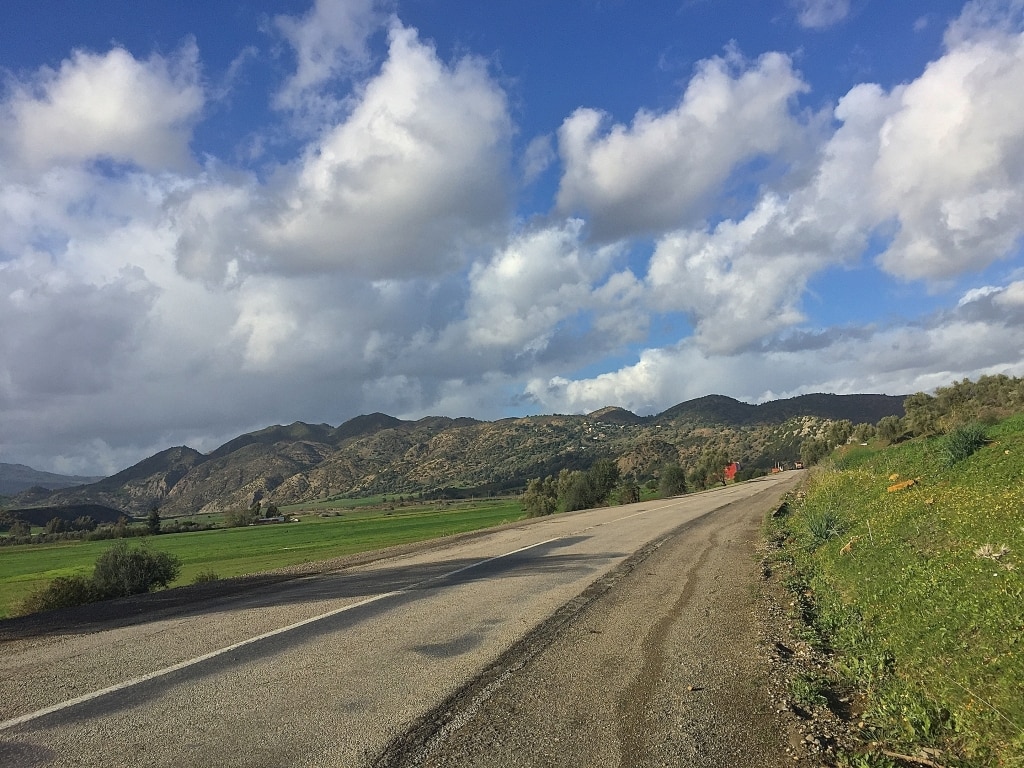 2 major Highways run practically parallel on the route to Chefchaouen from the west coast of Morocco.My friend and I rented a car from Essaouira and reached to Chefchaouen in a day and a half. This was done at a leisure pace, stopping off small towns for snacks and coffee. Our first stop was in Al Jadida for lunch. We then drove past Rabat and both agreed that it seemed too busy so we kept driving. We did want to explore Casablanca as we reached a bit more north but decided to save it for next time to preserve time. Something told us inside that Chefchaouen was worth the time and drive. As the sun began to set, we decided to call it a night.

Kenitra, a Halfway Point from Essaouira to Chefchaouen

Kenitra, a port city with many US Navy, was the town where we would search for a small hotel. The next morning, we hopped in our car and continued on our journey north while picking up a hitchhiker off the highway into his town of Ouezzane. Hitchhiking in Morocco is very common between both men and women. Pick up, or hitchhike at your discretion! After an hour drive, he invited us to his home for tea. Unexpectedly, we ended up spending a whole afternoon with his wife and 1 year old baby, sharing a delicious meal and conversation all afternoon. It was tough to leave as they offered us to stay the night and genuinely seemed sad to see us go.

We made it just in time to Chefchaouen for sunset. The magical, mysterious mountain scenery was even more idyllic than the photos and beyond our wildest imagination. We wandered around and found an affordable, colorful Riad and checked in.

Driving in Morocco: Is it Safe? Is it Doable?

The thought of driving in Morocco may seem intimidating but was actually not. There are only 2 highways that run practically parallel to one another up the western coast of Morocco. It was a girlfriend and I in this rental car. There are police checkpoints every hour or so, never a threat to us. It would just be a glance at us, a wave and a hand wave for us to pass. Not once did we encounter any type of harassment and was only greeted with friendliness and curiosity where we were headed. Besides driving through Rabat and Casablanca where it became a bit crowded, the highways were practically empty. This was in late February just before high season.

The drive through the less traveled roads of the countryside was absolutely charming. At times when we stopped to use the loo, for coffee, or for photographic opportunities, people were so incredibly friendly. Moroccans and the rest of the Middle-East are known for that hospitality, but it’s at it’s core when in the countryside.

Don’t want to Rent a Car? Use the Luxury Bus or Hire a Driver

If you plan to stay in the main tourist route and don’t want the hassle of driving a car, there are well-run, affordable, luxury busses that can transport you between the main tourist destinations. For example, Marrakech to Essaouira for $10 in an air-conditioned bus with wifi. There are also affordable tour companies and private drivers for hire. Chefchaouen is situated between Tangier and Tetouan on the northwest of Morocco. It takes approximately 8-10 hours to drive to Chefchaouen from Marrakesh (570 kilometers) or Essaouira (726 kilometers).

Supra Bus is the luxury bus I took which I’d highly recommend. You could book the ticket ahead of time and just show up to the bus station 15 minutes before departure. There are flights available also to Chefchaouen if you are pressed for time, though if you have time, I would highly recommend you drive there. Leave early in the morning and arrive by sundown. Or go at a slower pace like us, stopping whenever you feel.

Rif Mountain has got the Hash 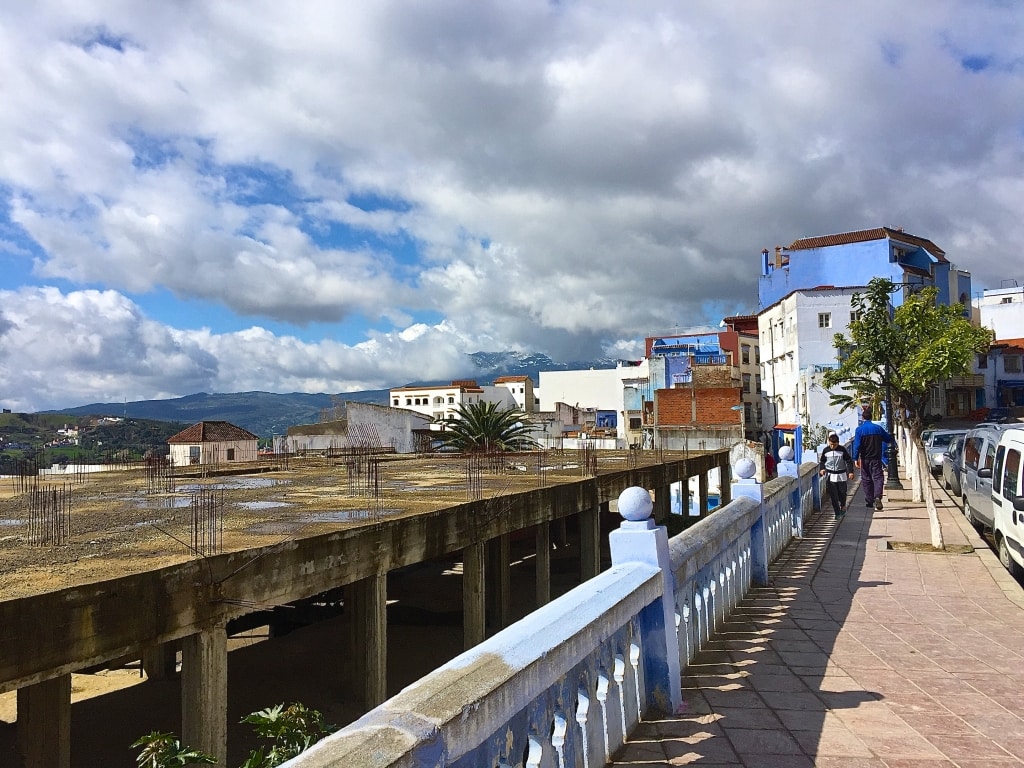 Chefchaouen sits on the mountainous region of the Rif, which has also been known to have some of the best Hashish in Morocco. Western hippies have been frequenting this village for the last few decades for weeks to months at a time to enjoy the freedom and luxury of quality marijuana.

There are plenty of outdoor adventures to engage in, such as trekking in the Rif. The town is unpopulated and untouched, with a vast landscape of greenery. Another recommended option is for a 45 minute drive to Talassemtane National Park, conserved in 2004 as one of the last Moroccan threatened Fir Forest. 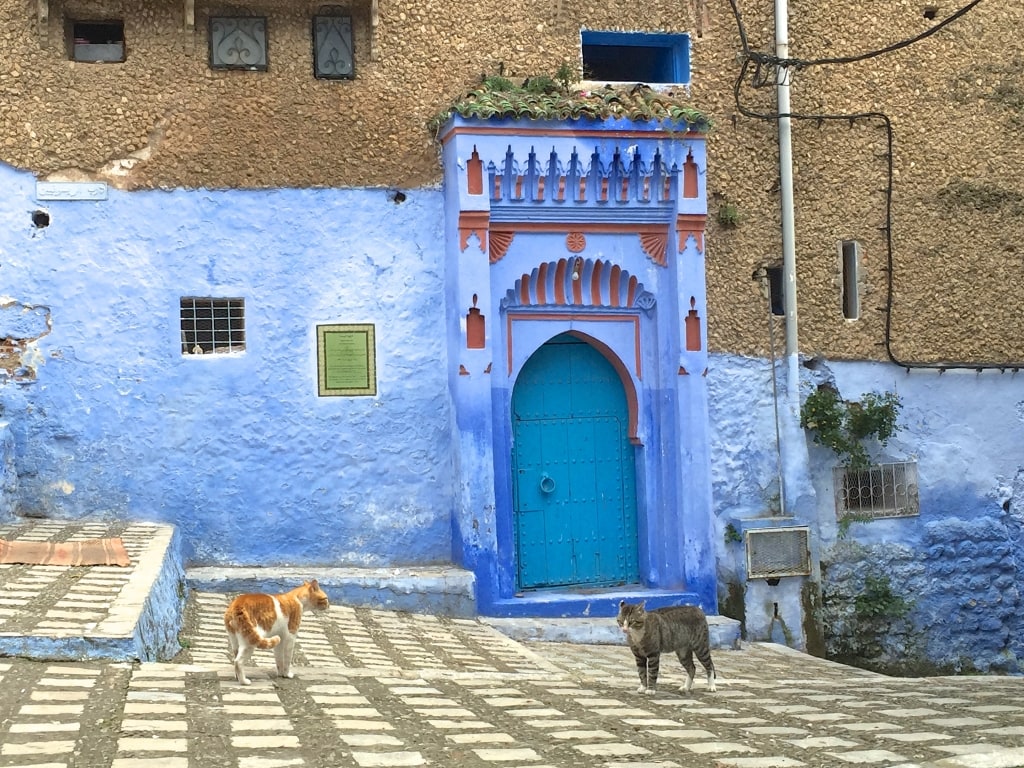 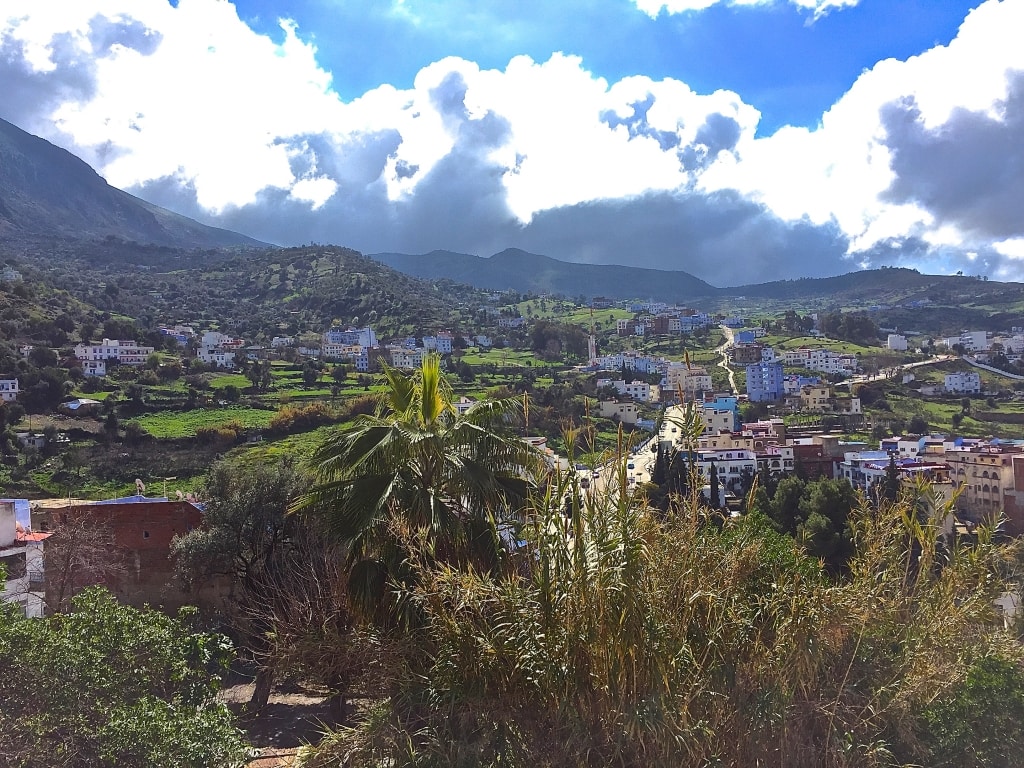 As far as sight seeing goes, there is a few in Chefchaouen. But mainly, it’s about simply chillin’. Just wander and rest where you see fit. Go on a hike. Eat at random cafes. Talk to locals and travelers. Smoke some hash. The Old City Medina is a good starting point. It’s a small enough labyrinth that you virtually cannot get lost. But if you love to shop, there’s enough shopping to last two days. They are known for their local handicrafts of wool, weaving, blankets, soaps, olive oil and leather products. After some shopping, make your way to the Grand Mosque and Ethnographic Museum. 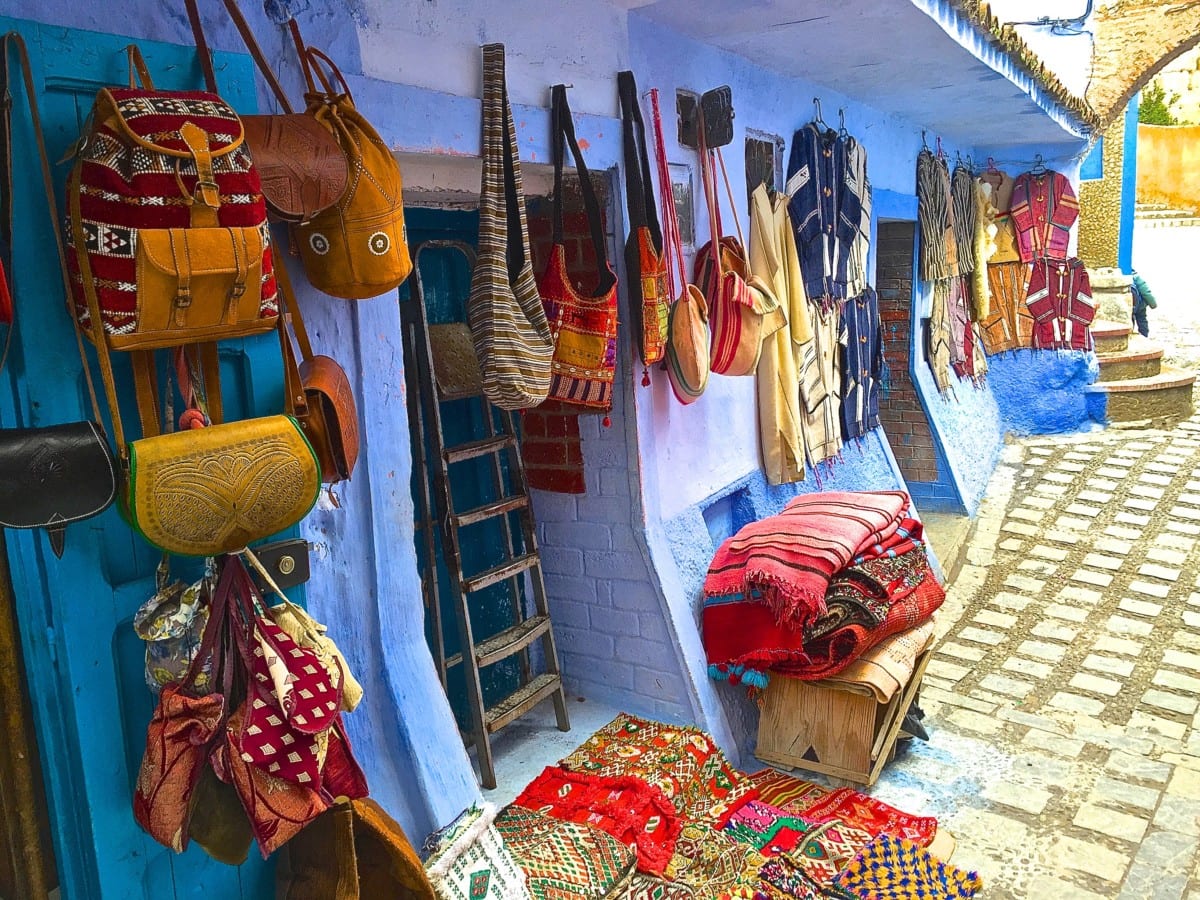 The locals are extremely laid back and the shopkeepers will more likely invite you in for tea to chat than they will to push to sell you items. Prices start 30% lower than the other major Souqs in Morocco. There may then be room to bargain at another 10-30% so I would save your shopping trip for Chefchaouen. And with as much luggage as possible!

What to Eat in Chefchaouen 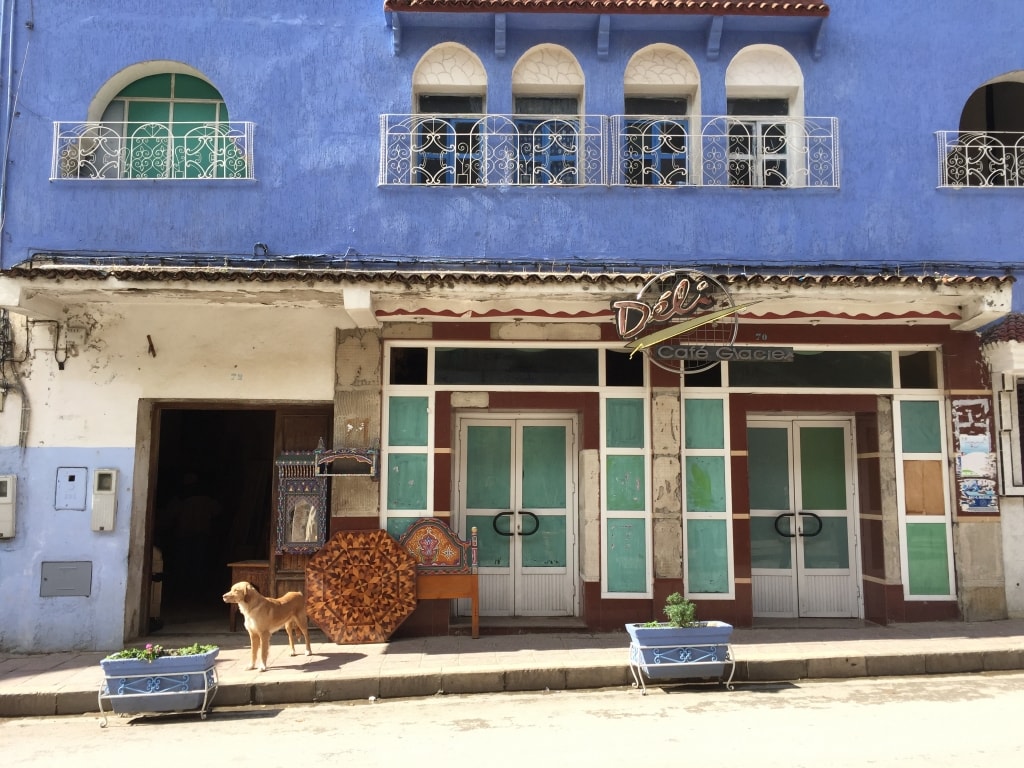 A tourist favorite is their local goat cheese, goat butter and local mountain honey. There are plenty of family owned restaurants for traditional Moroccan Tagines. I have to admit we opted for a Pizza night at Mandala restaurant, which did not disappoint. Sometimes, you just need to mix things up after a few days of traveling abroad!

Traveling as a Woman in Chefchaouen 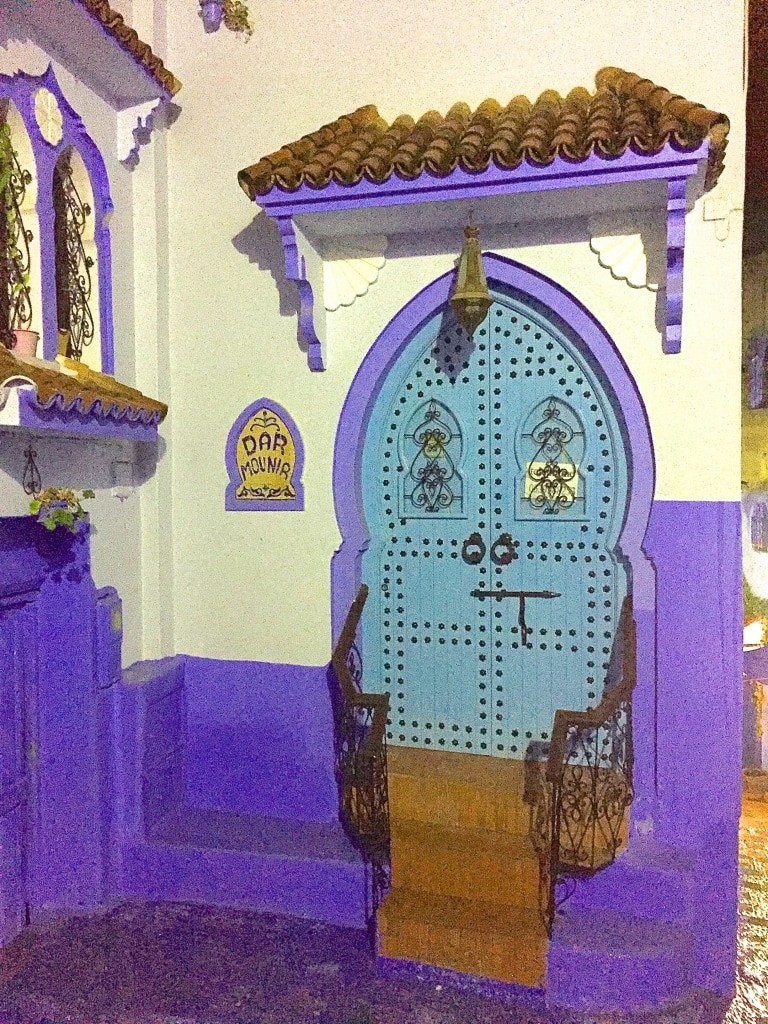 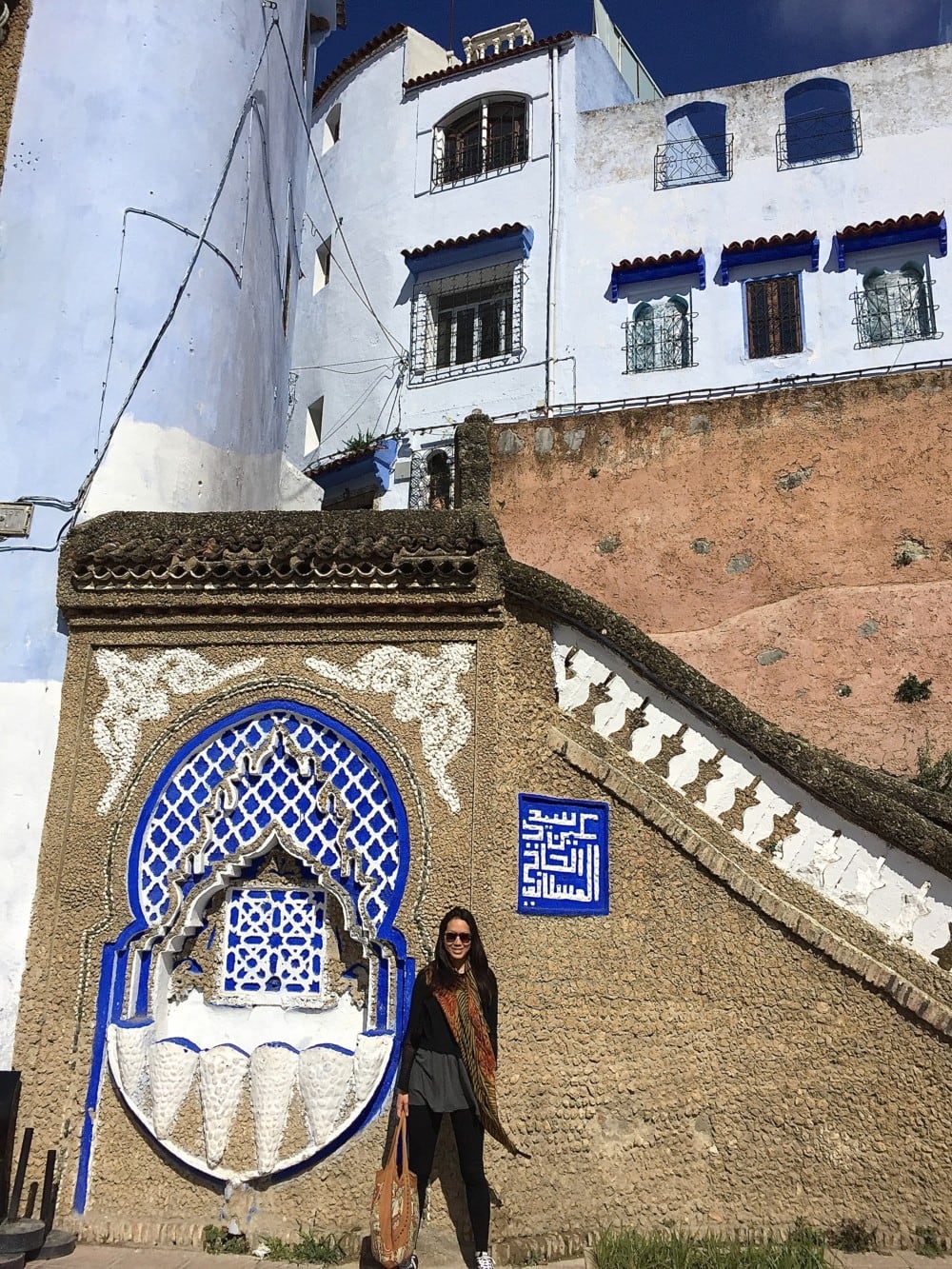 Many women are concerned about traveling in Morocco. While in the bigger cities of Morocco, there will be more touts, shop-keepers and local men hollering, there are rarely cases of actual physical harm. It is safe to say that Chefchaouen, being the small laid-back town that it is, that it is even safer to travel as a woman here than the major cities. My friend and I had no issues here when shopping during the day or even walking late at night. As usual, use your discretion and common sense. 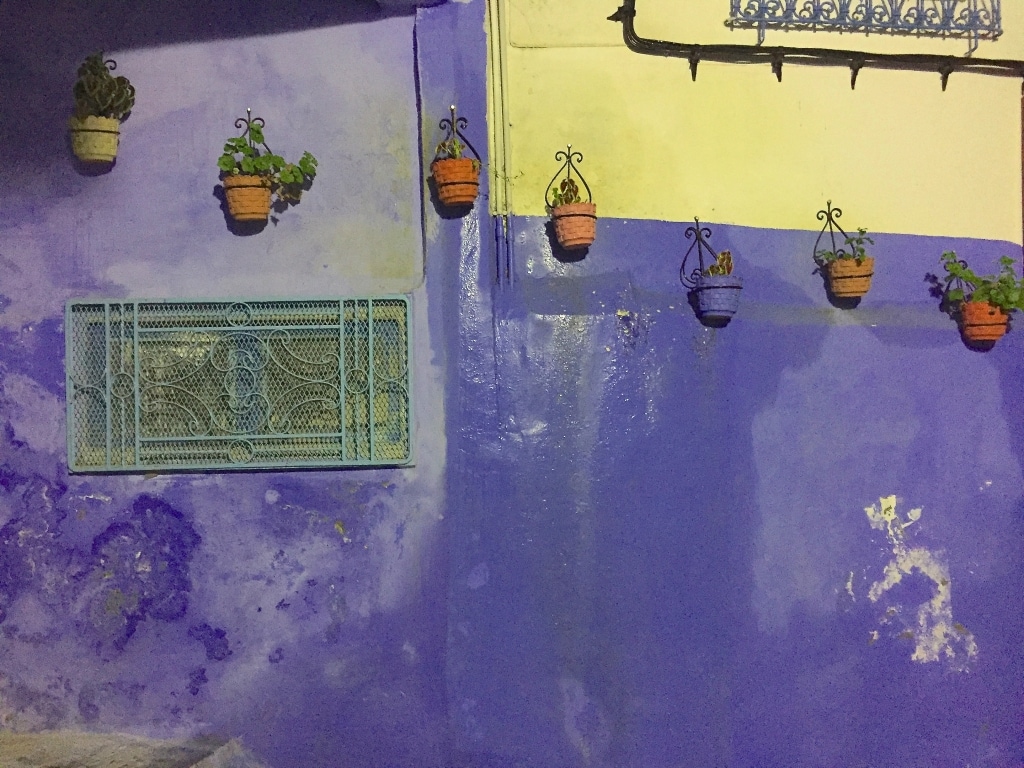 Where to Stay in Chefchaouen 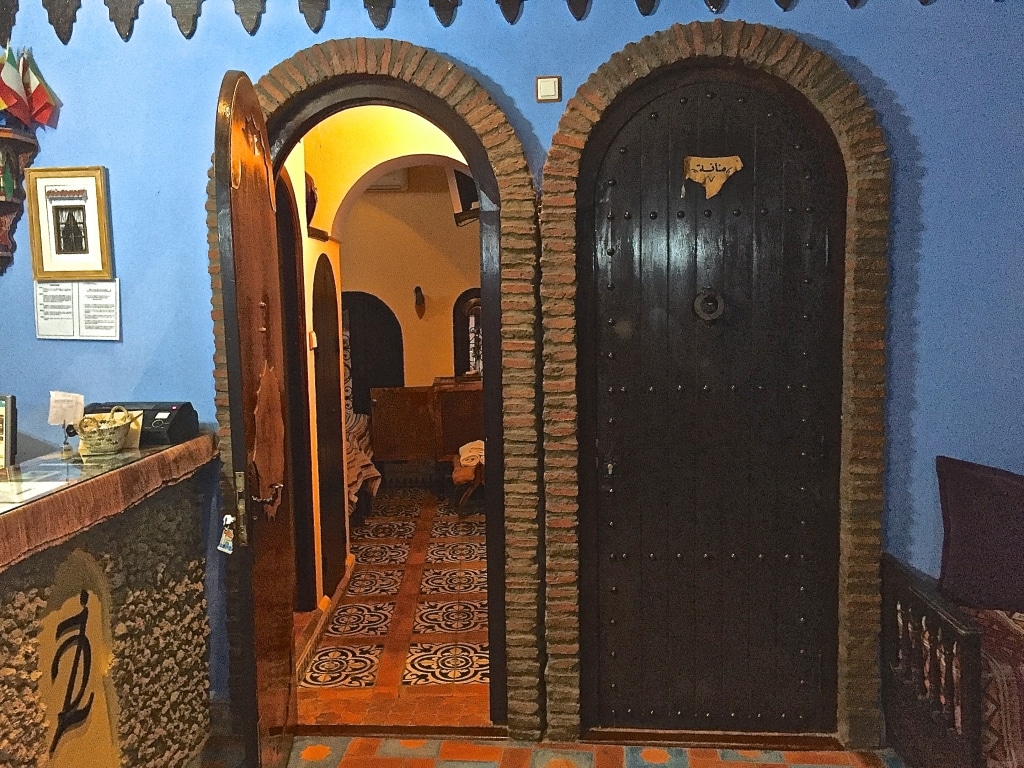 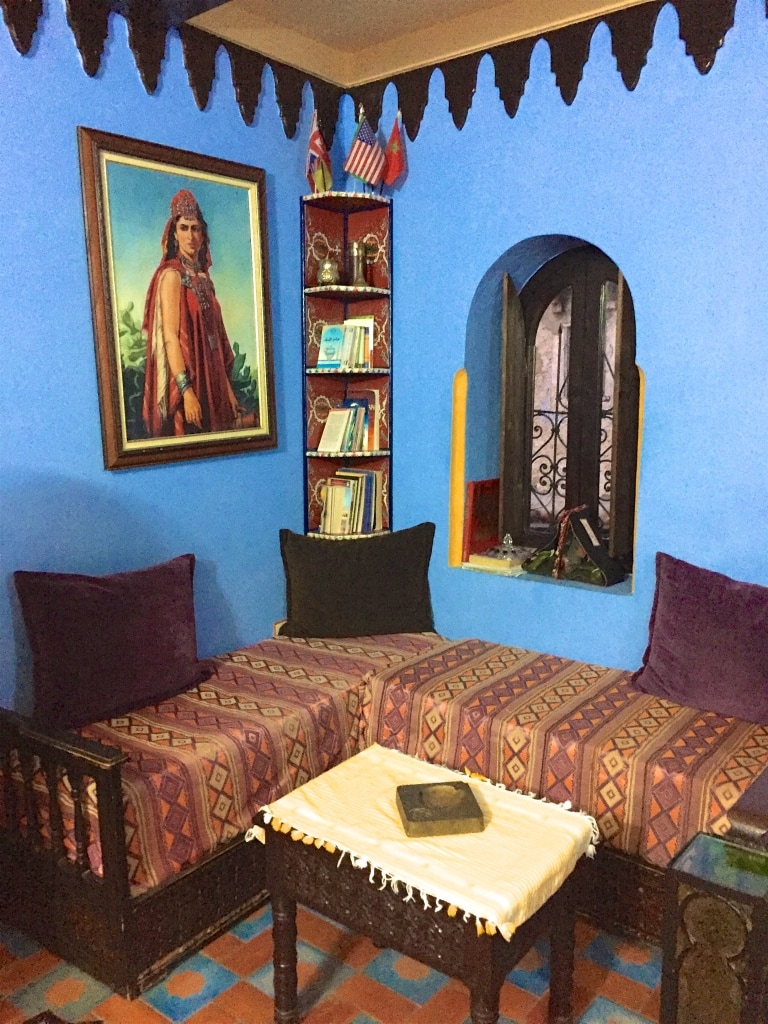 Like the rest of Morocco, you could find any range of accommodation from low-budget guesthouses to luxury hotels. There are about 200 scattered throughout town. We decided on Dar Zman, a lower budget yet cozy guesthouse, which I would return to and highly recommend. It cost approximately $25 a night for our own room, which heater and hot shower. Each room was uniquely and beautifully decorated in Moorish design/architecture. Breakfast and snacks are included on the top floor overlooking the city.

Is there a Nightlife in Chefchaouen? 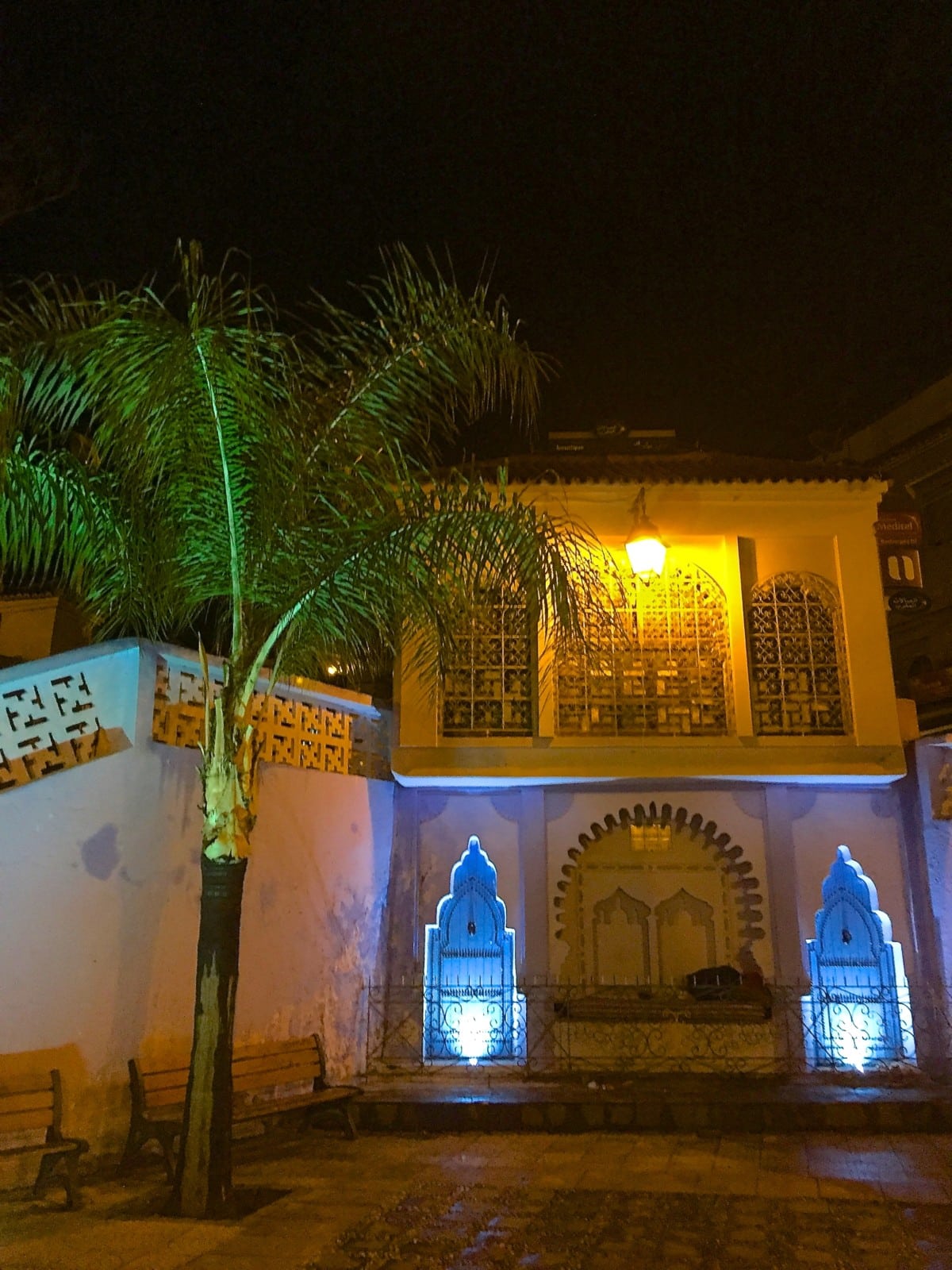 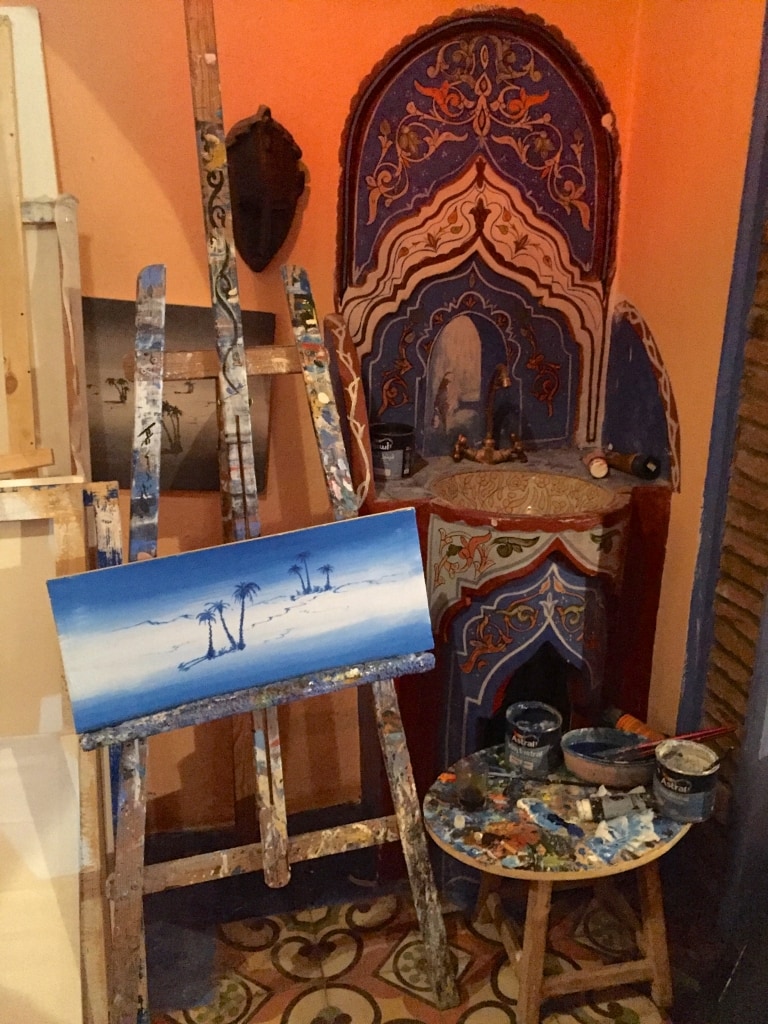 Chefchaouen doesn’t have the bustling nightlife as the big cities of Marrakech or Casablanca. People who come here come to chill, and as mentioned above, to smoke hash. That is not to dissuade you if you don’t smoke. It’s the perfect mountain town to getaway from all the noise, traffic, chaos and crowdedness of the other major Moroccan cities. For night owls, you will be able to find a few cafés serving Shisha or hotels for cocktails. 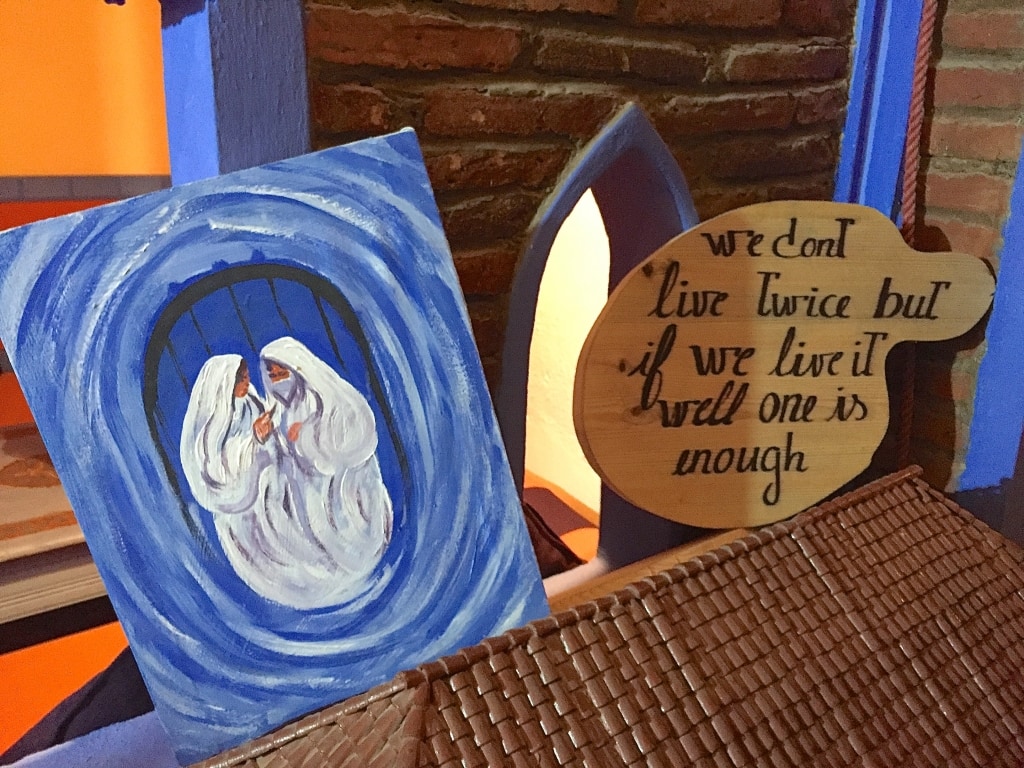 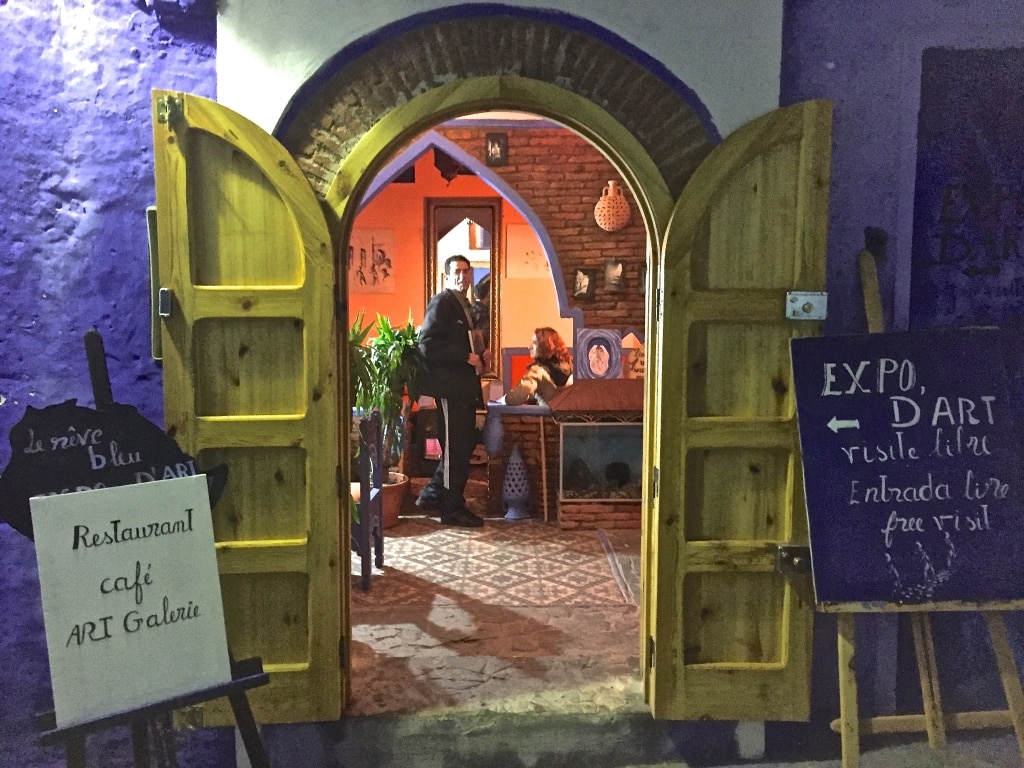 As we wandered through the random alleys, we luckily stumbled across this eclectic art gallery in the Medina called La Rêve Bleu. The owner of the gallery, Mohsine Ngadi, is an artist who’s painted hundreds of pieces that he sells. Besides an art gallery, its a local hangout for travelers and artists. He has a fully operated kitchen which he offers cooking classes during the week, a tea bar and a comfortable lounge to chill late into the night. Mohsine has lived here for an incredibly long time and can be a good source of a Chefchaouen travel guide for you.