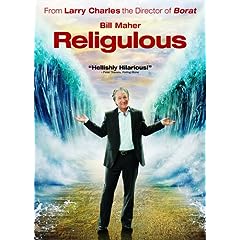 “Religulous” is a combination of the words ‘Religion’ & ‘Ridiculous’. It’s not scripted, nor is it much of a documentary, as it is simply a compilation of interviews with religious individuals. Those interviewed tend to be of the more extreme though. From the same director as Borat, Larry Charles (staff writer of Seinfeld) delivers an in-your-face perspective and reality of the way human beings have twisted ‘religion’.

This movie will definitely insult those that are religious, and those that find faith enough for reason. Although I thoroughly enjoyed watching the movie, I was hanging off the edge of my seat feeling a bit nervous. I felt that he was intrusive to his interviewees. I see the point he was trying to get across which was to broaden the minds of those that leave no doubt of their faith, to step outside and really question. But that is where it’s nearly impossible. Those of a faith find it a sin to challenge their God’s existence or teachings (as stated in most of their texts), and therefore, stay in the shadow and abide by what’s been taught. What happens when the interviewer is too intrusive is that the other person will stand on the defense line, and instead of changing their thought, they will be even more protective and stand behind it, fighting every bit they can.

The majority of  the film is based around the US on Christianity. He is also in Netherlands & England. Interviews include Iranian Gay Muslims, Rabbis, a guy who claims he’s a descendant of Jesus (the 2nd coming, with over 100,000 followers), ex-Mormons, an “ex-homosexual” who is now extremely ‘Christian’ and leads a self-help clinic for those that want to do the same.. etc.

I was impressed that Bill Maher had incredible knowledge of the Bible text, as well as the other religious scriptures. And I do find that in a lot of Agnostic individuals I’ve discussed religion with. They sometimes have read more religious texts than those that claim to belong to a faith. And in this movie, you will see it.

I do have the same views that Bill Maher has on Religion & God. The theme is ‘doubt’. And we will not claim that we are atheists, because that leaves no room for doubt that God does exist. The simply “I dont know” was what he was trying to preach.

Regardless of my beliefs, I do see religion in both positive & negative light equally as important to our human existence. Religion is necessary and has worked for millenniums in that it instills the moral values of what is right and wrong. Non-religious individuals have the same morals taught, but their consequence is a matter of instances in this life time, versus those who are religious have a consequence that comes in an afterlife which is eternal. Although many of them believe that they may sin all they want, and be cleansed of it once they attend confession, church or praying. And along with that is the family values, the longing to belong and feel unified, the perseverance of cultural lineage… and so much more. I don’t discredit religion, nor wish it harm, as they say ‘to each it’s own’. But the question I, personally, impose on religion is:

—Have you thought deeply if you would be of that religion if you were not born into it?
I find religion to be extremely Demographic. Why is it that each nation has it’s dominant religion, typically 90% or more of their people following it? US being mainly Christian, India being Hindu, Italy being Catholic, Iraq being Muslim? There are other factors to go into that, such as racial/religious genocide, etc, but the major factor seems to be that people comfortably follow into what they were born into. Religion intersects with Culture, which intersects with History, and without it, humans would all exist as robots in this 21st century Technology scheme. Which is a whole culture in itself, a whole different conversation later. And yes, religious conversion does occur, but how often statistically have you seen it happen? and last?

My Conclusion to this blog, is that there is no answer to Religion, and that it is and will always be a contradiction.

[ Watch interviews with Bill Maher on You Tube about this movie ]