This post is about the story of a solo female traveler in India, during her 3 days in Varanasi. Meeting new friends. Searching for hotels during Varanasi’s busiest season. The things to do, where to eat and how to enjoy your time in India’s holiest city.

The flight from Trivandrum to Varanasi (with a stop in Delhi) took about 6 hours. Outside of the airport, I waited in the long pre-paid Taxi line. Pretty much every tourist arriving in Varanasi would be going to the same area along the famous holy Ganges River. In front of me were 2 straight-edged looking European guys, who I felt I could trust, so I asked if they wanted to share a taxi to town. As a solo female traveler in India (and anywhere else in the world), you have to make quick wise judgements off the bat of who you can or cannot trust. You may not always be right, but oftentimes, your instincts may lead you to a better direction than not.

After a 45 minute drive into town, the 1 mile road leading to the hotels were closed off to cars. So we got 2 tricycle Rickshaws to take us in. The two guys I had quickly befriended on our drive over are from France who went to college together. One is a scientist and also in a Rock Band, currently living in London. The other is a Journalist in France. They had booked a hotel at Hotel Alka but when they got there, found that they had overbooked. This type of disorganization and chaos happens often in India. And the main response is just a helpless shrug from the reception desk.

From the time we got off the rickshaw from the taxi, a local man (tout-like) had guided us to the hotel telling us that his hotel was better. We brushed him off for awhile but he was diligent. After failing to get a room at Hotel Alka, we gave in to him and said we would go a hotel he suggested, Puja Guesthouse. That was also fully booked right when we got there as November to February is typically Varanasi’s highest Tourist Season. We desperately began to phone every hotel listed on our lonely planet books, trying to find a room before sundown. All Booked!

Schindia Guesthouse: Budget Hotel in Varanasi
with the Best View of the Ganges

As the man continually and enthusiastically followed us to each hotel, we finally found guesthouse which had only one room. It would be a larger room with a balcony overlooking the Ganges River for 1000 rupees (25$) at Schindia Guest House. With that conclusion of one room and 3 strangers desperately looking for a place to stay, we looked at each other and thought, how do we make this fair? The gentlemen suggested I take the room, but I offered to just share it. Yes it sounds risky and unconventional, but I treated this guesthouse more like a hostel situation than anything.

There are certain instances in life where you meet strangers and trust their sincerity. I felt this way about Marc and Jean-Pierre. Obviously our instincts won’t always be valid, as there are tricky con artists that have ruined lives. But in the case with them, I felt that they were pure and that everything would be okay.

The balcony at Schindia is shared with others on the same floor. The room was rather large with added pull-out beds. We were on the 4th floor and the view of the Ganges is simply breathtaking. The hotel manager informed us to keep the balcony doors closed or else monkeys would pay us a visit inside the room. 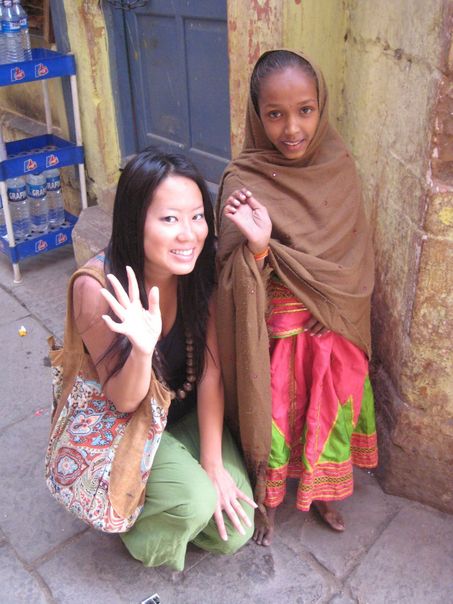 I woke up around 7 am this morning. Overlooking the Varanasi ghat, our view from Schindia Guesthouse is simply phenomenal. The only thing that can enhance this experience is if we were in a 4-5 star hotel instead of a shared guesthouse. But I am not complaining one bit. I love the backpacker life.

We quickly got ready and had breakfast at Hotel Alka. I had potato paratha and cheese paratha and a teapot of chai, pretty much my daily breakfast ritual.

There are several things to see and do but the main attraction is the Varanasi ghat. We roamed from one end of the ghat to the other as we witnessed countless funeral processions throughout the day. Varanasi is one of the poorest places I’ve witnessed in all of India. Considering it’s in the state of Uttar Pradesh, which has been ranked among the lowest in education levels, literacy and poverty.

There are many beggar children that ran up to us, but not as much as I had imagined. The dilemma of travelers is that at times you feel incredibly pitiful for them and start handing out rupees. Other times you get immune to it and ignore them. One little boy followed us a great distance, crying (a fake cry for sure). The moment Sylvan gave him his remaining coke, the boy stopped crying completely. We have been advised in India and with beggars around the world that it’s best you don’t give them any money. Most are controlled by pimps and in some worse scenarios, trafficked or even kidnapped for beggar work.

Varanasi is one of the most popular tourist attractions in India for international travelers as well as Indians in general. With extreme poverty, the local economy is dependent primarily on tourism. Many locals are out to extort as much money out of tourists as possible. For example, we had one guy approach us and offer us a free tour. We kept resisting him and he continually said he wanted no money from us. He lead us up to a balcony of an ancient building (there are many of these buildings) to see a closer view of a funeral procession. He explained that there were 3 different areas for burning Ghats in Varanasi separated by the 3 main castes.

Learning More about the Varanasi Ghat

The high caste, he said, is estimated to be around $500 for sandalwood wood which requires about 200 pieces of wood.  We learned that females are not allowed at the cremation area, because they tend to cry. And if people cry around the ghat, the soul of the dead body will catch that and not be able to be released to Nirvana.

We also learned about another building where old, poor individuals without families go to stay until their death. On our way out of the building, an old lady asked us for money to donate to her wood. Of course everything came with a price. We gave her some money. She begged for more. We gave more and then left. People are incredibly aggressive in Varanasi, more than most places in India. It’s common for beggars to push products and themselves onto you saying no charge, and then afterwards asking for money.

After our walk, we took a rickshaw for 30 rupees (75 cents) to the famous Monkey Temple of Varanasi. On the way to the temple was a quarter mile of path with monkeys just freely flowing around.. many were cleaning each other of flees.. as nurturing as humans.. when we reached the temple, we were not allowed in because we were not Hindu..

Note: Babies, cows, and some who cannot afford the processions do not qualify for an actual ceremony so some end up dead near the Ghat. We saw a dead cow just floating in the river.

Unfortunately the boats were on strike so we couldn’t do a tour. But to be honest, we weren’t so keen on going. It’s not very appetizing to tour through the Varanasi ghat with the combination of body ashes, dead cows, people showering and defecation. I do love the vibe and spirituality of Varanasi. It’s ancient, spiritual, unique and very traditional. The sights of women on one end bathing with men on the other. People going about their day to day along the Varanasi ghat: brushing their teeth, shampooing in the river, kids playing cricket, and people doing their laundry.

We took a bike rickshaw back to the Varanasi Ghat area. We visited Kashi Vishwanth, also known as the Golden Temple, just 3 miles away with hundreds of guards outside. Now we are at Sharantha Restaurant enjoying our rooftop view. You can never get sick of gazing out to the spiritual Ganges River.

At Peace in Varanasi

For dinner, we went to the Shanti Guesthouse Restaurant. By now, we’ve become great friends. We shared some Kingfisher Beers. Tomorrow we will buy a bottle of whiskey and roam along the River front and watch the Ghats. We wanted to do a Boat Tour of the Ganges but unfortunately, they are on strike. Which seems to happen quite often.

The more days I’m abroad, living this unconventional life at 23 years old, the more I want to continue life as a solo female traveler in India. I can do this dharma bum thing for a few months. But to be practical, I better get back before I abandon my life in LA for a life on the India to Southeast Asia backpacker circuit!

Varanasi is the India that I had been longing to see. Narrow streets, all human senses engaged, holiness of the Ganges, chaos between the locals and tourists, spirituality mixed with some sham Sadhus. The reason we had to get off the tricycle rickshaw when we got near the river was because it wouldn’t fit through the narrow alleys. Homes in Varanasi are stacked on top of one another due to overcrowding (population of over 1.3 million people), compact spacing and extreme poverty. Cows, goats, dogs, beggar children and elders, dead bodies, workers and shop keepers live amongst one another. Ghats along the rivers. Burning corpse 24/7. pilgrims on a once in a lifetime spiritual journey. Varanasi is incredibly sacred. An ancient city with so much culture, history and spirituality.

Is Varanasi Safe for Female Travelers?

Of all the cities I’ve been in India, I would rank Varanasi as one of the less safe places. I recommend always watching your belongings. Either hold your purse tight, or wear a money belt. Avoid walking alone at night and preferably with male companion or even better, a local trusted tour guide. With its popularity in Tourism, there are many shady schemes going on. Anywhere from overcharging tourists. Always negotiate to a fair price (do your research and ask your hotel how much services, boats, rickshaws, taxis and tour guides should cost). Children and locals may befriend you outright saying that they don’t want money. And then begin to follow you for a distance and then beg or demand money.

Read More on Travelling in India: