As we approach International Women’s Day in 2 weeks, Girl Rising, a non-profit behind the global initiative to educate and empower females, debuts another powerful short film called “Brave Girl Rising”. The opening premiere will be on March 8, 2019. The film is made in collaboration with the International Rescue Committee and filmed in one of the largest refugee camps in the world. “Brave Girl Rising” tells how a courageous girl named Nasro was inspired by the magical dreams of her mother and the sisterhood of her friends, succeeds in getting the education she deserves.

“At a moment when 68.5 million people are displaced worldwide,
around half of whom are women,
this film brings much-needed awareness to the challenges faced by women and girls in crisis”,
said Nicole Behnam, Senior Director for Violence Prevention and Response at the IRC.
“Campaigns like this ensure the most vulnerable women are part of the global conversation,
and show the importance of prioritizing their safety, education and wellbeing.
The IRC is proud to support and empower girls like Nasro around the world,
so that they can recover from violence and take control of their lives.” 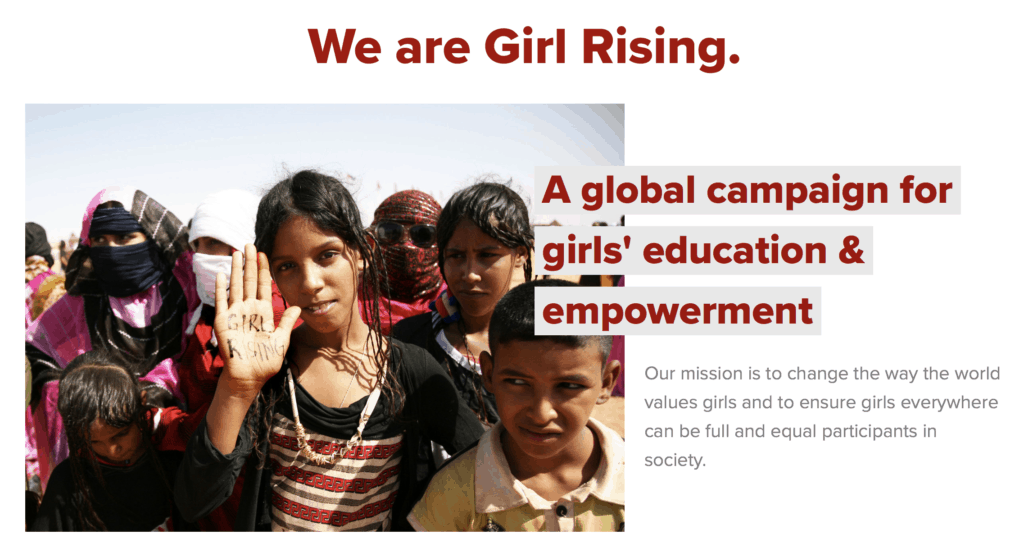 One Girl with Courage Can Change the World 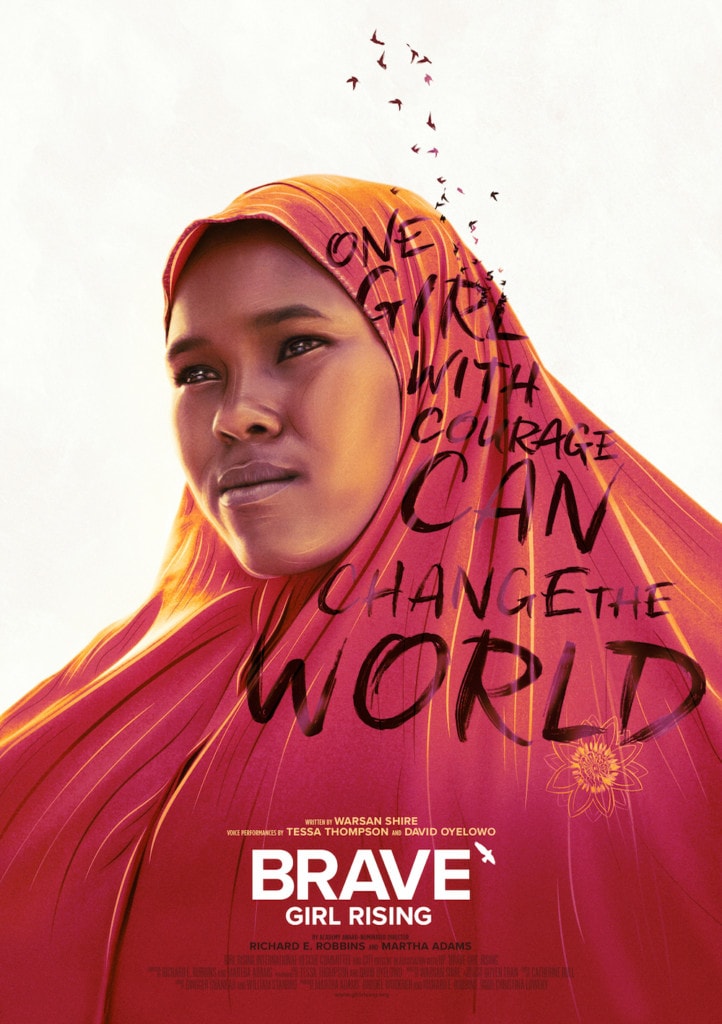 “We want to get people talking about the reality for refugee girls all over the globe,
the barriers they face in securing basic human rights and the truly transformative power of education for girls living as refugees”, said Christina Lowery, CEO of GR.
“We believe films like ours can turn bystanders into activists and we have seen first-hand the results of people who become engaged in the issue and are inspired to act.”

Warsan Shire, the United Kingdom’s former young poet laureate and social media phenom behind Beyoncé’s song “Lemonade”, incorporates elements of magic realism and moving poetry in the screenplay. Tessa Thompson, who narrates and is the voice of the film, is one of Hollywood’s hottest new star. She starred in Creed 2, Westworld and Thor. As one of the founding members of Time’s Up, she is a powerful advocate for women in her own right.

Nasro, the 17 year old girl featured in the film, arrived at Dadaab Refugee Camp when she was only 7 years old. Shire wrote the screenplay based on hours of conversation with Nasro—and the story weaves together true events in Nasro’s life and her dreams with the award-winning poet’s own experience as a refugee.

Brave Girl Rising was made in collaboration with The International Rescue Committee (IRC). Their Women’s Protection and Empowerment programs support Nasro in Dadaab refugee camp, and with support from the project’s Founding Partner, Citi. To coincide with the film’s release, Girl Rising (GR), IRC, and Citi are teaming up with HP and Amplifier to launch a major campaign that will include screening toolkits, curricula, take action guides and a street art initiative. 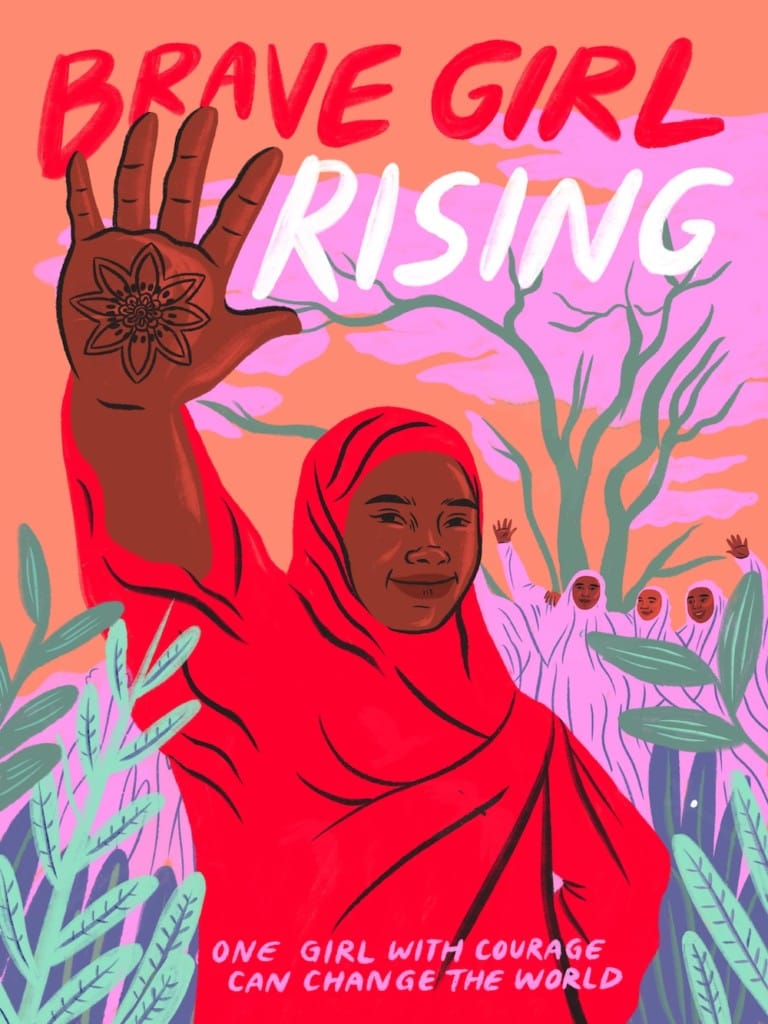 The social change agency, Amplifier, teamed up with Girl Rising to create a street art component of the campaign that will be shared widely on social media. Artist Ashley Lukashevsky will create artwork inspired by the film. The poster will be distributed in limited editions in select cities around the world and online in advance of the film’s release.

This film also marks the expansion of Citi’s partnership with Girl Rising. Citi has been a supporter of GR’s US Educator Program and is proud to be the Founding Partner of this project, the first in a new round of GR films and campaigns.

The IRC is a global leader in providing services and resources to adolescent girls in crisis, to help them regain control over their lives and futures. Through psychosocial support, skills-building activities, mentorship, and other interventions, the IRC engages girls, their parents, caregivers, and community leaders to combat harmful gender norms and practices, including gender-based violence.

Learn more about the work International Rescue Committee does: https://www.rescue.org

“This film is shining a light on the personal struggles and experiences of one refugee, which reflect that of many worldwide,” said Ed Skyler, Citi’s Executive Vice President of Global Public Affairs. “Citi is proud to support the work of GR to bring this awareness and action in support of girls and gender equality, while also continuing to partner with IRC and others to come up with solutions to this challenging issue.”

Girl Rising launched its global campaign in 2012 with the goal of changing how people value and invest in girls and their potential. Since then, GR has created media-driven campaigns and grassroots programming with on-the-ground partners. Countries include India, Nigeria, Pakistan, Thailand, and the Democratic Republic of the Congo. Soon, Girl Rising’s initiatives will be expanding into Kenya and Guatemala. Through creative storytelling in the form of films, PSAs, social media campaigns, radio programming, mobile games, and by teaming up with local organizations, GR is reaching girls, boys, parents, teachers, community and government leaders, sparking conversation and locally-led action in support of girls’ education and girls’ rights.

Around the world, girls face barriers to education that boys do not. But educating girls can break cycles of poverty in just one generation.

These statistics were provided by Girl Rising updated March 2018.

Girl Rising works to get Girls in Schools because

Suggested Reading List on the realities, horror and lives of girls around the world here.