Traveling in general can be intimidating, especially when it comes to cost. Certain destinations will allow you to get more bang for your buck, allowing you to travel longer for less. Destinations like Europe have the reputation of being more costly, therefore more intimidating. With the Euro being almost at par with the US Dollar – currently at 1 euro to 1.18 USD, traveling in Europe has become a lot more affordable. Many are shocked to hear that flights typically cost $20-30 within Europe (at minimum, half the cost than American flights if not more) with budget airlines such as RyanAir, EasyJet, Vueling, Iberia, Aer Lingus and etc. Recently, I found the cheapest flights between France and Spain for 9 euros on Volotea, a newer budget airline headquartered in Barcelona. 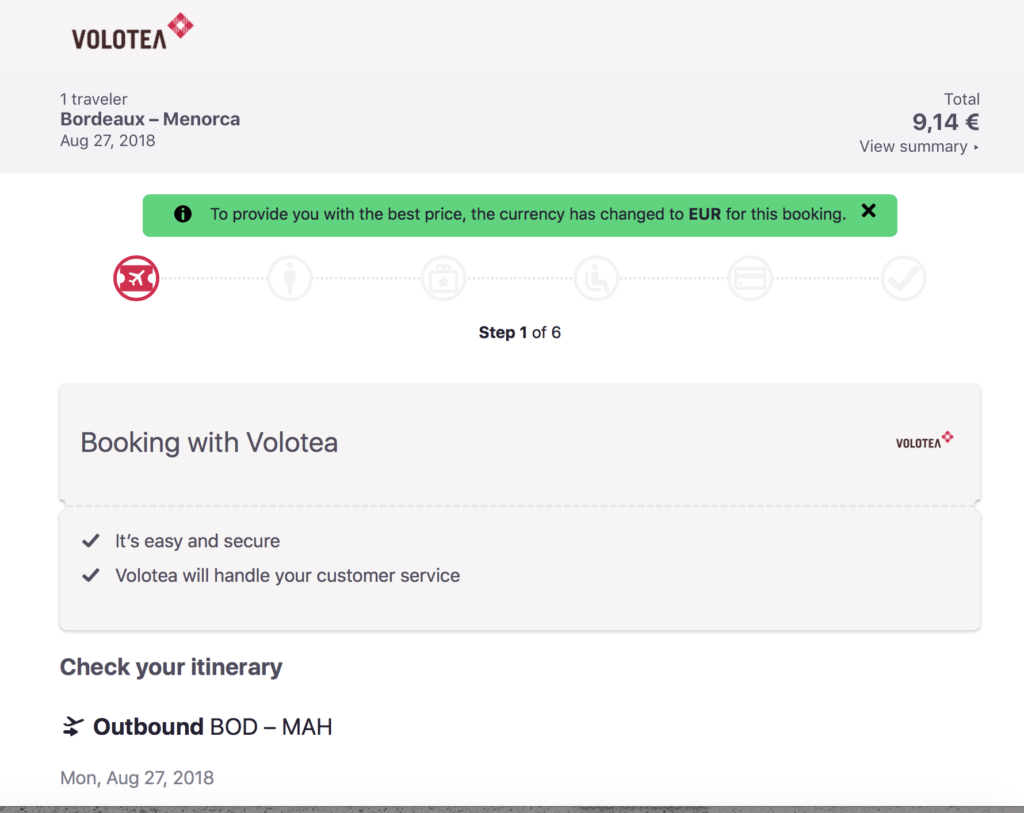 Start at Skyscanner or your Trusted Airline Site

Through your preferred third-party travel website, put in your Departure / Arrival destination. Then click “SHOW WHOLE MONTH” to see the cheapest rates if your dates are flexible. Once you find the flight you want, go directly to the airline website to see if you can find the flight for the same price. It’s always best to book directly from the source for more control (on modifying, questions or airline points). Sometimes, the budget flights don’t show up on the third-party websites so it’s smart to check both when doing your research. 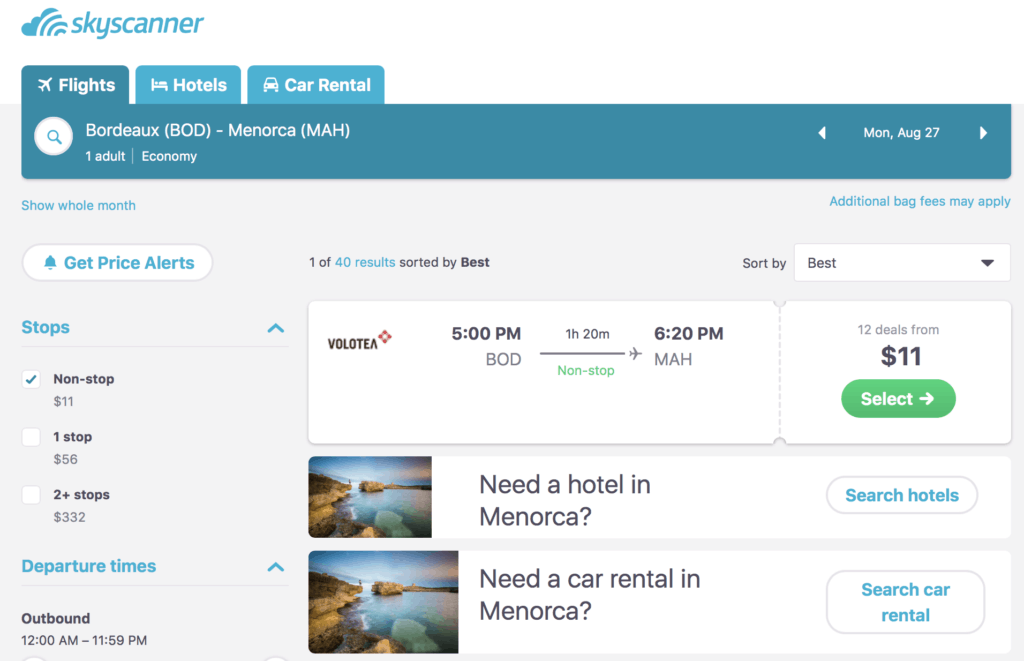 Cheapest Flights between France and Spain

In general, booking flights to less frequented places would cost more, such as the case to Menorca (a smaller, secluded island in Spain). But Volotea and other budget airlines have mastered the art of practical, inexpensive, non-stop flights within Europe for rock bottom prices. Even cheaper than taking a train or taxi in many cases. As I browsed through Skyscanner, I found a non-stop (1 hour 15 minute) flight for 9 Euros (or $11 USD) on a Monday late afternoon from Bordeaux to Menorca! WOWZA! Since our plans weren’t finalized on which day we would leave to Menorca, I booked it immediately. Because even if I had to cancel, it’s really not a big deal to lose it. 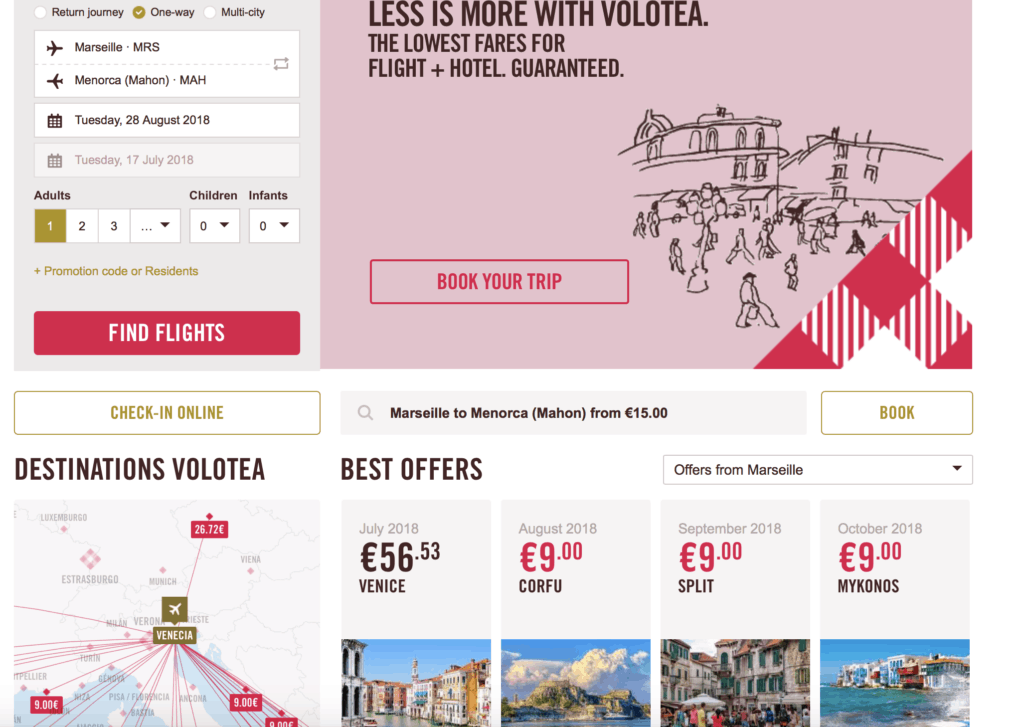 The truth is is that I waited until I actually completed the flight before publishing this post to make sure everything goes well. Because one can’t help but be skeptical with a $11 flight right? And to my delightful surprise, everything went so smoothly.

“The European Open-Skies Treaty of 1992 blew the lid off the system in place before, where national government would restrict access to their airspace to expensive ‘flag-carriers’, such as British Airways or Lufthansa. This enabled airlines to fly anywhere they wished in the European Union without government approval.”

Budget Airlines has been a common thing in Europe for almost 3 decades. European leisure and business travelers are use to it as a trusted way of quick, no-brainer transport. There are over 60 budget airlines in Europe today and counting.

America has Budget Airlines too

The equivalent in the US is Spirit Airlines which still needs improvement, but the concept is the same. Provide a mode of flight transportation at the very basic level – a seat on the plane. Anything additional will be at an additional cost – choosing seats, luggage, water, beverage, food. And rightfully so, when your flight seat start at $25-30 each. While I hear endless complaints from Americans about this (but are you surprised?), I remind them to look at the bigger picture and to add up the cost. Compare and contrast pricing and then decide which flight is best suited for you. 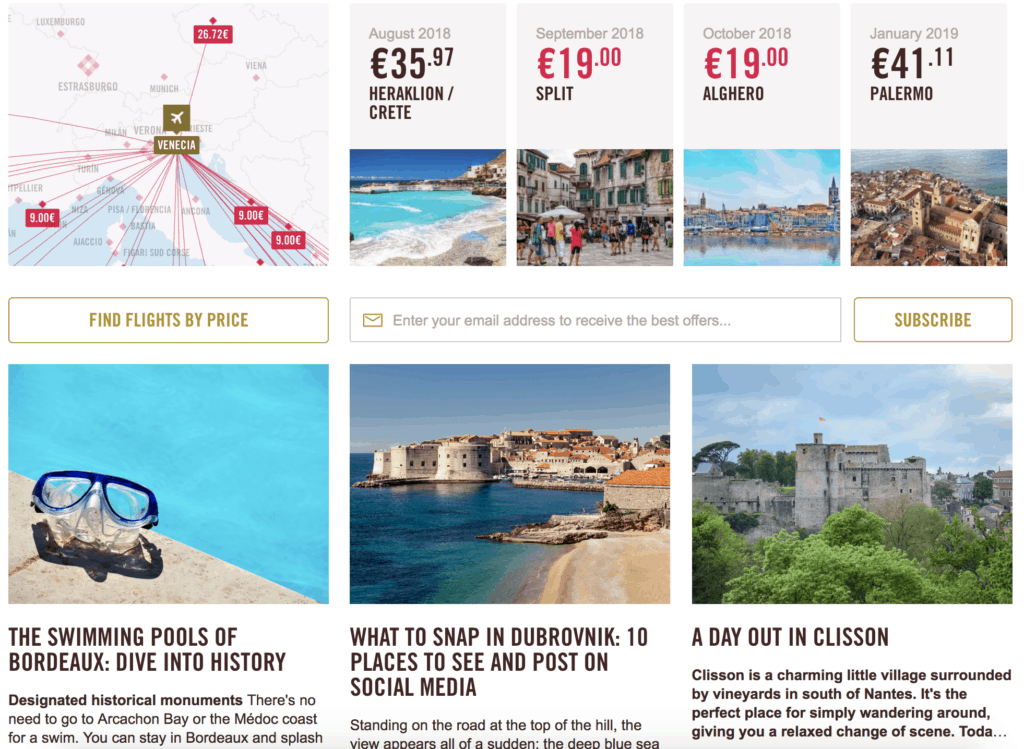 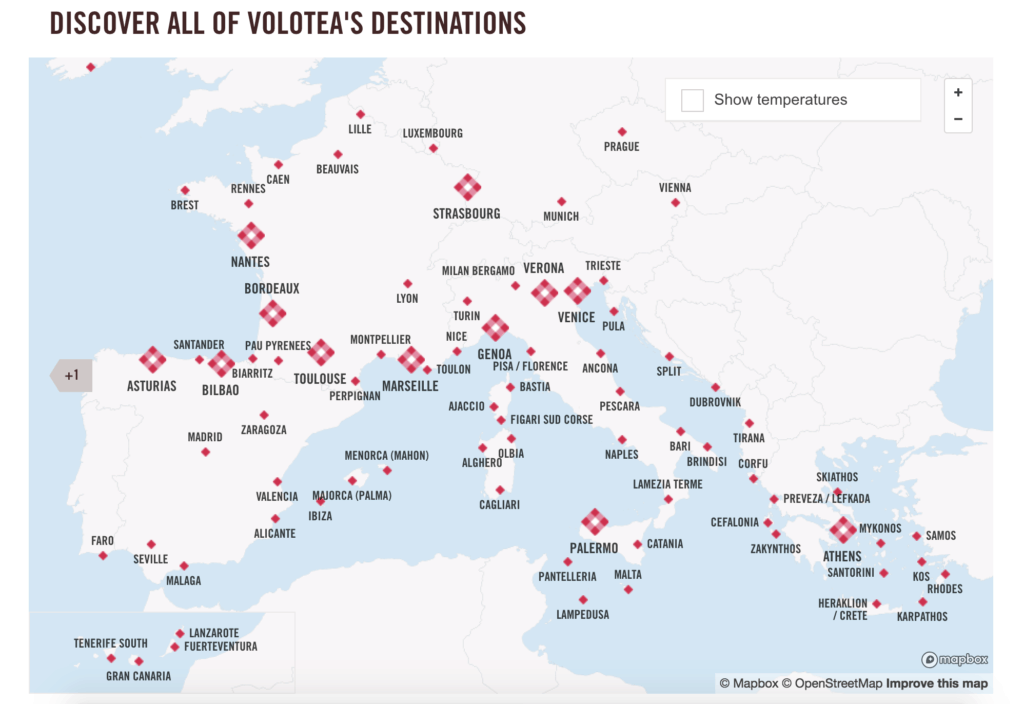 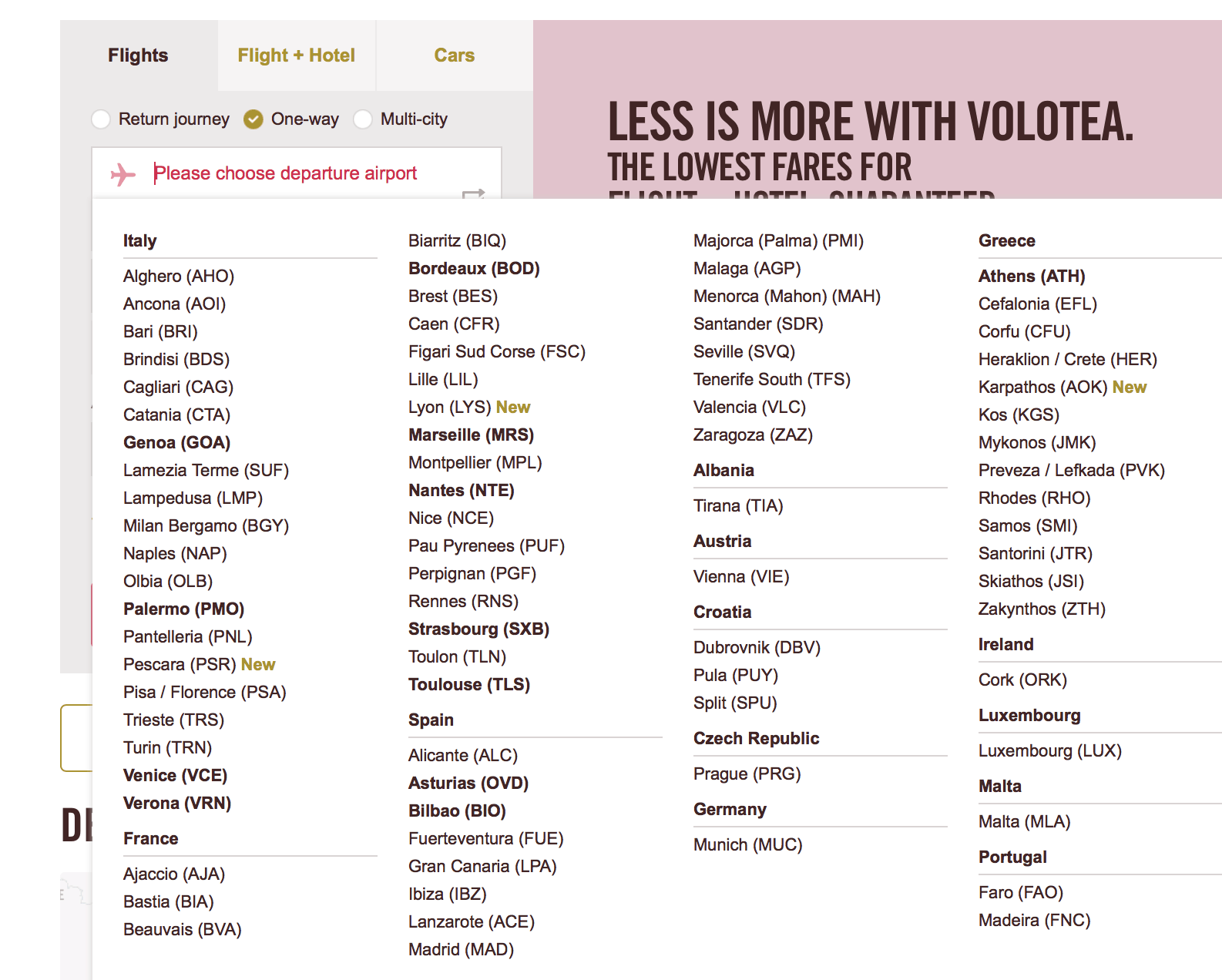 Volotea was founded by Carlos Muñoz and Lázaro Ros; the CEO and managing director. Respectively, whose first venture together was Vueling Airlines, at present, the third budget airline in Europe by passenger volume.

Its management team is made up by professionals with an extensive experience in the aviation sector in Spain and Europe.

Think you may fly often? See if joining MegaVolotea, MegaVolotea Plus is worth it for just 49.99 euros a year. Up to 10 euros off a booking, 20 euros credit given on your birthday, up to 25% discounted seats and discounted luggage up to 15% off.  (Or any of the budget airline VIP clubs) 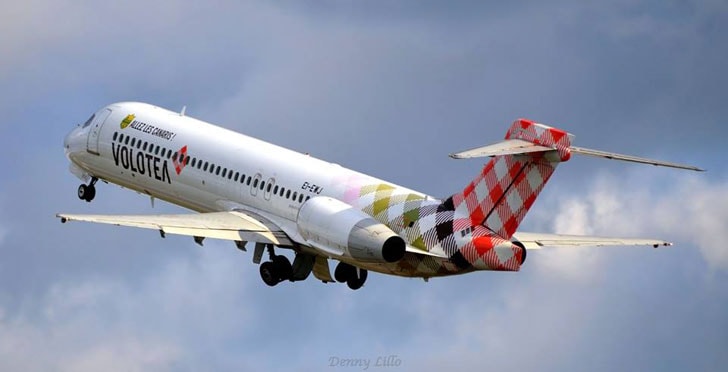 Roundtrip flights to Europe start as low as $300 roundtrip ($150 each way) on International Budget Airlines such as Wow Air and Norweigan Air. I think it’s fair to say that anyone can afford to travel right now if they prioritize it. Once in Europe, meals and day-to-day costs about the same. Of course it varies depending on where you dine and which countries you are in. Rooms on Airbnb can be rented at starting $25 a night or Hostels for even cheaper.

The best and most affordable part of traveling within Europe though is definitely the cost of public transportation, trains/metros and FLIGHTS! Considering the fact that travelers can find cheap flights within Europe starting at 5 euros, there’s really no excuse on why you can’t save some money and book your next trip!

6 thoughts on “Flights within Europe Starting at $6”