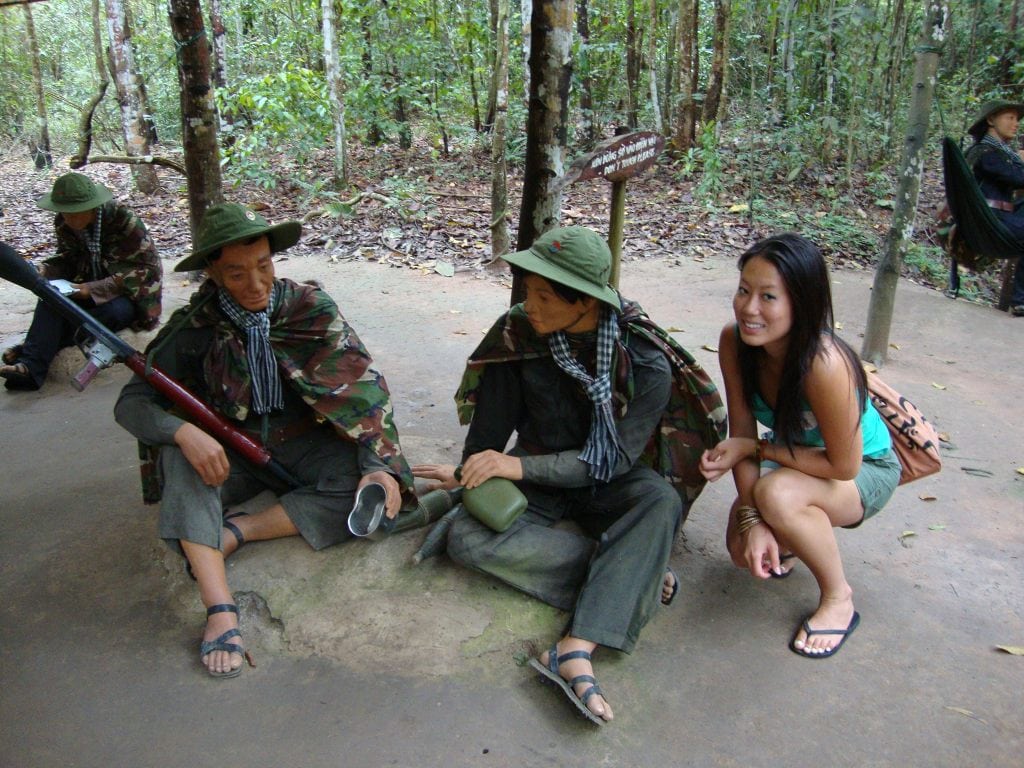 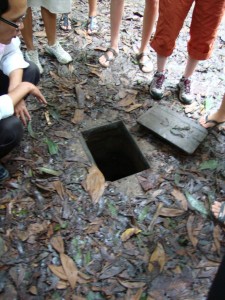 Today we met in front of the hotel at 7 for the half day tour to the Cu Chi Tunnels. The tunnels dug in the 1960s by the Vietnamese to hide from the US Soldiers during the Vietnam War. The tunnels once stretched out all the way to the border of Cambodia! Basically an underground life with markets and homes. People digging way to friends they wanted to connected to. We were lead by a silly witty tour guide who we paid $5 to pick us up in a bus with other young individuals. The first tour bus I’ve had since I traveled as a child w my parents! I quote him, while describing all the bloodshed of wars in Vietnam, “Every country wants to become a Superpower. Well if you want to become a superpower, you come attack Vietnam. US, France, Japan, Mongolia, China..” Sad Reality. But very clever & true! 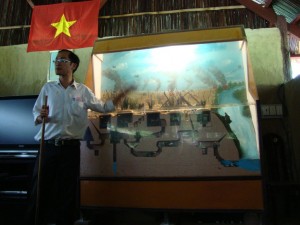 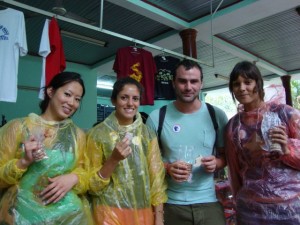 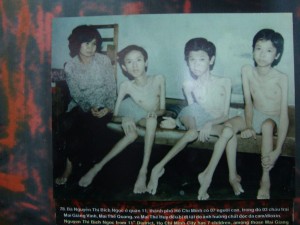 Before we got to the tunnels we stopped by a factory shop selling souvenirs. The people working at the factory there were all handicap from the Dioxin (toxin) – Agent Orange that the US used on these villages, thinking they were killing the Viet Cong (communists). Regardless if there were communists residing in these areas, there was still children and innocent lives. Where you were born shouldn’t determine whether or not you will live. The poisonous Agent Orange lead these people to be born handicap and physically deformed. And now, they are spending their days in a factory to make petty products to sell to tourists (a good amount to Americans). What a shame. 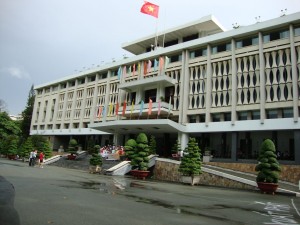 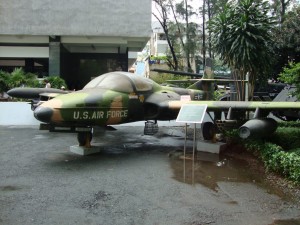 After the tunnels and learning the history of Vietnam from their side, we went to the Re-Unification Palace in Ho Chi Minh city. Then to the War Museum. Wow. Shocking. Even more than the Teul Slung Museum in Cambodia on the killings of Khmer Rouge. The whole museum, 3 floors were filled with photos of dead babies, dead women, dead soldiers, deformed children/adults now due to the toxins we once splattered, US tanks that killed so many Vietnamese, quotes of American soldiers, things US did. Basically it was a museum dedicated to the damage US had done to Vietnam. These are things we did not learn in our American text books. Yes we briefly learned that this event happened, perhaps on a chapter in 3rd grade of our Social Studies book, but no more details than that. Whatever the reason US had for war, is NOT okay.

War is NOT the Answer!

MY SE ASIA trip started as a vacation away from home, to a gluttonous travel food sensation, to the reality of War (in Cambodia, Vietnam, Myanmar). And that’s just 3/4 countries I visited in 1 month. What about Iraq today? In 30 years, I am sure to go to their museum to see the damage we’ve caused to their people.