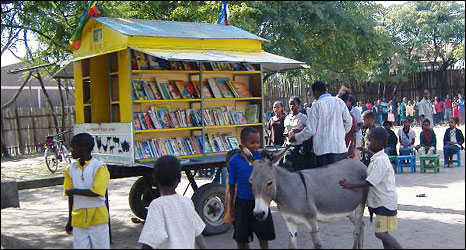 In a bamboo and matting shelter on the edge of the town of Awassa, rows of tiny children are struggling with Ethiopia’s fiendishly complicated Amharic alphabet.

Their teacher is a small boy, scarcely older than they are, but he moves his pointer confidently along the chart showing the 256 different characters, and the children shout back.

Watch a Video of the Kids in Class!

Children being taught the Amharic alphabet

Reading is a real challenge for children here, and not just because of the script.

When they have mastered the basics, what can they practice on?

The range of children’s books published in Amharic is limited, and for many of the children Amharic is not even their first language.

There are seldom any books at home, and often very few at school either.

But these children in Awassa are lucky.

If you leave them practising their letters and walk out through the garden gate, you will find another group of children, clustered under a shady tree, absorbed in their books.

Parked alongside them is a brightly painted wooden cart, with sides which fold down to display the shelves of books.

The two donkeys which pull it are resting in another patch of shade.

This is Ethiopia’s first Donkey Mobile Library – the brainchild of an expatriate Ethiopian now living in the United States.

His Ethiopian Books for Children and Educational Foundation (EBCEF) is also a publishing house and has produced many of the books on the shelves of the cart.

Some children are enjoying the lovely illustrations in the foreign picture books, which the library also carries, but their English is limited or non-existent.

It turns out that everybody’s favourite is the story of Silly Mammo, familiar to generations of Ethiopian children.

Mammo is a well-meaning young man, but very silly. When his mother finally finds him a job, he drops the coins he earns and loses them.

“Next time, put your pay carefully in your pocket,” says his mother.

The following day the farmer, instead of money, pays him with milk, with predictable consequences.

“No, no, no,” says his mother, when she sees his dripping clothes.

“When he gives you something like that, you should carry it on your head,” she says.

But Mammo’s next wages come in the form of fresh butter wrapped in green leaves.

The children giggle delightedly at the drawing of the blazing sun, and the melting butter running down Mammo’s face.

Silly Mammo is the first book that the EBCEF has published in three languages: alongside the pictures are parallel texts in English, Amharic and Sidama – the local language of the region round Awassa.

By mid-afternoon it is time for the mobile library to pack up and move on to its next destination.

The children help pile their stools into the cart and the donkeys are harnessed up between the shafts.

The donkeys are not just a gimmick – in rural Ethiopia and provincial towns like Awassa, horse-drawn buggies and donkey carts are a normal form of transport.

But the project also tries to teach the children about respect for animals.

Alongside them walks the project’s mascot – Queen Helena, the queen of all the donkeys.

She is an old lady now, but is decked out in a red silk saddle cloth, and a red and gold crown.

The donkey cart moves off down the street, surrounded by a swarm of delighted children, and eventually turns into the gate of a local primary school.

More excited children run out to meet it.

Like many state primary schools in Ethiopia, this one has no library of its own.

The staff say the children have made great strides in their learning and in their behaviour since getting regular access to books.

Most are from poor families; for them, even the modestly priced picture books published by EBCEF cost something like two days’ wages.

In the centre of Awassa, and in the Ethiopian capital, Addis Ababa, EBCEF also runs conventional children’s libraries, busy in the late afternoon with school children reading and drawing and doing their homework.

All the children are completely absorbed in what they are doing and treat the books with great care.

Out in the countryside, projects are under way to provide school libraries in villages where there have been none before.

For those children with access to books, the ritual chanting of the alphabet can be just the first step on the path to a lifetime of reading and learning.

For EBCEF’s project manager in Awassa, Mezrasha Kibret, books are the key to everything.

“If we are interested in changing the world,” he says, “then we have to read.”