Late last year, I had the fateful opportunity to meet the lovely Amrita Thadani over some Rosé on a Friday Jazz night at LACMA. Amrita is the founder of an ethical, fair trade and locally branded clothing company which employs refugee women and women of domestic violence. Neococo was founded in Fall 2017 as a way to intertwine Amrita’s fashion background and her strong desire to give back.

Amrita was born and raised on the beautiful beaches of Goa, India. Then, a much sleepier place than what it’s become today as an incredibly popular tourist destination. Though today, you can still find the tranquility in southern Goa when you visit. She was brought up in a boarding school since the age of 5. Though she hated it at first, as most children would, she grew to love and appreciate it in time. Over the years, she made the most valuable relationships and also learnt some very valuable lessons. She learned in boarding school that no matter what one’s religious or personal backgrounds are, we are all here together as one. We have no other choice but to accept each other’s differences and make the right choices for humanity as a hole.

“We were all treated equally in school.
And within that, we found the strength, love and courage to support and cheer for each other.
This, for me, was the biggest lesson learnt.”

As Amrita developed into a young woman, she got her first taste in fashion as a model and later as an assistant photographer. She was always amazed by how print held such power to tell a story. Whether it was in fashion, wildlife or real life events. Amrita took up whatever job she could find in fashion and was particularly drawn towards styling because of its huge role in storytelling. She landed jobs at places like Elle India and also went on to work in print, TV Commercials and movies. These roles helped her gain experience in working with groups of artisans and NGO’s.

Eventually, she moved to NYC and studied at Parsons and The New School of Design. Amrita continued to work as a stylist under many established wardrobe stylists in print, TV Commercials and Music Videos. During her fashion school days, she also gave birth to her beautiful daughter Anaya which gave even more meaning to her life.

Volunteering with Refugee Women and Women of Domestic Violence

During weekends, Amrita spent time volunteering with refugees through resettlement agencies such as the International Rescue Committee (IRC). It was an insight into the lives of women and children that had been on an unpredictable journey. And were now safe in the United States but had lost everything including personal belongings, assets, years of education, family and friends. Starting over for them was not going to be easy. And most importantly, getting a job. Amrita took actions into her own hands and decided to create a product that would help create jobs for the women so that they could work safely from the comfort of their own homes. In addition, help contribute to their families as well as back to society.

During the time that she volunteered with the women refugees, she found that art was a commonly beloved subject among everyone. They also shared a love for sewing and hand embroidery. It was a craft most of the women had learnt to love. Many had fond memories of personal belongings such as bedsheets or pillow covers that were embroidered with their names on it by their moms and grand mothers. They spoke about its timeless, eternal factor. Amrita was drawn to how similar in tradition and culture her upbringing in India was compared to theirs coming from the Middle-East, Asia and Central America. Even though they all had different religious or geographical backgrounds. It took her back to the days in boarding school when kids were kids, despite differences in backgrounds. Just as people are people, no matter where they come from. 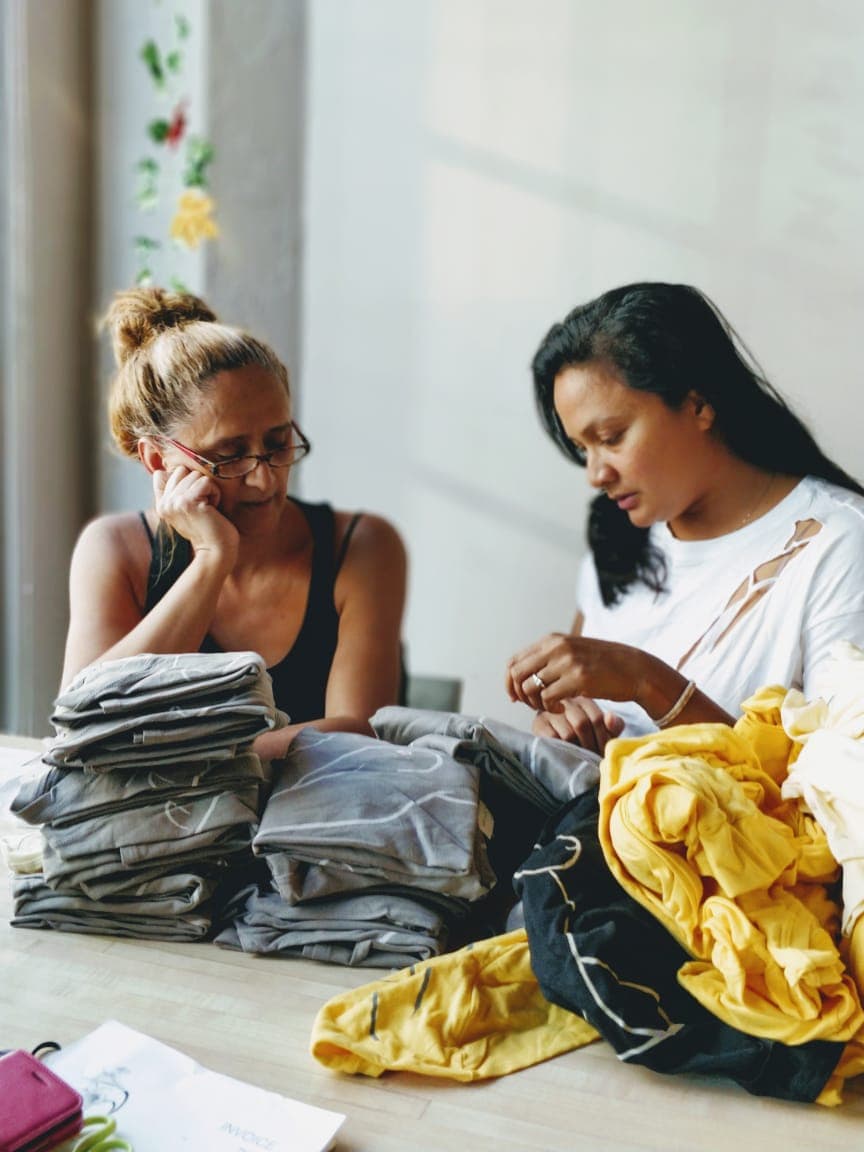 Neococo: An Ethical Brand of Clothing by Refugee Women 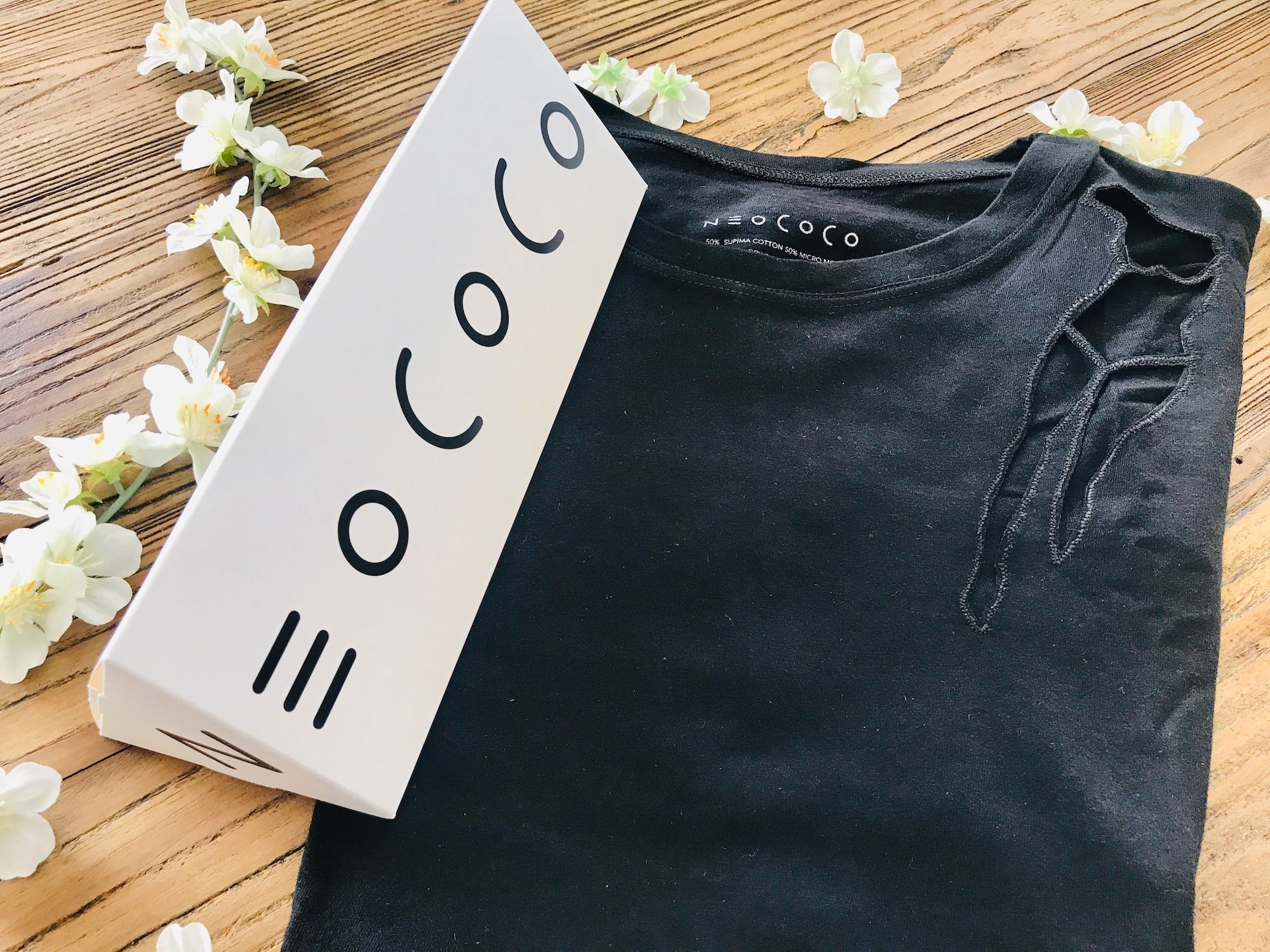 In the Fall of 2017, the Neococo brand was born in Los Angeles with its primary product: clothing by refugee women. Amrita has also partnered up with homeless and domestic violence shelters in Downtown LA, such as the Downtown Women Center to employ women in need of work. Today, she successfully employs 8 women full time who embroider from the comfort of their own home. She attunes the logistics for each individual to work past their challenges in regards to transportation, hours, skill levels, language and inhibitions. Amrita also meets them once or twice a week to review the products and also talk about resettlement, family, kids and their future goals.

The women come from all over the world: Syria, Iraq, Iran, Japan and Mexico. Read about their bios here.

Neococo’s brand consists of 22 uniquely embroidered t-shirts and long sleeve sweaters for now. All the fabrics used at Neococo are sourced locally in Los Angeles. They have long-lasting relationships with the mills and factories that they have worked with, all in downtown Los Angeles, which gives them complete control over the quality.

Embroidered Artwork that tells the Story of Women

The artwork design was created by Amrita. Mainly silhouettes of the female body which can be seen as provocative to some. So naturally, the t-shirts are oftentimes a conversation starter which she loves. Because it brings awareness through conversation and story telling about the vulnerability of the women and their journey. The objective is to share that there is nothing to be ashamed of when it comes to the female body. It is the same body that gives life.

Amrita hopes to one day own her storefront space. A place where they can sell merchandise and have the ladies involved in the selling process (and the logistics of it all). Amrita believes that a community is only as strong and successful as the people living in it. 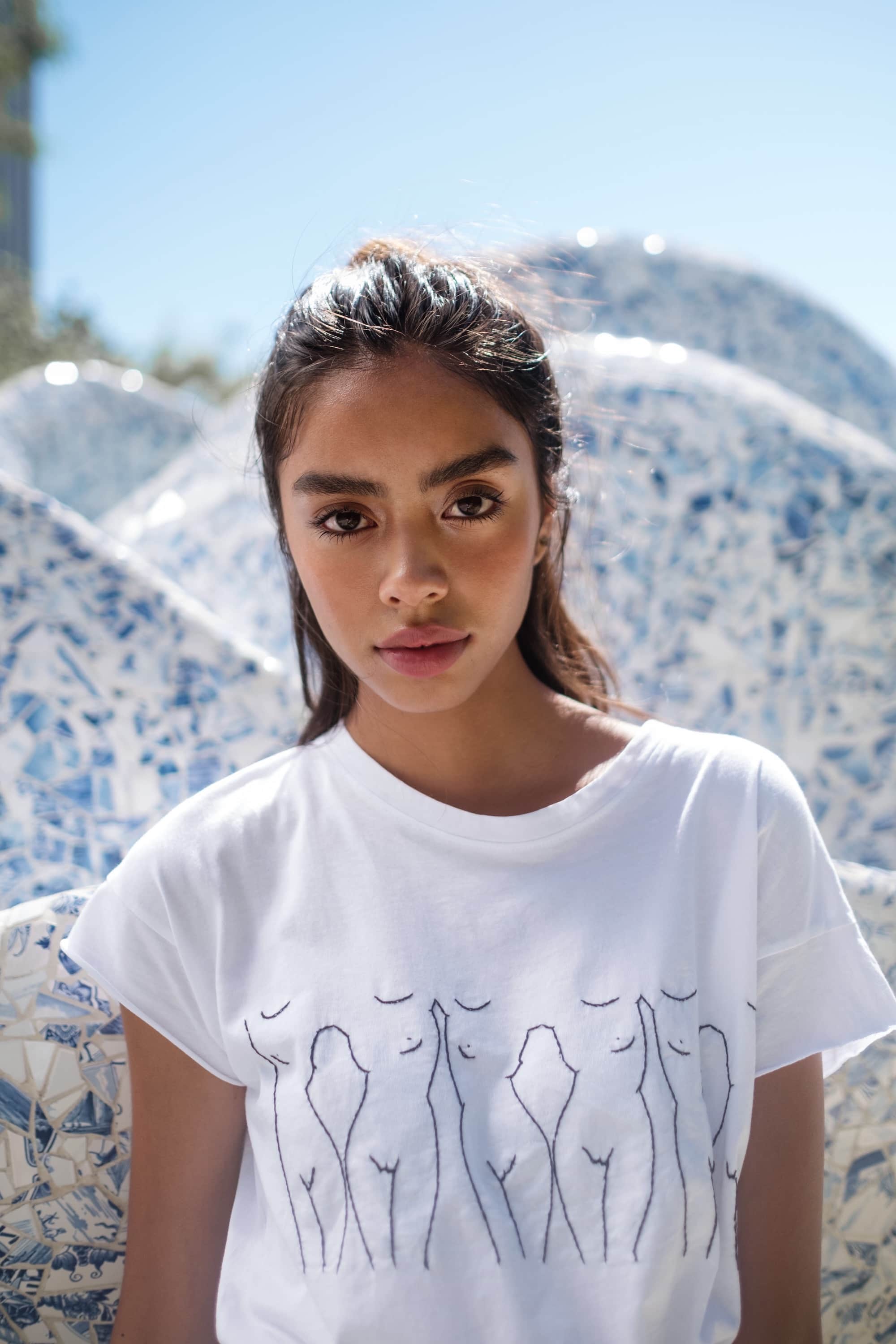 “Every hand embroidered t-shirt is a representation of the woman who embroiders it.
Giving her back independence and dignity.
Re-energizing the timeless craft of hand embroidery,
Every t-shirt is symbolic of women expressing freedom-transcending issues of conflict,
abuse and women’s rights.”

Neococo is involved in much more than just creating jobs. The purpose is to encourage women to be involved as a community. Especially in their new town now that they are resettled. To help them be part of events where they get a chance to meet other people, communicate and share their stories, creating awareness. 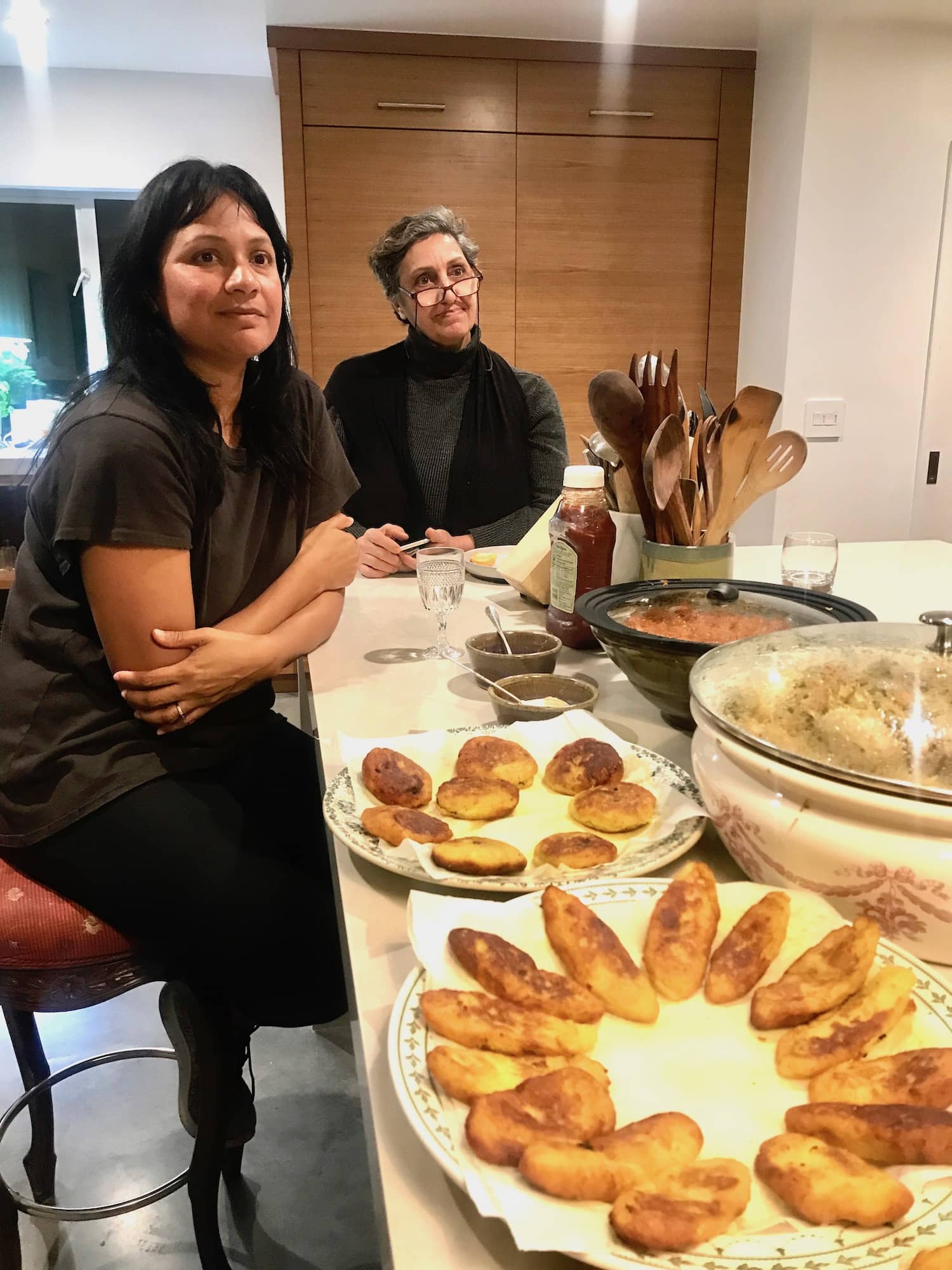 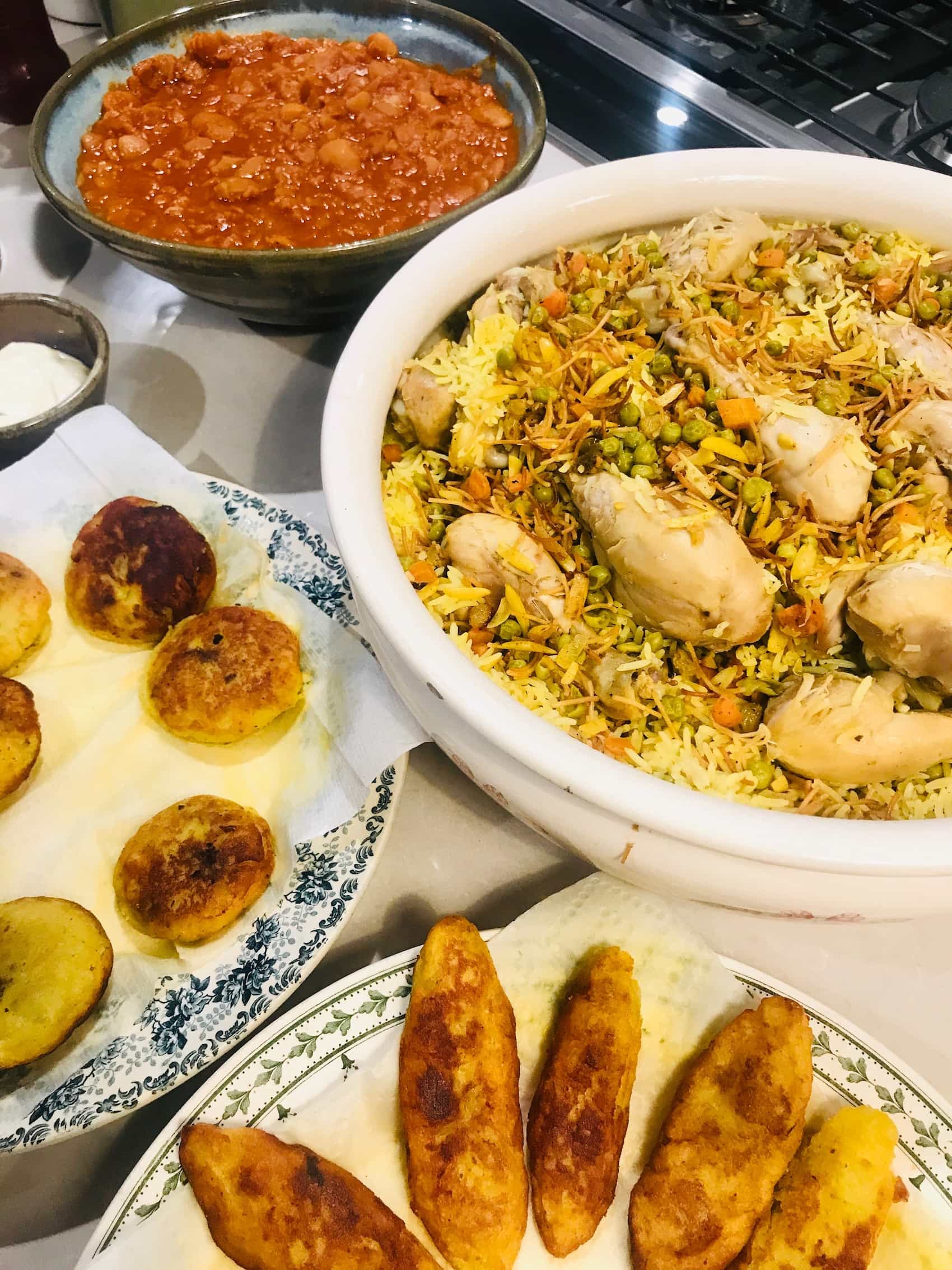 Photo caption: Amrita & the ladies of Fair Trade LA hosted a traditional Iraqi Dinner. The delicious meal was prepared all day and cooked by Sama, an Iraqi Refugee, who shared her story of fleeing to the refugee camps of Turkey before her journey to the US. She now lives with her son in Glendale, California.

As a mission first company, Neococo does not ask for donations nor do they use charity as a marketing ploy. 100% of their revenue is directed back into the company to hire and assist more refugees. To shop directly: