“If every child received an education, 171 million people would be lifted out of poverty.” 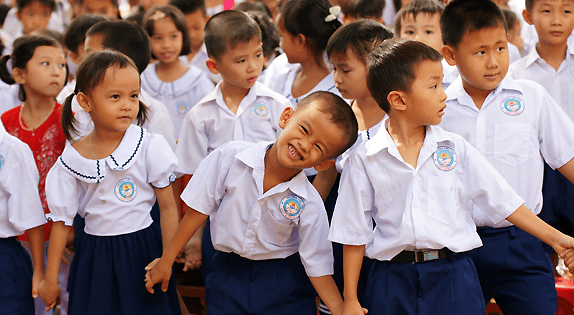 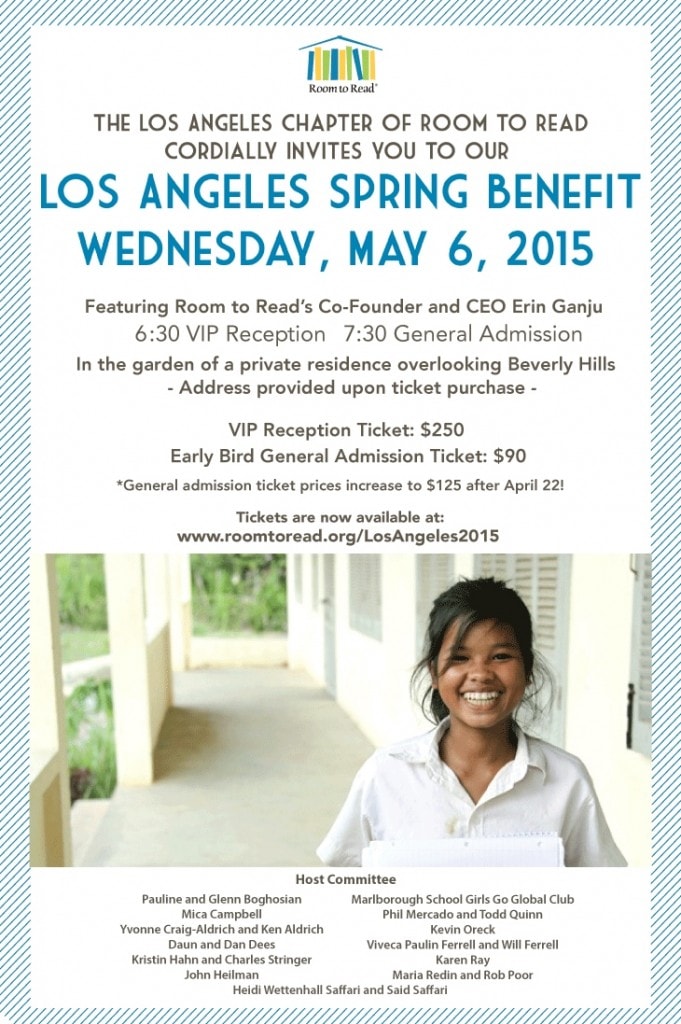 In support of a new global initiative, “Let Girls Learn”, Michelle Obama joined by Mrs. Bun Rany, first lady of Cambodia, recently visited a Room to Read built school in Cambodia. Upon meeting the eager students, Michelle told Phounam, a high school student who was provided the Girl’s Scholarship Program, “There were people who told me that I wasn’t smart enough to go to college and go to law school — but I ignored them. And I want you to ignore them too.”

Room to Read was started in 2001 by former Executive of Microsoft, John Wood, who embarked on a trek through Nepal on his own, noticing that there were no libraries in many schools and decided to quit his job to start this non-profit. I have been passionately involved with Room to Read now for over 4 years and have witnessed first hand the tremendous impact it has made in this world through my visit to Laos in October 2014. Our goal was to reach 10 million children by 2020, but instead we will be reaching that goal this year in 2015!

Please join us tomorrow evening in Beverly Hills to continue our journey in eliminating Gender Inequality & Illiteracy around the World. Event will host live music by DJ Carmen Rizzo, open bar of wine and cocktails, food served in a private estate in Beverly Hills. Silent Auction all night, guest appearance by CEO Erin Ganju to give presentation followed by a Live Auction. 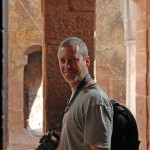 My Interview with Kevin Oreck, founding member and Co-Chair of the Los Angeles Chapter of Room to Read, Architect & World Traveler

What is Room to Read’s Mission? Room to Read is committed to supporting literacy and gender equality in the world through the building of libraries and schools, publishing local language kids’ books, and supporting girls’ education in places where they might not otherwise get it. What began in rural Nepal in 2000 has grown into an organization that works in ten countries in Asia and Africa. We are on track  to impact the life of our ten millionth child this year.

How was the LA Chapter founded? Several years ago, a friend of mine, who is the CEO of a Los Angeles technology company, sent me the first book written by John Wood, the founder of Room to Read, along with a note asking if I would help him found a chapter in Los Angeles. Shortly afterward, a roomful of like-minded people assembled and the Los Angeles Chapter was born.

What drew you to Room to Read the most? I can’t imagine my own life without education or the ability to read. I have traveled extensively, especially in the developing world and have seen firsthand places where education or even books are not available to many, especially girls. No matter what one’s politics are, I think we can all agree that literacy and education make almost every challenge faced by society easier to handle.

I’ve heard Room to Read has many fun events throughout the year! We at the Los Angeles Chapter are always looking for creative ways to raise money for Room to Read. We have done this through “Beers for Books”, which are informal gatherings at bars and restaurants who’ve agreed to donate a portion of the proceeds, an Oscars party with an online pool, an architecture tour, cooking classes, etc. We are planning on hosting some sort of musical event in the near future. But the primary way we raise money is through our annual Spring Benefit.

How was Room to Read created? John Wood, the founder of Room to Read, was on a trek through Nepal, taking a break from his job as an executive with Microsoft. He encountered a library in a village that had only a couple of books. When he asked a village elder what he could do for them, the reply was “bring us books”. After delivering thousands of books to this village, John soon decided to leave Microsoft and create Room to Read.

What is the role of the LA Chapter? Room to Read is a very unique organization in that almost one third of the money it raises comes from its network of all-volunteer chapters like ours around the world. The role of a chapter is to raise money and awareness for Room to Read.

I heard Will Ferrell is a huge supporter. Will Ferrell and his wife Viveca attended our second fundraiser. He was impressed enough by the organization that the following year he hosted his own fundraiser for Room to Read in his home. It was a very successful event attended by the Hollywood elite. He and Viveca have been on the host committee for our Spring Benefit for the last couple of years.

What type of people attend the Spring Benefit? Our Spring Benefit attracts a very eclectic crowd that share a belief in the importance of education. We have people from the worlds of entertainment, art, business, finance, real estate, and technology, as well as many educators.

Tell me about the Spring Benefit on May 6. We primarily raise money for Room to Read through our annual Spring Benefit. We have held it in a variety of interesting venues, such as Vibiana downtown (the first cathedral in Los Angeles), Soho House, and the historic Bullocks Wilshire. This year it will be held in the backyard of one of our donors, at a hillside home in Beverly Hills. We will have great food, an open bar, including a whiskey tasting donated by Moet-Hennessy, music by Grammy-nominated DJ Carmen Rizzo, and silent and live auctions of great items that have been donated to us. The main attraction, however, is the presentation by Erin Ganju, co-founder and CEO of Room to Read. Few people who hear it fail to be moved by what Room to Read does.

What is the goal of how much you’ll raise on this evening? We hope to raise enough that night to teach reading and writing to 6,000 children for a year. An anonymous Los Angeles donor has committed to match up to $150,000 donated at the Benefit, so our goal is within reach.

I heard you recently traveled to Sri Lanka on a Room to Read Trek. Where did you travel to and tell me about your experience? After being involved with Room to Read for a number of years, I finally decided it was time to see our work first-hand. Last fall I had the opportunity to visit Sri Lanka with John Wood and a group of significant donors. It was an incredibly moving experience. To arrive at a school where the entire student body, their families, and the faculty have turned out to greet us and thank us for changing their lives cannot be described. It was also very inspiring to meet the local Room to Read staff. Without exception, everyone involved with the organization was bright, capable, and incredibly motivated. I hope to do it again soon.

Where does the money go? Room to Read is a remarkably efficient organization; approximately 84 cents of every dollar raised goes to the mission. This has earned us Charity Navigator’s top rating for many years. Our Spring Benefit is a good example; we commit to raising at least 10 times what we spend on the event. You’d be amazed how many organizations only break even at their events. The money raised goes to several different programs depending on need. We seek to improve literacy by publishing local language kids’ books, teaching reading and writing, and providing libraries and reading rooms in primary schools. Then there is the Girls’ Education Program, which focuses on girls in need in secondary school. One of the great things about Room to Read is how adaptable they are. So if facts on the ground indicate that one program is more important than another, they will adapt accordingly.

Why should what happens across the World, matter to American Citizens? This is probably the toughest question we get, given the difficulties facing our own educational systems. I would say this; the world is smaller and more inter-connected than it ever has been. What happens in Asia or Africa affects us. An educated populace is healthier, more prosperous, and less susceptible to societal ills such as high birthrate, sexual abuse and trafficking, and, I would argue, war. There’s a reason that the Taliban and Boko Haram target girls in school.

Tell me about your accomplishments today. Since 2000, Room to Read has constructed 1,930 schools, established 17,534 libraries, distributed almost 16 million books, and has 31,636 Girls’ Education participants. For years our goal has been to benefit 10 million children by 2020. As I mentioned before, we will attain that number this year, five hears ahead of schedule.

Future Goals? In the short term, our new goal is to benefit 15 million children by 2020. But our larger goal is to provide every child the opportunity for education, no matter where they live, what their gender is, or how much money they have. It seems less implausible than it did fifteen years ago…